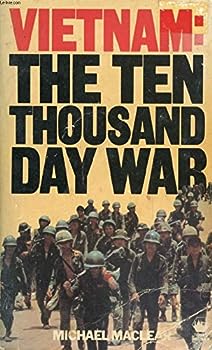 Warfare, US Studies, Veitnamese Studies, Asian Studies This description may be from another edition of this product.

In one 320 page book you can understand what Vietnam was all about.

Published by Thriftbooks.com User , 15 years ago
If you can only recommend one book to your book adverse neocon friends, this is it. Professor MacLear taught at West Point. I have not heard anyone yet on the right accuse West Point of being a liberal institution.

Published by Thriftbooks.com User , 16 years ago
is bollock one of these neo-cons we hear so much of? right wing imbeciles who see threats to mum and apple pie everywhere? haha he maligns a journalist because he's not going along with seemingly every other journalist in america these days, supporting a war on anyone not a friend or puppet to the states. two words: fox news. i bet bollock loves that. all right-wing opinion and very few actual facts. i bet you read that book with a red pen didn't you? and a handgun under your bed. sheesh, what a loon.

Published by Thriftbooks.com User , 22 years ago
The Ten Thousand Day War is the best book on the subject I have ever read. As a student who already knew a good bit about the war, it deepened my knowledge, particulary in the French war in Indochina and America's involvement in it. The book is definitely fascinating and was written after the war ended, giving it a retrospective feel. The book is not extremely long but gives you all the information you will need to fully understand why French and American troops fought and died in a country that most people couldnt find on a map and why it is still a huge controversy to this day. Also, the book doesnt shove opinions down your throat, it is a history of the war and allows you to see the war from different viewpoints with reference to many of the important figures of the war. An excellent read that cuts through the controversy with the facts.

Published by Thriftbooks.com User , 22 years ago
When I first read this book I had little knowledge of the real politiks that were being played out and the reasons why.However, on completion I came to the conclusion that the USA had missed a golden opportunity to secure Vietnam as a loyal ally amongst the Asian dominos.The irony of the whole affair was reinforced in this most informative analysis. What if the US decided to recognise Hoh and his government and ignore the French. It must have come oh so close. While Hoh was a member of the Communist party he was ultimately a nationalist who openly recognised and respected the democratic ideals of the USA. Hoh's numerous (and most polite) written entreaties to Truman and his use of the American declaration of independence go further to support this assumption.Billions of $ were invested by the US supporting the French in the French-Indochina war and then during their own conflict in Vietnam War. What a waste, what a cost...I can't help but think what a difference these $ would've made if US govt in 1945 seized the opportunity and helped Hoh, Giap and co develop the country and build strong diplomatic relations in a very strategic part of Asia proper.The book appealed to me for many reasons, but particularly because of Mike Maclear's impartial, dispassionate treatise of the subject.Australia, like the US, is still coming to terms with its' own Vietnam War legacy. Many veterans are making the journey back to Vietnam to try to heal old wounds - I think that this book should be compuslory reading for all those who were there and for all those who see futility of war.

Published by Thriftbooks.com User , 22 years ago
M.McClear shows the vietnam war began in April of 1945 and lasted until april 1975 exactly 10,000 days. It shows our involvment with Ho Chi Minh in the remote jungles of southeast Asis and how we trained the Viet Minh, and How we promised Ho and Genereal Giap, that they would become the masters of thier own destinies. I shows how we betrayed Ho and allowed the french to return to Vietnam after WW2, and we supported the french effort, by providing them with 2 billion dollars worth of arms and money only to be later banished from France when they closed our post war bases. It shows a dissapointed Ho Chi Minh who quoted our own Declaration Of Indepedence The they took control of the north. It goes on to show our Blunders through out the fifties caused by the Macarthy era, and finnaly our defeat, It is the best and presice book I have ever read covering the Vietnam conflict. Thank You Patrick J. Dunnigan Combat Medic, 199th Light INfatry Brigade
Trustpilot
Copyright © 2022 Thriftbooks.com Terms of Use | Privacy Policy | Do Not Sell or Share My Personal Information | Accessibility Statement
ThriftBooks® and the ThriftBooks® logo are registered trademarks of Thrift Books Global, LLC