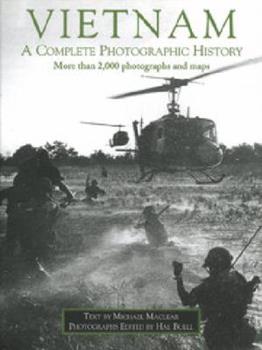 This encyclopedic collection of rare and unusual images from Vietnam has been assembled from hundreds of sources and illuminated with essays by the nation's finest historians. This should be the... This description may be from another edition of this product.

Published by Thriftbooks.com User , 13 years ago
This is an excellent book, containing many photographs- more than 2000 - vividly describing a war that marked the generation that lived through it as young men and women, wether they actually fought in it or not. Europeans saw the Vietnam war as the epitome of US imperialism or as a necessary battle against communism, depending on their political views, but no European university was immune from some "Vietnam Basis Committee" in the sixties. Michael Maclear's book is an excellent way to experience again the tragedies, the agonies, the unbelievable suffering of the war as well as the courage and the gallantry of those who fought on all sides. The book comes as a perfect complement to Stanley Karnow's "Vietnam a History". Unfortunately, the editing of the photographs is somewhat haphazard and the captions are frequently unrelated to the pictures they purport to explain. There are many examples of this sloppy editing until the very end of the book. At the epilogue on page 729, for instance, which features a photograph of what is very obviously a French soldier, probably a Moroccan, one finds the nonsensical caption "Vietminh soldier patrols the countryside in a flat-bottomed boat during the war against the French" ! Other captions contain spelling mistakes; some pictures are displayed twice without any reason (the helicopter taking off from the US embassy on page 715 is to be seen again at page 718);sometimes the same caption is repeated but makes no sense for either picture, etc. All of that is quite annoying to the attentive reader. This review is based on the 2003 edition, for which no compliments should be paid to the publishers, either Tess Press (New York) or Black Dog & Leventhal, also of New York. There seems to be a 2007 edition, hopefully without the same irritating mistakes. Potential buyers are advised to check which edition they pick. Caveat emptor !
Trustpilot
Copyright © 2022 Thriftbooks.com Terms of Use | Privacy Policy | Do Not Sell or Share My Personal Information | Accessibility Statement
ThriftBooks® and the ThriftBooks® logo are registered trademarks of Thrift Books Global, LLC