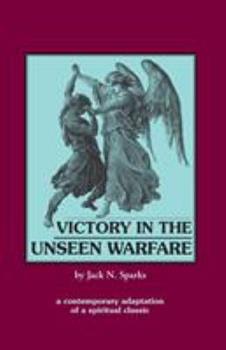 Victory in the Unseen Warfare

Father Sparks has selected passages from this timeless work, reorganized the material, and recast it in contemporary language, all with the lay reader in mind.

A guide for those fighting their personal demons

Published by Thriftbooks.com User , 15 years ago
Father Jack Sparks has created a trilogy of books bringing the 1589 Italian work, Spiritual Combat by Lorenzo Scupoli -- as edited by Saints Theophan the Recluse and Nicodemus of Mount Athos -- into a form that the average, non-scholarly layperson can benefit from. The other two books in this series are titled Prayer in the Unseen Warfare and Vitue in the Unseen Warfare. This volume is filled with teachings of victory over temptations and unseen demons that plague the life of the devout Christian. It is an Orthodox belief that the more an individual strives for holy union with God the harder that individual is attacked by the forces of darkness and ignorance. In this volume, Father Sparks gives the believer spiritual tools with which to combat those forces. The book is broken into short chapters that are easy to read but filled with such great depth of meaning that it takes more than one run-through to really begin to assimilate. Each chapter ends with thought questions, testing the reader's understanding of the text and challenging them to go further into these ideas and into applying them to one's own life. While talk of fighting demons might seem anachronistic or the stuff of fantasy fiction, Father Sparks' book is very serious and any reader who understands that concepts such as "depression," "anger," "greed," "impatience," and so forth are the manifestations of spiritual warfare will understand the everyday applicability of these spiritual teachings for modern life.

Published by Thriftbooks.com User , 20 years ago
Being adapted from a 16th century work intended for Christian monks, one of the advnatages of this book is that it doesn't containt a lot of the modern psychobabble pep talk blabber that has infiltrated so much of 20th century inspiritual Christian writing. You'll find no advice here on how to increase your confidence or build your self-esteem--instead, you'll find out how to humble youself and submit to God's will. ("I must decrease so that He may increase...")While this adaptation is intended for the layman, the original work was intended for monks... but ultimately the battlefield is the same. Monk or layman, all Christians are (or should be) waging war against sin in hopes of achieving union with God--the only perfect love and the only thing needful. This book a VERY helpful aid in that war should we practice what it says and not merely read it.
Trustpilot
Copyright © 2022 Thriftbooks.com Terms of Use | Privacy Policy | Do Not Sell My Personal Information | Accessibility Statement
ThriftBooks® and the ThriftBooks® logo are registered trademarks of Thrift Books Global, LLC