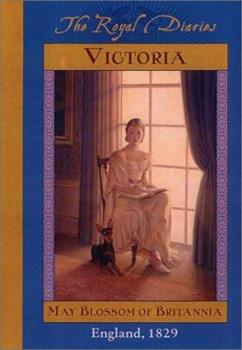 The Royal Diaries: Victoria, May Blossom of Britannia, England 1829

Historical fiction writer Anna Kirwan introduces precocious ten year old Princess Victoria, who starts to keep a diary about her daily life in the Royal Household. She also pieces together the family tree and discovers she is next in line for the throne. She is destined to become the longest reigning queen in England's history. Ages 9-12.

Published by Thriftbooks.com User , 19 years ago
I own this book. I really like it. It's about a young girl who is in the Royal English family. Her life is taken over by Sir Conroy, who is determined to make her a perfect little girl. Victoria can't stand Sir Conroy, and wishes he were sent away. One day, she realizes that after King George IV and Uncle William die, she will be Queen. Then things start to get serious as Victoria is tested by many people, to see how smart she is. Her mother's governess De Spaeth is sent away, and Victoria wonders if anyone else will go, too including her governess Lehzen. It was a very good book, with only a little details missing which is pretty rare for me! You should read this book!

Published by Thriftbooks.com User , 20 years ago
"Victoria" is one of the best books in the Royal Diaries series. In the book, Princess Victoria is a very normal girl, which is rather unlike the portrayals of other young princesses in this series. She has issues with her mother and her pseudo-stepfather. One of the aspects of this book that made it more real was the fact that Victoria, during this time period, was a very distant heir to the throne. Some of the things Victoria said or wrote (i.e. "v. good") were very Bridget Jones-ish. This book was a great read, with a very distinct, witty sense of humor that went with it. Entertaining, with historical merit and value. Highly recommended.

May Blossom of Brittania

Published by Thriftbooks.com User , 20 years ago
Queen Victoria is often underrated, but Anna Kirwan's new work creates a compelling picture of Victoria as a young girl. Kirwan's Victoria is clever and observant and very funny, and reminds us that every dowager queen was once nine and ten and enjoyed playing dress-up. Anna Kirwan's masterful character develpoment makes this a smart and endearing book about a delightful character. The book is obviously impeccably researched, and gives the reader insight into the historical period about which Kirwan is writing. Yay, Anna!!!

Published by Thriftbooks.com User , 20 years ago
Ten-year-old Victoria might be the princess of England but her life is horrible. Being the princess deprives her of all her privacy except for the secret diary which is her only refuge. Her personal thougts can only be a secret there. In her precious diary she describes the fact that her father the former King of England who died when she was just a baby, and the sad fact that she has not a single memory of him, and the fact that for this reason her mother treats her like a baby and won't allow her to have a regular life fearful she would get sick. She also describes her life with the tiresome parties, lessons, and going to the palace by the sea. However she also has bigger things to worry about such as her mother's personal advisor who she feels is up to no good and distrustful while handling the fact the her uncle, now the King of England's health is deterioting. Young Victoria pours her feeling out in this book on her hopes, aspiration, and the duty of being princess that weighs down on her. In this book about the longest ruling queen of England you will truly see the feelings of a young girl who is truly helpless about the world around her but still carries hope. In many ways you can relate some of her life to ours today. I love this new Royal Diaries book and I think this debut title by Anne Kirwan couldn't have been better!

Published by Thriftbooks.com User , 20 years ago
Ten-year-old Victoria is a princess, but her life is anything but easy. Her father died when she was less than a year old, and she has no memories of him. Being a princess means having no privacy, which is why she decides to write her personal thoughts and feelings down in a secret diary. She describes her life at Kensington Palace, attending parties, going on summer holidays by the sea, her tiresome lessons, her dislike and distrust of her mother's financial advisor, her worries over the deteriorating health of her uncle, who is the King, and more. In this book, the young Victoria, between ages ten and twelve, comes alive as a very real girl with feelings, hopes, and dreams. I highly reccomend this newest book from the Royal Diaries series.
Copyright © 2022 Thriftbooks.com Terms of Use | Privacy Policy | Do Not Sell My Personal Information | Accessibility Statement
ThriftBooks® and the ThriftBooks® logo are registered trademarks of Thrift Books Global, LLC