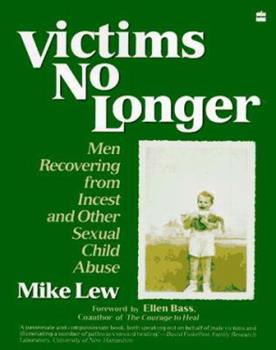 Victims No Longer: Men Recovering from Incest and Other Sexual Child Abuse

For millions of men on the path to recovery, Victims No Longer is the next step. The first book written specifically for men, Victims No Longer examines the changing cultural attitudes toward male... This description may be from another edition of this product.

Published by Thriftbooks.com User , 17 years ago
The very act of reading "Victims No Longer" validates its title. If you have been a victim of child sexual abuse, it means you have taken the first step in your recovery. If you have not been a sexually abused child, you have delved into a subject with unending ramifications for all of us, providing a reason - rather a need - to examine and reexamine the very humanity of our lives. As author Mike Lew says, "Even the best childhood is no picnic," laden with confusing and conflicting messages uttered by larger and older people whose very physical perspective is beyond the reach of a child. So what happens to the abused child, and the sexually abused, whose very core of trust is shattered? And what happens to the millions of male children, traditionally raised to be stoic and unemotional? Here, in "Victims No Longer," there is a finally a safe "place" - a beacon lighting the way to recovery. With vast knowledge in both psychotherapy and cultural anthropology, Lew brings a multifaceted approach to a subject that sadly crosses every cultural and economic group. Filled with wisdom, and written in an easy, humane style, Lew's book is accessible to both victims and professionals. And the testimonies and focus subjects are heartrending and courageous, providing a counterpoint in style and emotionality. Resisting the pedagogical urge to quantify and qualify, Mike Lew knows that this is a subject that necessitates inclusiveness. Victims should not have to compete for the frequency and duration of their abuse; their abuse alone requires the tenderest care. As Lew says, "The most striking feature about sexual abuse is the similarity of its effects on adult survivors." And as he repeats throughout, "No one ever died of feeling." "Victims No Longer," while depicting the basest in human nature, elevates us to the grandest - the ability to recover from bestiality and lead a healthy, productive life. Although this is an updated and revised edition, including a much-needed, new chapter on Clergy Abuse, "Victims No Longer" fills a significant gap in child abuse literature and, like most true classics, is both universal and specific and grows even more relevant with time.

Published by Thriftbooks.com User , 17 years ago
As an avid reader all my 44 years, I never dreamed a book was a true mystical lifesaver! For years, I was threatened into a prison of silence after surviving multiple acts of abuse & carrying deeply hidden scars. I finally knew I had to deal with my horrific male abuse. Typical book addict, I searched for anything on male abuse & was shocked with the lack of materials. Writing for years has been a lifeline for me & through my "black blood" I carried my pain, hoping to hear others in the same boat. I finally found Mike Lew's VICTIMS NO LONGER & after several attempts, I finally faced my anxiety & purchased a copy. It came at a time when I was in the darkest depression. I had just lost both my mom & dad, 5 weeks apart in Fall 1998. Along with complicated grief, I again felt wounds reopened with demonic force. (I had finaly told my mom & dad when I turned 30 & they were shocked that people they most trusted, some loved, had me as a victim threatened in silence for so many years). I am a "myth breaker" in that I hid even from my loving & protective parents, afraid death threats were real-----I was 8 when it all started... I would be amazed as I truly began my healing journey accompanied by the printed caring voice of Mike Lew! One day I hoped to thank him in person for the infinite lives he has impacted with his literary lifesaving!!! His words reach out---heart & soul... The energy of Mr.Lew is empowering! My recovery has been rough at times & I finally had the courage to attend a Male Survivor conference held at Dawn Manor in the Catskills. I KNOW I would never had attended if I hadn't discovered Mike Lew:):):) The Male Survivor group's awesome power reflects Mike! In September 2003, I attended the National Male Survivor Conference in Minneapolis where I finally got to thank Mike in person--- What an indescribable feeling! I hope his words reach countless oters suffering n silence as well as those who are in families & helping professions!! Join me on the Healing Highway coasting with Mike Lew, John C. Ireland:):):)

Helped me to understand, heal from the unfathomable

Published by Thriftbooks.com User , 22 years ago
When the circumstances of my life made it painfully clear that I needed some help, a good therapist put this book at the top of my reading list. Thank God! I'd always considered my childhood mostly tranquil; Mike Lew's book helped me face its traumas. It supportively helped create an emotional haven. It expertly piloted me, by brief sojourns, through the gales of my youth. Its examples revealed the damage which the reefs and rocks had long ago inflicted below the waterline, so I could be healed from it. Twenty years after my abuse, it helped me acknowledge the truth and recover, to accept responsibility for my adult dysfunctions while dealing with their deepest roots. If any adult (or older youth) ever had any sexual contact with you when you were a child, don't wait for your circumstances to force you to deal with it. That person can't hurt you like that anymore! You are no longer small or powerless! Fear not, buy and work through this book, and be healed!

five stars isn't enough for this

Published by Thriftbooks.com User , 22 years ago
Mike Lew's book is the definitive book on recovery for males from childhood sexual abuse. When I first bought it, I was not even able to open it to the blurb page without feeling that finally, there was something that I could use to help...finally there was someone who cared. The book is hard to read. Hard, hell, it is, at times, nearly impossible, but it is also hopeful. Mike Lew is sure to include positive messages directed at the survivor, messages of encouragement and hope. I found myself with tears in my eyes as I saw my story and my life on every page, but I now know that I will survive. If you need this book, first get yourself into therapy, then get this book and take all the time you need with it. Don't rush through it.
Copyright © 2022 Thriftbooks.com Terms of Use | Privacy Policy | Do Not Sell My Personal Information | Accessibility Statement
ThriftBooks® and the ThriftBooks® logo are registered trademarks of Thrift Books Global, LLC