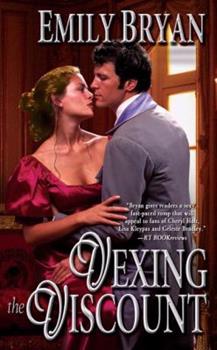 An impoverished viscount hoping to excavate a lost Roman treasure at his family estate enlists the help of an innocent miss he believes to be a French courtesan in exchange for lessons of love.

'Vexing the Viscount' is witty and entertaining: a sizzling Historical Romance that you won't want t

Published by Thriftbooks.com User , 13 years ago
Vexing the Viscount is a marvellous book, full sexual tension and wonderful characters whose stories pull you into their world for a few lovely hours. The pacing is smooth and steady, with vibrant visuals and intensely amusing banter. This story is very well written with an unerring focus on supplying the reader with a captivating story that includes lots of romance. The plot includes some fun twists and turns, that are sure to surprise. Lucian and Daisy are an enchanting mix. When they get tangled up together, sparks fly and sexual tension abounds! These characters have a sizzling chemistry which is sure to satisfy the romantic in all of us. Emily Bryan writes with talent and skill; she pours her heart into each and every page. I really enjoyed this book and I'm positive that you will enjoy it too. I highly recommend this book! (9 out of 10 Diamonds) - Loved it! © 2008-2009 Bobbie Crawford-McCoy (Book Reviews By Bobbie). All rights reserved.

What a great read!

Published by Thriftbooks.com User , 13 years ago
Emily Bryan really knows how to write an interesting story! She knows how to pull the reader in and make them fall in love with her characters. I'm totally in love with Lucian, and Daisy was such a spitfire. Gads, I love heroines like that! I'm a big fan of treasure hunts, and so needless to say, I was following the story to see what the characters would find. Let me tell you, Emily Bryan does NOT disappoint the reader! I'm a devoted fan from here on out. ~Phyllis Campbell~

Innocense should not be confused with Ignorance :)

Published by Thriftbooks.com User , 13 years ago
Vexing the Viscount by Emily Bryan Daisy Drake, always up for an adventure and has a will to learn all she can about erotic Roman sculptures, is about to embark on an adventure of a lifetime. When she has a run in with childhood playmate, Lucian Beaumont, Daisy Drake's safe life will drastically change. A young woman innocent, and pure, will transform herself into a lady of experience; Blanche La Tour, courtesan. If Lucian will not have her as Daisy, then she would have him as Blanche. Lucian Beaumont is on the trail of a buried Roman treasure, when he enlists the society of antiquities for help he is pretty much laughed out of the room. When Blanche insists upon being his partner in the search, Lucian can not refuse. Beaumont will get more than he has ever expected with beautiful courtesan. There is also treachery afoot, sadly it may mean death for some of those involved. While death, treasure, seduction, and love are all in the mix, I'll let you decide which one will win the war. Emily Bryan's historical romances are always amazing, I believe she has outdone herself with Vexing the Viscount. It was a phenomenal read, fast paced, and included strong willed characters, both male and female alike. Vexing the Viscount is that breath of fresh air when you're looking for a relaxing read. 5 Hearts

Published by Thriftbooks.com User , 13 years ago
Over a decade ago, Daisy Drake defeated Lucian Beaumont in a duel with play swords; the scar on his chin is a reminder of his childhood defeat. However, the South Seas Company scandal caused a schism between their families. Now ten years later, Daisy recognizes her childhood friend whom she had not seen in years. They briefly chat before the Viscount leaves to provide a pitch for funding his dig to the members of the Society of Antiquaries as he has recently found ancient Roman relics. No one will support Lucian because his father is blamed for the South Seas Company scandal and subsequent failure; that is no one except Daisy. However, his father holds her uncle culpable for the South Seas Company failure so he cannot accept funds from a Drake if he wants peace. Daisy's great-aunt Lady Wexford was a renowned courtesan "Isabella" who kept a diary that her niece is reading. She also finds the memoirs of French courtesan Mademoiselle Blanche La Tour. With Isabella urging her, Daisy attends her aunt's masquerade as Blanche; in that disguise she becomes Lucian's investment partner and his tutor on pleasing a lady. The only problem is that his kisses leave her wanting more. Daisy really works the story line as she is herself during the day especially with her family, Blanche in the evening especially with Lucian, and Miss Clavenhook with Lucian's father who hates all Drakes and would detest Blanche for bringing more scandals to the family. Her masquerades make for a fun historical romance with a bit of suspense brought by unscrupulous people wanting the ancient loot for themselves. Fans will enjoy Daisy and Blanche VEXING THE VISCOUNT, who falls in love with both "women". Harriet Klausner

Another Win for Emily Bryan!

Published by Thriftbooks.com User , 13 years ago
Emily Bryan's books are such fun to read . . . lively heroines, manly heroes, humor, suspense, and spice -- and they get better with each one. I've been looking forward to Vexing the Viscount ever since finding out that this would be the story of Daisy, the smart young niece of the heroine of Pleasuring the Pirate (Bryan's last book), who I thought nearly stole the story from her aunt. And I'm not disappointed -- Daisy has grown up into an intrepid young woman who is again willing to try almost anything, but now as an adult, the things she tries can get her into more trouble than they could when she was a child! The idea of her posing as a courtesan is both poignant and hilarious . . . the innocent Daisy learns all about it from reading a book, which I have to say makes me laugh with recognition. I've always gone straight to books (or now the Internet) for information on something new, although I'll admit I'm not sure I'd have the nerve to not just learn about how to be a top-notch lady of the evening, but then act on it! The excerpts from Daisy's 'textbook' are perfectly lovely, written with just the right voice of honest instruction. The author's research shows clearly, too, in the setting and voice of the book; I like reading romances of the Regency/Georgian period especially if there's more to them than balls during the Season and country house parties otherwise. The inclusion of the popularity of the time for 'antiquities' and archeology, and of Daisy's interest in such an unladylike pursuit, enhances my enjoyment of the book. Another reviewer thought the storyline was very like Pleasuring the Pirate's, and that may be somewhat true . . . but after all, there are only so many plots available in all of fiction. Whatever similarity there might be, it didn't interrupt my enjoyment of Vexing the Viscount at all -- or reduce my eagerness for the next book by this always-improving and clearly-having-fun author. I used to love reading huge, multi-generational historical sagas, but these days I don't have time or energy for them. Books like Emily Bryan's well-written ones, which I can count on for a bit of humor, saucy sexy scenes, and intelligent, interesting, even eccentric, characters, are just what I'm looking for.
Trustpilot
Copyright © 2022 Thriftbooks.com Terms of Use | Privacy Policy | Do Not Sell My Personal Information | Accessibility Statement
ThriftBooks® and the ThriftBooks® logo are registered trademarks of Thrift Books Global, LLC