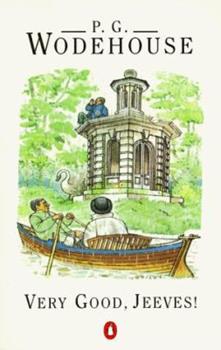 (Book #4 in the Jeeves Series)

Follow the adventures of Bertie Wooster and his gentleman's gentleman, Jeeves, in this stunning new edition of one of the greatest comic short story collections in the English language. Whoever or... This description may be from another edition of this product.

Published by Thriftbooks.com User , 13 years ago
By Jove! This is a wonderful Jeeves offering! No one is better then Wodehouse at putting words together! You will really laugh with this - and perhaps that is just what you need if you are reading this! Go ahead, enjoy! And if you love Wodehouse, here is a very funny who-dun-it and Wodehouse's only mystery - its rare, so enjoy it too! Death At The Excelsior: A British Humor Classic Both very well recommend!

Published by Thriftbooks.com User , 15 years ago
I am a huge Wodehouse fan--so much so that at last count I owned over thirty of his books. This volume contains eleven excellent short stories: Jeeves and the Impending Doom The Inferiority Complex of Old Sippy Jeeves and the Yule-tide Spirit Jeeves and the Song of Songs Episode of the Dog McIntosh The Spot of Art Jeeves and the Kid Clementina The Love That Purifies Jeeves and the Old School Chum Indian Summer of an Uncle The Ordeal of Young Tuppy In my opinion, no one does comic short stories better than P.G. Wodehouse; these are among his very best. Good-hearted Bertie Wooster and Jeeves, his gentleman's gentleman are winning pair, Plum's crowning achievement. The supporting cast of characters (Bingo Little, Tuppy Glossop, Roberta Wickham, Aunt Dahlia and the dreaded Aunt Agatha) are also memorable. First published in 1930, there is a timeless quality to these tales. As much of the humour is based on human nature, modern audiences can relate--we all have interfering relatives and hapless friends. The situations Bertie finds himself in amusing and the dialog is full of carefully crafted zingers. Many of these stories were adapted for Granada's Jeeves and Wooster series, available on DVD. Produced in the early 1990s, the show starred Hugh Laurie (House) and Stephen Fry, who did a superb job bringing the characters to life. The DVDs are an excellent introduction for the Wodehouse novice and a visit with old friends for those of us who already love Wodehouse's world. Both book and DVDs are highly recommended.

Published by Thriftbooks.com User , 20 years ago
Previous: Carry On, JeevesThe third and last short story collection, this volume contains some of the very best Jeeves and Bertie stories, again, stand-alone and unrelated. My favorite in this collection-and my favorite short story overall-is the brilliant Jeeves and the Impending Doom. Not only is the plot wonderfully eccentric, Jeeves manages to get in a very subtle jab at Bertie's intelligence which is particularly well-timed and memorable. Notable also is Jeeves and the Song of Songs, which is outright hilarious. And notable primarily for the irony of the story is The Love that Purifies, in which the kids vow to live upright lives, while the adults go out of their way to corrupt them into bad behavior. Memorable and hilarious stuff!Next: Thank You, Jeeves

Published by Thriftbooks.com User , 20 years ago
This collection of short stories from the Jeeves and Wooster series was first published in 1930. If the proof of classic status lies in how well a book stands the test of time, then this volume is indeed a classic. All eleven stories herein are excellently written and slyly humorous. Wodehouse once remarked that his stories were the opposite of "real world" stuff and in a way that is true, as his created world of Bertie Wooster and his butler Jeeves is in many ways a delightful fantasy. Having said that however, Wodehouse's comic situations and droll characterizations and observations reveal that he knew a lot about human nature. Like James Thurber his humorous fantasy is both an escape from and simultaneously an insight into human relationships and social situations.One reviewer once remarked of this book's stories that "everyone was the best," and I'm tempted to agree, as all are worth reading and remembering. Perhaps my own favorite is "Jeeves and the Old School Chum" in which Wooster's former school mate newlywed Bingo Little suffers unmercifully from the ideas foisted on his romance novelist wife Rosie M. Banks' way of thinking regarding the pleasures of the dinner table, due to a visit from her "old school chum" Laura Pyke. Pyke is a "food crank" who (horrors) forces the rest of the household to abstain from cigarettes, alcohol, and most nourishment this side of tofu and bean sprouts for a time. Visiting Bertie suffers along with his buddy Bingo until such time as Jeeves can put things right. Along the way Bertie learns a little about the realities of marriage (the husband is master in his own home, unless the wife has an opposing viewpoint), the proper tactics for a male when intervening in an argument between two ladies (don't!, imitate the opossum and play dead), and how to bargain with a surly homeowner who has just gotten the baby to sleep (you'll have to read the story to find this one out).A simply worded plot summary such as this can't even begin to come close however to conveying Wodehouse's command of the English language and his gift for humorous understatement. He has to be read to be truly appreciated. My own wish to anyone reading this review is for you to certainly find this volume or another one of the novels or short story collections in the series and give them a try. You won't be disappointed.Also, if you haven't seen the PBS videos of the series starring Hugh Laurie and Stephen Fry then I would strongly suggest checking them out. Several of the first season's episodes were inspired by the stories in this volume, and the series did an excellent job of conveying the warmth and humor of the stories to the screen. Watching them can only add to the pleasure of reading the stories. Still, reading Wodehouse is the best. I highly recommend him.

Wodehouse's Wit at Its Highest

Published by Thriftbooks.com User , 22 years ago
Any book from the Jeeves-and-Wooster series is a treasure, and this volume from well into the series is no exception. Bertie Wooster's world is one of elegance and pith, of high society and low comedy, of fun and foibles, homicidal swans, leaky water bottles and near death from starvation at the hands of a food faddist. Bertie is--how should one say this?--not the brightest jewel ever to have emerged from the British educational system and he relies on his gentleman's gentleman Jeeves, a butler with more than enough wit and savvy to save Bertie from the many scrapes he gets into. Jeeves usually has a knack for doing the "wrong" thing that turns out to be the right thing.When these stories were written in the period between World Wars I and II they were social satires; now they are period pieces and must be considered as such. The wit is cracker-dry, especially some of the rejoinders emanating from Jeeves that can be read on two levels, one straight-faced and one slyly derisive of Master Bertie. We don't have the kind of finicky class distinctions outlined in these books (or so we are told), so perhaps the charm of this type of humor lies in the long view. Suffice it to say that Bertie and Jeeves are already staking a claim on immortality, and their books are selling as well as ever. If you like wit, funny situations, or just things British, pick up this book and give it a try.
Trustpilot
Copyright © 2022 Thriftbooks.com Terms of Use | Privacy Policy | Do Not Sell My Personal Information | Cookie Preferences | Accessibility Statement
ThriftBooks® and the ThriftBooks® logo are registered trademarks of Thrift Books Global, LLC