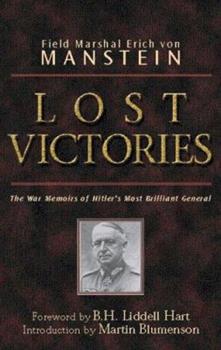 Lost Victories: The War Memoirs of Hilter's Most Brilliant General

Originally published in Germany in 1955, and in England and the United States in 1958, this classic memoir of WWII by a man who was an acknowledged military genius and probably Germany's top WWII general, is now made available again. Field Marshal Erich von Manstein described his book as a personal narrative of a soldier, discussing only those matters that had direct bearing on events in the military field. The essential thing, as he wrote, is to...

Published by Thriftbooks.com User , 16 years ago
The five stars is for what it is supposed to be-- a detailed military memoir by an exceptional leader of German armed forces. Manstein was by any judgment a first rate staff officer, who excelled with troops and shone in use of combined force tactics and strategy on a large scale. His impact in WWII was immense -- on both the Western and Eastern Front. He was also convicted for war crimes and served four years of an 18 year sentence noted in a 1981 introduction. That is not noted in the original edition which I also have. He was not a political general, i.e. he was not a Nazi Party member and had long credentials as a professional soldier and offspring of professional soldiers. He had Hitler's ear frequently and stood up to him more than most. Evidence (from other sources) indicated that one of his orders referred to a need to eliminate "Jewish Bolshevism" once and for all. There's no point in retrying his case here,but it does affect the way some of his writing is interpreted. Some of his comments should be read knowing that he had only recently been released from prison. Manstein had a stellar reputation before the war, although he angered some old guard when he waffled on a plan to confront Hitler. In a critical phase at the opening of the war, he was chief of staff to von Rundstedt and took part in military planning. Some of his innovative proposals were passed over. As the Germans planned their attack into France, the Belgians captured some of the Fall Gelb, or Code Yellow plans, essentially another revision of the basic Schlieffen used in WWI. The allies were pleased because it confirmed their basic planning in reaction to such an invasion. The Germans, however, knew that the Allies knew. So the plan was revised again. Rundstedt and Manstein had already been pushing for the plan. An interview was arranged with Hitler. Manstein describes a HItler who was engaged, understood the concepts and had an excellent grasp on technology. Manstein immediately by memo recounted Hitler's agreement with his plan and the final order included its elements. No military plan for large troop movements is ever simple. A critical element in Manstein's plan was sending a major force with tanks through the Ardennes, something thought too difficult. If the plans early phases were successful, the Allies would have little chance to recover. He and most authorities credit the Ardennes drive, orchestrated by Rundstedt and Guderian and not without difficulty, as the major factor in the utter defeat of the Allies in Northern Belgium. Germany held back its armor, leaving mopup to infantry and aircraft. That allowed the evacuation of nearly 340-thousand troops including 26,000 French to be evacuated. Manstein cites three possible reasons; Goring's ego and m aking peace with Britain were two. The third is currently considered the most likely, that Hitler acceded to his generals who wanted to save their armor for the second phase of the French campaign. As Manst

Gen. Manstein's Own Account of His Amazing WWII Victories

Published by Thriftbooks.com User , 17 years ago
By the end of WWII, General von Manstein was widely recognized by most German soldiers as the Wehrmacht's most brilliant strategist, a man of honor, and easily the most obvious choice for the Wehrmacht's Commander-in-Chief. Manstein was responsible for formulating most of the strategy that won Germany its great early victories using blitzkrieg tactics in Poland, France, and the Crimea. From Fall 1942 - Spring 1944, Manstein's heroic efforts against hugely overwhelming odds consistently frustrated every attempt to cut off and destroy Germany's armies in the Ukraine. With tight battlefield coordination, he focused his armies' efforts on the decisive point in each desperate Russian Front battle and ALWAYS snatched a tantalizingly close victory away from huge encircling Russian army groups. Manstein recalls the internal struggles within the Wehrmacht regarding strategy formulation, internal organization, and resource allocation. He was apparently one of the few German generals to seriously and openly challenge many of Hitler's decisions. His analysis of Hitler as a military leader is quite fascinating and unusually balanced. Manstein actually gives Hitler some credit in his strategic analysis. But, Manstein also rightfully and strongly critiques Hitler's disorganized, dictatorial leadership and his increasingly blind faith in the power of will versus massive, well-supplied Soviet armies. Time and time again, Hitler's interference in Manstein's army group operations left much of Manstein's forces perilously exposed to Soviet encirclement. By Spring 1944, Hitler tired of Manstein's repeated demands for a Wehrmacht C-in-C and feared his increasing personal prestige - forcing Manstein's resignation and retirement from the army. I've read several other books on the Eastern Front, as well as books on the Wehrmacht's internal organization, and I still learned a lot about the Russian Front battles. Manstein analyzes Poland, France, the Crimea, Stalingrad, Operation Winter Storm, the fighting withdrawal from the Caucasus, Kursk, and his desperate battles in the Ukraine. Sometimes the action is difficult to follow. While there are several maps, the text often refers to locations not indicated on the map. (My standard gripe - not enough detailed maps to go with the text.) Overall, a well-written, informative, and excellent account of most of Germany's main war efforts by the man who was there leading them.

Published by Thriftbooks.com User , 18 years ago
This book will be valuable to a military historian and possibly even to officers in the current military. What I found most interesting was Mansteins firsthand accounts of the decision-making process that Hitler and the commanders of the Wehrmacht went through; their urgency to invade France in 1939. If you're interested in the personal experiences during the way, Manstein talks about places he stayed in France during the offensive of 1940, experiences with the people on his staff, and conditions he himself endured in Russia. Also interesting is the conflict he depicts between hitler and the army chief of staff. He does much to argue how the outcome of the war could have been much different had Hitler left military decisions up to his generals.All in all, for me, there were parts with so much tactical detail I got a bit bored and skipped ahead, but if that is what you are looking for, this book is excelent for you.

Published by Thriftbooks.com User , 22 years ago
General Feld-Marshall Erich von Manstein explains the personality of Hitler and the essential differences between the OKH (oberkommando des heer) and the Fuhrer. Beginning with the Polish campaign, the Feld-Marshall explains how the OKH became subordinated to the central high command (OKW) or oberkommando des wehrmacht. This cripples the German Army leadership and places it at Hitler's heel for the entire war, with disastrous consequences for the Eastern Front and the West as well. Von Manstein demonstrated his abilities with his plan for the attack on the West and his near salvation of 6th Army at Stalingrad. In fact, his alternative plan at Kursk, to attack straight into the salient rather that on its flanks might have spelled German victory. This is a must read for historians interested in the ground war in Europe, especially the early war in the West and the war on the Eastern Front.

Published by Thriftbooks.com User , 24 years ago
Field Marshal Fritz Erich von Manstein's (born Lewinski,) credentials as the most successful Axis Commander and strategist of World War II and are impeccable: as Chief of Staff of Army of Group South in the Polish invasion in 1939, he directed the decisive German Armies in the first blitzkrieg. The Manstein Plan was the Battle of France in 1940, resulting in the 6 weeks' defeat of France, and the banishment of Manstein to the command of an Infantry Corps, for his forceful advocacy (of the plan). As commander of the 56th Panzer Corps he led the dash to Leningrad in the Russian invasion of 1941, consistently outrunning more powerful neighbouring formations. Made commander of 11th Army in the Crimea later that year, he was promoted to Field Marshal after successfully concluding this campaign in 1942. 11th Army was then moved north to Leningrad at the very time of the main German offensive in the south in 1942. After the Stalingrad encirclement of November 1! ! 942, Manstein was again moved south to command Army Group Don, and would have been successful in relieving the encircled Sixth Army, had Hitler allowed it to meet its rescuers halfway! After the disaster, Manstein held open the escape route for Army Group A, which was almost trapped in the Caucasus, and whose destruction would have led to an early German defeat. He counterattacked around Kharkov in spring 1943, regaining that major Soviet city and stabilizing the long Southern front. As Commander of Army Group South, which formed the Southern Pincer in the gigantic armoured battle of Kursk in summer 1943, Manstein reached most of his objectives while the northern pincer faltered. Hitler again lost his nerve when the Allies invaded Sicily, calling off the attack when Manstein said victory was at hand. The initiative in Russia was ceded to the Soviets after Kursk, with Manstein destined to fight defensive battles until relieved by Hitler in 1944. A critic of the dictat! ! or's military views, even in his presence, Manstein's pers! istent urging of Hitler to appoint a military commander in the East finally led to his downfall. This book reveals Hitler's military shortcomings from the very beginning of the war: 1-The successful Polish campaign was devoid of interference by Hitler. 2-The successful invasion of Norway in 1940 was Admiral Raeder's idea, not Hitler's. 3-The original plan for the French campaign in 1940 was aborted by the allies' capture of the original German plan; Manstein seized the opportunity to present his own plan to Hitler, which became the instrument of victory in the stunning 6 weeks-defeat of France and Britain. At Dunkirk, Hitler deliberately halted the panzers and allowed the British Army to evacuate. 4-The Battle of Britain: lost because of not having a plan. Even after the failure to win the air battle, an invasion of the island presented a high probability for a war-ending victory; conversely a German defeat would not have been decisive.
Trustpilot
Copyright © 2022 Thriftbooks.com Terms of Use | Privacy Policy | Do Not Sell or Share My Personal Information | Accessibility Statement
ThriftBooks® and the ThriftBooks® logo are registered trademarks of Thrift Books Global, LLC