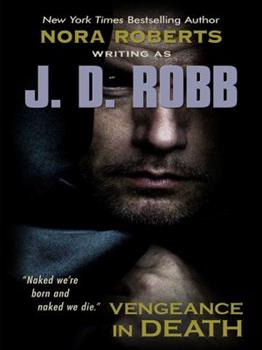 A New York Times Bestselling Author -- He is an expert with the latest technology ... a madman with the mind of a genius and the heart of a killer. He quietly stalks his prey. Then he haunts the police with cryptic riddles about the crimes he is about to commit. Police lieutenant Eve Dallas found the first victim butchered in his own home. The second lost his life in a vacant luxury apartment. Both had ties to an ugly secret shared by none other than...

Published by Dana , 2 years ago
It's Nora, so how can you go wrong? You can't. What a great story. In this one, their marriage is new and they're both struggling to stay true to themselves and each other. The murders in this story hit close to home. Close to Roarke and his questionable past, putting Eve in a tight spot. Her marriage or the badge? Can she find a way to have both? and this is the one where Peabody and McNabb first meet.

Published by gmmarge , 3 years ago
This is an exciting story that delves into Roark's past. The love between Dallas and Roark deepens. The who of who done-it is cleverly secret until the end.

Published by Thriftbooks.com User , 21 years ago
Vengeance in Death, there is a series of brutal murders involving torment and mutilation. Eve discovers that all the victims had assisted Roarke in his quest for vengeance for the murder of Somerset's daughter back in Ireland years ago.. Somerset, Roarke's butler has been jointly for many years coming to America together from Ireland. Roarke feels he partly responsible for the death of Somerset's daughter even though Somerset doesn't feel this way. The murderer sends Eve riddles before each murder. And she persecutes over each riddle believing that if she can solve the riddle in time she might prevent the murder from happening. Somerset's is really developed in this book as he is framed and made to look like the murderer. This was the best in this series yet. This series offers a perfect blend of suspense, romance. It is fast paced and full of action. I recommend this series to everybody. You won't be disappointed but start with the first book!

Vengeance in Death is a winner

Published by Thriftbooks.com User , 21 years ago
In this latest installment in the "...in Death" series, Vengeance in Death, there is a series of vicious murders involving torture and mutilation. Eve discovers that all the victims had assisted Roarke in his quest for vengeance for the murder of a young girl back in Ireland. The young girl was Somerset's daughter. Somerset is Roarke's butler and they have been together for many years coming to America together from Ireland.The murderer sends Eve riddles before each murder. And she tortures over each riddle believing that if she can solve the riddle in time she might prevent the murder from happening.Somerset's character is largely developed in this book as he is framed and made to look like the murderer, also implicating Roarke. Eve decides to take the investigation underground or risk making Roarke look like the prime suspect.Figuring out the murderer was difficult and entertaining. Another excellent book in the series.

Best in the series! (so far)

Published by Thriftbooks.com User , 23 years ago
I have enjoyed every book in this series. Since I've been reading them in order, I have one left to go (Holiday in Death), but so far, this was the absolute best! I used to read Sci Fi, then I switched to Romance, then I found this: tight, action-filled, police investigation starring a tougher-than-nails heroine and a gorgeous, loving, rich hero. In a futuristic setting!! Could I ask for anything more? In each book, I look forward to the fabulous "gadgets" of the year 2058: the Autochef, the voice-controlled shower, etc. I adore Eve. I adore Roarke. I adore them together. But this book seemed to show them in even more depth. Without giving too much away, my favourite scenes were THE FIGHT, where (for once) Roarke stands up for himself and doesn't let (Darling) Eve bully him. The scene was heartwrenching, funny ("neurotic snits") and sexy. The explosion scene was gripping, the raspberries on the bed scene was howlingly funny and the car speed chase took my breath away. Read every book in the series! In order! Get to know Eve and Roarke slowly. You won't regret it. They never fail to satisfy. I'm on to the next one - Holiday in Death.(P.S. They are quite gory, so be prepared. Skip over the really yucky parts.)

J.D.Robb a.k.a. Nora Roberts Does It Again With Style!

Published by Thriftbooks.com User , 24 years ago
Vengeance in Death as well as the rest as the "Death" series is rated the highest with me because the author takes you into the lives and emotions of the main two characters of Eve and Roarke. Also, the characters of the fellow cast is slowly evoving with each new book. I had a friend read my copy who could not get past the use of futuristic language/tech terms. I didn't see the problem with the idea of licensed companions, etc. The book is not about the future itself, but the lives of those living in it. If you're looking for a good, suspenceful book that keeps you guessing as to the bad guy with the addition of an evolving love story, then this book is for you!

The best by the best

Published by Thriftbooks.com User , 25 years ago
Homicide detective Eve Dallas knew when she married her powerful billionaire husband Roarke, that there were events in his past she would rather not know about, especially his criminal activities. These acts conflict with Eve's code of ethics as an honest homicide detective. When a series of vicious murders involving torture and mutilation, occur, Eve realizes that all the victims assisted Roarke on his personal quest for vengeance. Eve faces the biggest crisis of her career and her marriage as she is confronted with choosing between love or honor. VENGEANCE IN DEATH is the kind of novel that readers expect from the very talented J.D. Robb. The pace is fast, the action is explosive, and the relationship between the hero and heroine fresh, red hot, and poignant. This book is a keeper to treasure during times of stress. Harriet Klausner
Trustpilot
Copyright © 2022 Thriftbooks.com Terms of Use | Privacy Policy | Do Not Sell or Share My Personal Information | Accessibility Statement
ThriftBooks® and the ThriftBooks® logo are registered trademarks of Thrift Books Global, LLC