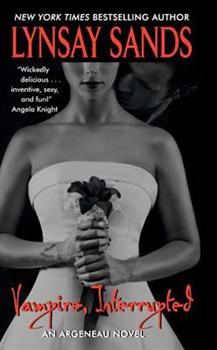 (Book #9 in the Argeneau Series)

After seven hundred years of life, Marguerite Argeneau finally has a career. Well, the start of one, anyway. She's training to be a private investigator, and her first assignment is to find an immortal's mother. It seemed simple enough, until Marguerite wakes up one evening to find herself at the wrong end of a sword. Now she realizes she's in way over her head. Julius Notte wants to protect Marguerite, and not because someone just tried to take her...

Margarite's story is definitely one of the most in depth

Published by Michi , 2 years ago
I absolutly adore the argeneau series!! Lynsay sand puts together a great story filled with romance, thrills, humorous wit, charm etc. I always find myself chuckling or biting my lip in anticipation of whats to come while i devour the stories. Absolutely recommend!!

Published by Thriftbooks.com User , 13 years ago
VAMPIRE INTERRUPTED I didn't care for the last two Sand's books and hence my last two reviews on these series have been negative. I was hard pressed to pick up another Argeneau novel as they were starting to get monotonous and rather stereotyped. The rave reviews here made me give it a try. And for which I am so glad!!!! This is by far the best Argeneau novel in the series! In VAMPIRES ARE FOREVER - Sands set up a series of events that were terribly confusing but now, after reading VAMPIRE INTERRUPTED make sense. VAMPIRE INTERRUPTED takes up right where VAMPIRES ARE FOREVER finishes and is told from Marguerite Argeneau's perspective. Having raised four children - and successfully found lifemates for all of them - and most of the Argeneau clan - Marguerite decided to take on a new career and try out her sleuth skills as a private detective. She is hired by Christian Notte - an immortal searching for his mother. Christian's father - Julius Notte will not tell is son who his mother is. To him she is dead - and that is the end of it. Julius and Marguerite have met before - though she doesn't recall. He's also met Jean Claude Argeneau - Margeuerite's now deceased husband. Marguerite's marriage to Jean Claude was a living nightmare, something she doesn't discuss and above all is not going to repeat. However - Marguerite feels drawn to Julius - even as she lacks trust in him due to the fact that she is surprised that being Christian's father, he will not reveal to his own son who his mother was. Marguerite's past contains answers to some of the weird events taking place - as all traipse to York in England - with hopes that the city will reveal some of the answers everyone is looking for. Not as humorous as her previous books, VAMPIRE INTERRUPTED carries a more serious overtone. The attraction between Julius and Marguerite is palpable, yet there is obviously more to it than meets the eye. Both ancient immortals that have met in the past. The plot was very inventive, well written and kept me on my toes - wanting to find out who the villain was and who in the end was Christian's mother. Even the title was very ingenious! I do, however have to agree - with most reviewers here - that the editing was lousy!! The book is liberally sprinkled with error after error! Lynsay Sands needs to get new editors for sure. It ALMOST ruined such a fabulous book - ALMOST! Please try to overlook that and read this great novel - perfect plot telling Marguerite Argeneau's story. Lynsay redeemed herself with this one!!

Another solid novel from Sands

Published by Thriftbooks.com User , 13 years ago
I've come to love the way Ms. Sands writes her novels. Her novels are very witty, charming and it was nice to finally see Marguerite happy. In Vampire Interrupted we are finally given the story of Marguerite Argeneau the matriarch of the Argeneau line. Training to become a private investigator Marguerite's first case (finding the birth mother of immortal Christan Notte) takes a turn for the worst, when a killer in black suddenly appears his eyes set on Marguerite or at least her neck. Luckily for our heroine Julius Notte is there to protect her... too bad for her she can't decide whether she should kiss or strangle him. This novel is full of plot twist and character insights. I loved it and read it in one night unable to tear myself away from it. unfortunately as a couple of others have previously mentioned it is also full of grammatical errors and one hell of a spoiler.

Published by Thriftbooks.com User , 13 years ago
I have to say that I was highly disappointed in the Vampires are Forever book but this one redeemed the series. This was probably my favorite of all. I understand what she put it in the front of the book, but I was still completely blown away when it came out that she was his mom. I thought maybe there was an editing error in the front that put Christian under her name instead of Julius's but it still didn't ruin the story. And the way it all happened with her being his missing lifemate was genious. I never would have saw that coming. I would recommend this book to anyone who has read the other books in the series. I hope she writes a book for Tiny because I have become fond of him. I think it would be cute for him to hook up with Juliana or Victoria, or even Mirabeau but that is my opinion. Over all I thought that this was a great book and it was totally worth what I paid for it. I also love how in the last few books she has been bringing the families all together around the end to catch up with them. Too cute about Lucian and Leigh. Congrats Lynsay on a great book!!!

She does it again

Published by Thriftbooks.com User , 13 years ago
Lynsay Sands does it again! i have read all of the Argeneau family series books and this one is as good as the rest. Vampire Interrpted tied up a lot of the hanging questions from the last 4 books. You finally discover what happened to Marguerite and the book has tons of exciting twist and turnsto keep you very intrested not to mentain a fabulous love story. I have read over 60 vampire books and must say I am a little obsessed. Of all the books i have read her vampires are definetly one of the best. If you have never read one of her novels i would highly suggest them. Vampire Interrupted was one of the best in the series and answere a lot of questions. Even if you are not a vampire fan i would stilll recommened her book to almost anyone. Lynsands definetly produced another amazing book!

4.5 stars - A Few Surprises Are In Store When Matchmaking Momma Marguerite Finds Her Own Mate

Published by Thriftbooks.com User , 13 years ago
With Vampire Interrupted Sands wraps up a great Argeneau vampire romance in a much deeper and complicated plot than usual and includes several twists that end up making this a fresh addition to her long running series. Finally it is Argeneau matriarch Marguerite's turn to find her lifemate after playing matchmaker to all of her extended family in the previous books. Knowing of Marguerite's hellish 500 year marriage to a vamp who was not her lifemate, it is not surprising that Marguerite is a bit cautious when she first begins feeling the heated pull to gorgeous Julius Notte. Julius doesn't seem to feel the same reluctance to persue Marguerite as a lifemate even though he has lost a lifemate in the past, a relationship he refuses to discuss. It is actually this lack of disclosure that fuels his son Christian's search for information on the mother he never knew, and it is that search that brings Julius and Marguerite together as the case to uncover the truth is Marguerite's first in her new career as PI. But even as Julius promises not to hinder Marguerite progress, there is a mysterious assassin that keeps trying to take Marguerite out of the picture permanently. Determined not to suffer the anguish of loosing a lifemate again, Julius will do everything in his power to keep Marguerite safe, but will he reveal the painful secrets that have been hidden for centuries? Without revealing any of the surprises, a nice thing about the romance between Marguerite and Julius is that both characters are presented as more mature than the leads in Sands previous romances -- even though Marguerite's son Lucerne is in reality only a hundred years younger. And because Marguerite and Julius are older characters, both have major past relationship issues that they have to overcome to be together. For Julius part of his past to overcome is that his loss changed him into a darker, more serious and grumpier person, so in the book it is fun watching him get hints from his son and a quirkly mortal on how to court a woman again after being alone for so long. Marguerite's martial nightmare makes her more cautious with Julius, but having known such unhappiness, it also makes her more suseptible to the lure of a happily ever after even though that sounds like a contradiction. I liked Vampire Interrupted and it works fine as a standalone read, but it is original enough that you will still enjoy it even if you thought you were getting tired of the Argenaus. And if you can't get enough of them, Sands does a nice family reunion at the end of Vampire Interrupted bringing all the pairs together at Lissiana's child's christening. Sands has started including a Argenau family tree in the front of her books, so hmm, who's next? (Unless you have the ARC version of this book, heed the other reviewers' warnings and don't check out family tree until after you've read the book.) The rest of the books in Lynsay Sands Argenau series: A Quick Bite ( Book 1) Love Bites (Argeneau Vam
Copyright © 2020 Thriftbooks.com Terms of Use | Privacy Policy | Do Not Sell My Personal Information | Accessibility Statement
ThriftBooks® and the ThriftBooks® logo are registered trademarks of Thrift Books Global, LLC