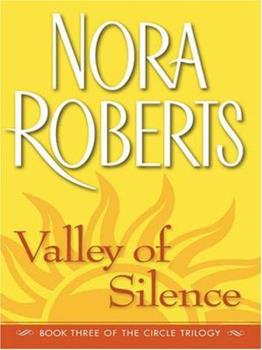 (Book #3 in the Circle Trilogy Series)

Book 3 in The Circle TrilogyA #1 New York Times Bestselling AuthorThe Valley of Silence is a forbidding place for the battle of all battles, but the circle continues to prepare through magic and a few early stakeouts that test their strength individually and as a team.Moira finds herself playing the roles of warrior and royal, as she follows the tradition of her people and prepares to take the crown before leading them into battle. And if that isn't...

Published by Thriftbooks.com User , 14 years ago
As I read the last few pages this afternoon I was caught in a bittersweet battle of not wanting the story to end and yearning to read the finale. What a great book and a great trilogy. With the complex nature and background of Cian I would love to read about his journey through his life of being "damned" and his transition into "normal" society. I think we need some more of him. What an amazing character.

Published by Thriftbooks.com User , 14 years ago
Just when you think you've read every story Nora Roberts could possibly imagine, she surprises you once again with an amazing tale of good vs evil, time travel, sorcerers and shape shifters, dragons and vampires. I listened to the audio version. Dick Hill mesmerizes with his flowing Irish brogue. You are transported to Ireland, sitting at his feet with the children, listening to the tale and hanging on every word. I was angry, I cried, I laughed, and I fell in love with a vampire. This is a story that will delight and enthrall every reader.

Published by Thriftbooks.com User , 14 years ago
I don't buy vampire books (with the exception of "Dracula") and I'm not into the idea of romantic vampires. Because of this, I didn't buy any of this trilogy until after the 3rd book was published. Even then, I bought the 3 books on ebay because I just didn't think they would be worth the (full) price. Frankly, I would never have bought them but I really enjoy Nora Roberts' books. I finally decided to read Book 1 when I had nothing else to read. By the end of the first chapter, I was hooked. I read all three books in 3 days. I just couldn't stop reading! For anyone who doesn't want to buy this trilogy because they are "vampire books", don't let that stop you. The story isn't about vampires roaming the earth - it's about so much more. Friendship. Love. Courage. The ultimate fight between good and evil. Willing to sacrifice everything for the better good. I found myself crying before the end of the third book, even though I knew it was "only a book". I absolutely loved this series and was saddened when it ended. I wanted to know what happened next, which is something I've rarely felt in many years of reading. And now I'm open to more books of this genre.

Published by Thriftbooks.com User , 14 years ago
With each passing day, the circle of six move closer to battle. It is within the Valley of Silence that the six, backed by their army of the people of Geall, will fight against the evil of Lilith and her army of vampires. It is here in the Valley of Silence that courage and honor will be tested. Where the fate of not only Geall, but all worlds, is at stake. It is here that the fight between good and evil will be waged. Where a newly crowned queen will lead her people, joined by her circle of six, to fight the evil of a centuries old vampire. Nora Roberts made me cry. There were scenes in Valley of Silence that just made me sob. For me, Valley of Silence is the most emotional of the three. And that is high praise. If a book makes me feel so strongly that it effects my emotions, it is a very, very good book! I loved this entire trilogy but I will admit, the love story between Moira and Cian was the one that I was on pins and needles waiting to arrive. I love Cian, especially his darkness and wit. And I totally can relate to Moira. I just love them both! The action and suspense of the Circle Trilogy carried through every book. Thrilling, suspenseful and full of delicious love stories, I cannot sing the praises of Nora Roberts' new trilogy enough! I loved it and I am sure you will too! Annmarie Reviewed for Joyfully Reviewed

A very satisfying conclusion to the trilogy.

Published by Thriftbooks.com User , 15 years ago
Action, Romance, fantasy, Drama and Horror. Author Nora Roberts has managed to blend all these elements into the final Circle of Six book making it a satisfying read. The book deals with the final days leading to the big battle in the Valley of Silence on Samhain. Moira pulls up the legendary sword from the rock and is declared the queen of Geall. The circle of Six consisting of the sorcerer Hoyt, Hoyt's vampire brother Cian, the witch Glenna, the warrior Blair, the shape-shifter Larkin and Larkin's scholar cousin Moira the Queen, all plot and strategize as the final day approaches when the humans must meet the vampires in a final battle that will either save or destroy the rest of the world. Posts are set up by both the people of Geall and the Vampires. Both the humans and the vampires use dirty tricks to sabotage the other's posts and kill each other. Moira, frustrated with her feelings for the vampire Cian, decides to break the tradition of men pursuing women and goes after him. Cian is shocked to find himself the prey to the scholarly queen as well as his own unwanted feelings. What follows between these two is fun, sensual and poignant. We also learn through what Moira tells Cian, details of her mother's death by the vampires which resulted in Moira being traumatized with feelings of guilt and sorrow. With all that goes on in this book, the story line is mainly character driven. Thumbs up to the author for giving us details like the beginning of Lilith's creation as well as how and why Lilith changed Davey and decided to keep him as her child. And most important of all we learn about Cian, my most favorite vampire of all vampire heroes. Unlike most vampires heroes, Roberts does not sugar coat him. She shows us the monster part of him, that craves to drink human blood, loves to hunt and kill. He chooses not drink from human, not out of a moral choice, but he considers it rude to eat from people one socializes and does business with. But later on, when the desolate barren place called the Valley of Silence calls to the evil in him, Cian does make the moral choice of not giving in to it. This is the a good example of the underlying message of this book: That through courage, honor and love, it is the choices we make that shapes our destiny. Overall a very satisfying read.
Copyright © 2020 Thriftbooks.com Terms of Use | Privacy Policy | Do Not Sell My Personal Information | Accessibility Statement
ThriftBooks® and the ThriftBooks® logo are registered trademarks of Thrift Books Global, LLC