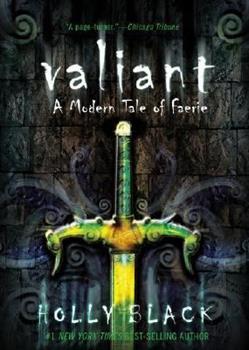 A companion novel to Tithe, from bestselling author Holly Black When seventeen-year-old Valerie runs away to New York City, she's trying to escape a life that has utterly betrayed her. Sporting a new identity, she takes up with a gang of squatters who live in the city's labyrinthine subway system. But there's something eerily beguiling about Val's new friends. And when one talks Val into tracking down the lair of a mysterious creature with whom they...

Welcome back to Teenlit, Holly Black!

Published by Thriftbooks.com User , 17 years ago
While I enjoyed the Spiderwick books, I was dying for Holly Black to return to writing for teens as she did in TITHE. I'm not a faery fan, but I loved what she did with TITHE, and I wanted to see if she would create more edgy, dark faery characters and settings. She is still Queen of the Shocker Opening: Val catches her boyfriend making it with her mom. Val's flight to New York after this results in her meeting with street teens who live in the tunnels under Grand Central. With them she comes to see the faerie world, not the Disney sugar-coated one, but the perilous one where humans can be used up and spat out, where the inhabitants are beautiful and deadly. Her new friends introduce her to Ravus, the troll pharmacist who brews potions, including the drug Never. It makes it possible for the faery people to live in our world without slow poisoning from exposure to iron, but it makes humans feel, and act, like the faeries. They can even do magic. But there are problems. Never is addictive. Val, who earns Ravus's trust as they talk and she serves as a runner for his drugs to his faerie customers, becomes addicted and steals from him. And his customers are getting murdered. Ravus, with whom Val is falling in love, is the prime suspect, and the faerie court that exiled him and his customers to our world is coming to deal with the murders and with him. This is a powerful book. It's about betrayal, homelessness, addiction and its poisonous effects on relationships and lifestyles, love, appearances, and hate. It's about making decisions and living with them. It's about choices. It's pure Holly Black, dark and wonderful and beautiful. No, it's not TITHE, and that's good. If I want to read TITHE, I have it on my shelf. And while I didn't set out to read about addicted kids, she says a lot of powerful things about how people get addicted to something, anything, without realizing that they're getting addicted. It doesn't have to be a substance--it can be a person, or a way of life. I'd like to know that, so when I feel like Val does in VALIANT, I'll know I'm drifting into an addictive mindset. As always, I love it when a girl learns how to *be* Valiant.

Published by Thriftbooks.com User , 17 years ago
I stumbled across Tithe in the YA section while looking for a gift for my sister. I never gave it to her. I stumbled across Valiant in a similar way and bought it for myself immediately. Holly Black is an amazing writer. Her words paint this world so vividly, it's incredible. I read that MTV is turning Valiant into a movie. I can't wait. I just hope they can do the book justice.

Published by Thriftbooks.com User , 17 years ago
i read this book straight through. i couldn't put it down. i liked it, dare i say, even better then tithe. it had just the perfect mix of the real world and the faerie world. it was amazing. when val leaves home and becomes a part of a whole nother world the consequences are extrdinary. and the fight throughout to figure exactly who is at the bottom of it is always there. i found that it had the perfect combination of:mystery/romance/gothic faerie tale/modern faerie tale. it was amazing, a read i would recommend to all who love the world of faeries.

Published by Thriftbooks.com User , 17 years ago
I met Ms. Black at a conference in NJ in March, and bought Tithe, which I enjoyed quite a bit. When I read that her new book was out, I ordered it fairly quickly, even though I'm a good 30 years older than her reading demographic. I wasn't disappointed. Knowing not to expect a direct sequel to Tithe, I took the story on its own merits. Part romance, part teen angst, part murder mystery, and all faery tale, Valiant moves surely from its initial startling Mcguffin, through an escalating series of events, to a clean and decidedly romantic conclusion. While I enjoyed Tithe, and understand why some people might prefer it, I found Valiant a crisper, cleaner read, its story more satisfying to my tastes, its characters more developed. People (and faeries) aren't who they seem to be, and Black handles the unfolding of the plot and the protagonist's journey and growth deftly, with a wealth of detail and heart. She pulls no punches, allows her characters flaws as well as virtues, and develops the story in a suprisingly realistic fashion, given the basis of the world she's created. An excellent read, and highly recommended.

Published by Thriftbooks.com User , 17 years ago
This isn't the kind of book that a synopsis suits -- if I'd come to it with no knowledge of Black's skill and had read that the book was about a runaway human girl who takes fairy drugs, I'd have assumed the worst and moved on. But Valiant isn't really about those things. It's about obeying the insane suggestion to go go go that your lizard brain whispers when you're standing at a train station or an airport. It's about the rusty, dirty magic of New York wrapped around a girl with a broken heart. It's about following those beautiful people down the alley at 4am instead of finishing your watery coffee and catching the morning train home. So I suppose she had me at St. Mark's Place, but there's more here than the trimmings; the story's bones are strong and important. This is the way a schoolgirl becomes troll defender, knight and protector, Valiant -- so hide your daughters, Missouri. This is a story that bangs out space for the girls who can't help standing up to bullies, and does so without even a whiff of the after-school special. The same feel for the surreal within the ordinary that made Tithe, which is set in the same world, so successful is even more apparent in Valiant. The exiled fairies scattered across Manhattan are no stranger than the perceptual disconnect between the normal adults strolling through Greenwich Village and the homeless kids they step around without seeing. Black's monsters can be brutal and deadly, but no more than the heroine's own friends and family. Well done.
Trustpilot
Copyright © 2022 Thriftbooks.com Terms of Use | Privacy Policy | Do Not Sell or Share My Personal Information | Accessibility Statement
ThriftBooks® and the ThriftBooks® logo are registered trademarks of Thrift Books Global, LLC