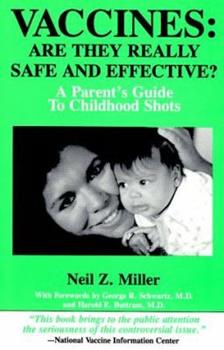 Vaccines: Are They Really Safe and Effective?: A Parent's Guide to Childhood Shots

Can mandatory vaccines trigger developmental disorders and autoimmune diseases? Are the responsible for an unprecedented rise in criminal activity and violent crime? Did AIDS originate from diseased momkey organs used to incubate polio vaccines? Are new viruses tested on unsuspecting vaccine recipients? How safe is your child from the near and long-tern effects of these miracle shots? Are vaccines really safe and effective? Read what the Ferderal...

Packed with information and references

Published by Thriftbooks.com User , 17 years ago
I don't normally write reviews, but after reading the review listed first written by Evan K. Yeung, I had to correct a horrible injustice. Evan K. Yeung would have you believe that the author is trying to sway the reader against all vaccinations and do so based only on the author's opinion. This small book is filled with over 900 references that you can easily check for yourself. If you have a problem with the information given on polio, you can look up any of the dozens of references on that one subject. In fact, the last few pages of the book are devoted to trying to convince the reader to do just that... look up the information for themselves. I find it interesting that Evan K. Yeung would accuse the author of having an agenda when there is nothing more than the sale of books to be had from such an agenda, while the good doctor could potentially lose thousands of dollars if his patients start deciding to think for themselves and begin to avoid some or all vaccinations. In my experience, Evan K. Yeung's reaction to this book is common among pediatricians, and medical professionals in general. Heaven forbid that a lay-person should question the medical status quo. Evan K. Yeung gives the book the lowest star rating and dismisses the book as one sided and ill-informed, then neglects to touch on some of the points in the book that are practically without question. For example, there is no good reason to administer a chicken pox vaccination. Chicken pox is a non-life threatening disease (deaths almost always occur from chicken pox when the person contracting them is already deathly ill.) Furthermore, children are far less likely to suffer serious symptoms than adults. The chicken pox vaccine does NOT grant life-time immunity, as contracting the disease itself does. Rather, the vaccine only delays contraction for 10 to 20 years... making the victim older and more likely to suffer serious ill effects if chicken pox is contracted. Sure you can keep getting vaccinated, but there is a slight risk associated with each vaccine a person receives. Wouldn't it be better just to get chicken pox as a child and be done with it for the rest of your life? What about Hepatitis B? Hospitals want to give your baby the Hep B vaccine before your baby goes home. What are the main ways of contracting Hep B? Drug needles and sexual promiscuity. Knowing that, does it really make sense to subject your one day old to the contents of a Hep B vaccine? It's points like this that let you know that Evan K. Yeung is really the one with the agenda. If he were writing a fair and balanced review, he would have mentioned these facts and acknowledged that the book has, at the very least, some valuable information. The bottom line is, even if you don't agree with everything in the book, you are given ample opportunity to research the sources from which the information came. I've read several books and web sites on this subject and this is the one I always return

Great book on the untold Truth

Published by Thriftbooks.com User , 17 years ago
I love ths book because the author started out as a concerned parent about to have kids. So he went out to do research to find out what would be best for his kids regarding vaccines. The conlclusions he came up with now make him one of the biggest proponents against vaccines. He is not anit-medicine, or anti drugs (like me). He is a parent who wanted the best for his kids. He shows you facts like most vaccines contain, mercury, formaldahyde and aluminum just to name a few. These chemicals and toxins are in there for the sole purpose of making the vaccine shelf life longer so not as much of the drug companies profits are eaten up by "spoiled" vaccines. This book shows anyone who is willing to look at the facts (he sites all the articles, journals and exact location to find the hundreds of references he uses) how vaccines are causing more damage than good. Many people think vaccines got rid of polio, measles and all the other diseases we have vaccines for. Using the National Institues of Health data the author shows you how this probably is not the case. If you graph the number of people who had a disease against time you would get a bell curve graph for all diseases we have vaccines for. The interesting part of this graph is the date the vaccines were introduced for those diseases. One would think they were introduced near the top of the bell curve. When in fact ALL of the vaccines were introduced at least half way down the bell curve, and most when the disease was almost gone by itself. By the time the vaccines were gone, the disease had already run it's course. The interesting part is also that past disease like most plagues that never had vaccines invented, has the exact same graph as those that have vaccines. The list goes on and on and the author will help show you how if you truly want your kid to be healthy, vaccines will not do that. In fact, exactly the opposite will happen. You might be thinking, but my kid won't be able to go to school. Or I cannot travel abroad. Yes you can. There are ways to easily have your kid go to school and travel with out being vaccinated. Most people just do not tell you about them. If you want to know for youself and feel confident in your decision Not to vaccinate your kid this book will help. There is also a website 909shot . com. It is the National Vaccine Information Center that gives all sorts great resources as well. And if you want a great book that will really give your child total health, The Creator's Manual for Your Body is a great book to do exactly that.

I've read 6 books on the subject. This was the best.

Published by Thriftbooks.com User , 20 years ago
This is the only book I've found that was not written by a doctor. Amazingly, it seems to me to be the best information I've found.Pro-vaccine books don't seem to make a very strong case for getting the shots. They tend to cling to the declining disease rates as the primary evidence of effectiveness. Neil Miller's two books debunk this argument rather well. Pro-vaccine books also focus more on the diseases as they existed during the height of their epidemics, rather than the reality today. They tend to gloss over (or ignore!) adverse side effects, both in frequency and severity.The doctor written books against vaccines take a sort of willy nilly approach to this highly political and emotionally charged subject. One said avoid the MMR, but get the DPT. Another said avoid DPT but get the MMR. In all cases, when they recommended a particular shot they glossed over specifics of safety and effectiveness, and instead focused on the dangers of the underlying diseases. But Neil Miller clearly explains what the dangers of these diseases vs. the dangers of the vaccines for each disease. He also clearly argues against the effectiveness of vaccinations generally, and the surpising lack of science behind vaccines. He also touches on how the corporations that make money from them have manipulated public opinion and the government, and how the statistics have been manipulated to under report adverse effects of vaccines.His books are excellent. I would recommend them to everyone, both for and against shots. Get as many books as you can find would also be my suggestion. Read and think for yourself.FYI, it wasn't very hard for us to find several doctors that would support our decision not to vaccinate. One doctor only gave the shots to kids when parents insisted on them.

Published by Thriftbooks.com User , 22 years ago
I heard this author on the radio and was impressed with his knowledge of vaccine statistics. He is very convincing. I bought his book and could not put it down until I read every page. The information made me mad and it made me cry. I had read other books on immunizations but none of them affected me so deeply. This book is guaranteed to make you tremble, but it is supported with hundreds of studies. I checked some of the more important references and was pleased to discover that this book provided an accurate summary of the data. I strongly recommend this book and have already purchased more copies to give to my family and friends.

Must read for any parent!

Published by Thriftbooks.com User , 23 years ago
The case against vaccinations is presented in this book with clear and logical examples. After reading it, I was able to discern what a hard sell the medical establishment does on vaccinations. I was already sold on avoiding vaccinations when the only thing the pro-vaccination sites could do is insist that it was the right thing to do, use scare tactics about what will happen if you don't and the schedule for getting vaccinations (which is totally illogical if you take some time to think about it). This books shows me that the aforementioned tools are the only things the medical establishment can say in "favor" of vaccinating your child. I am indebted to Mr. Miller for making this information available to the public in such a concise and readable book.
Trustpilot
Copyright © 2022 Thriftbooks.com Terms of Use | Privacy Policy | Do Not Sell or Share My Personal Information | Accessibility Statement
ThriftBooks® and the ThriftBooks® logo are registered trademarks of Thrift Books Global, LLC