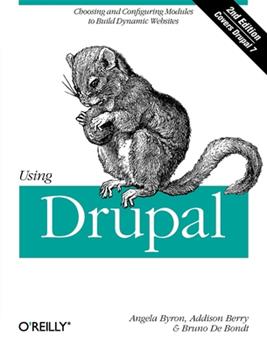 Take advantage of Drupal's vast collection of community-contributed modules and discover how they make this web framework unique and valuable. With this guide, you'll learn how to combine modules in interesting ways (with minimal code-wrangling) to develop several community-driven websites-- including a job posting board, photo gallery, online store, product review database, and event calendar. The second edition focuses on Drupal 7, the latest version...

Perfect solution, you must have a book for Drupal 6

Published by Thriftbooks.com User , 13 years ago
After a year of struggling through and figuring out how to use Drupal 5 -- and tentatively experimenting with Drupal 6, only to throw in the towel -- this book came to my rescue. If you're not a hardcore programming geek, it is insane to use the Drupal content management system without a good reference manual or two. Tiny problems that have relatively easy solutions can swallow days and weeks of your time. Finding answers on the Drupal website is hit or miss, its forum is generally helpful, but occasionally rude to overwhelmed newcomers. To be clear, a simple out-of-the-box Drupal website isn't necessarily that hard to put up. But as you try to fine tune the graphic layout, add functions, and expand the breadth of your site, you get a geometric increase in complexity. Of the Drupal books I've read, this has been the best. It walks through sample websites examining a wide range of Drupal 6 functionality, explains the CMS clearly and frankly, reminds you to follow best practices, and removes much of the system's mystery. I didn't see anything in this book that would be overly complicated for a newcomer with limited web development skills, but knowing a bit of HTML, PHP, and Javascript is immensely helpful.

This is the Drupal book I've been waiting for

Published by Thriftbooks.com User , 13 years ago
Drupal is an incredibly powerful CMS and like anything with its flexibility, Drupal quickly gets complicated. As much as I like the system, one of the problems that I've had with it is that Drupal has been built upon a unique set of assumptions/principles, which really haven't been covered in a book. Until now. This is the missing link between the introductory Building Powerful and Robust Websites with Drupal 6: Build your own professional blog, forum, portal or community website with Drupal 6, which does a nice job of getting a basic Drupal site set up but doesn't really show how to deeply customize the CMS, and Pro Drupal Development, Second Edition (Beginning from Novice to Professional), which is written for programmers. Both are good for what they are, but don't help the reasonably knowledgeable web designer, not programmer, wring all the juicy goodness out of Drupal. Through a series of well chosen example projects, Using Drupal, opens the door to the power and extensibility of Drupal and shows us not just how to do things but why. It's the why part that makes this book special. Drupal is different and understanding the philosophy behind the difference and how to think the Drupal way makes Drupal special. Even though I've built a dozen working Drupal sites over the last few years, a couple pretty complex and customized, I've felt that there was more I could be getting from the system. Oh, I can theme a site and set up users and modules. I could add custom forms and views, which my clients thought was great, but I always felt that here was something I wasn't quite grasping. No longer. Besides getting a ton of practical advice from well chosen and explained examples, Using Drupal has given me the key to thinking understanding the system. Brilliant. The authors could only cover a few of the many, many possible modules that extend Drupal. The ones they did cover are really useful, though, and form the core of most customization. What's great, if I may repeat myself, is that they way these add-ons are used and described teach Drupal principles, making this more than a cookbook. The single best source of Drupal information on the web is the site lullabot.com. It comes as no surprise that the authors of this book are the development team that puts out Lullabot.

A welcome edition to the Drupal library

Published by Thriftbooks.com User , 13 years ago
This book walks you though the basic setup of an amazing variety of websites using existing contributed modules. In every chapter I found my self saying "WOW! That's cool!". My mind was opened to new possibilities. Just check out the table of contents and you'll see what I mean: a photo gallery, a wiki, a newspaper with editorial workflow, an e-commerce site... Wow! Drupal is really amazing in the possibilities made possible by the contributors. "Using Drupal" will help you see what's possible and help you get started. At the end of each chapter is a "Taking it Further" section that makes recommendations for other modules that would improve the site you just created, which I found very informative even though they did not cover the details. Using Drupal is centered around Drupal 6, and makes extensive use of the CCK Content and Views (version 2) modules. CCK/Views are a very powerful way to develop web content types, and create different ways of viewing or referencing that content. The several sample websites that make use of CCK and Views will give you a good idea of how they work, and what is possible. The book does have it's flaws, and at times it's a little rough. Not inexcusably so, but be prepared for a few moments when what is supposed to happen when following the examples does not happen. There is a significant bug in the core Drupal modules that will present itself in Chapter 6 if you follow the "Hands-on" text, and the authors fail to make note of it, which left this reader wondering what he did wrong. There are also many occasions when the authors walk you through setting up some modules without adequately explaining the "why" of what you're doing. The target audience is decidedly not for the developer type. Knowledge of PHP scripting, CSS, HTML, etc. is certainly not required. In fact, a complete novice to the world of web development can probably follow most of the setup of the sample websites without too much trouble, if they have a bit of help in actually installing the files and setting up a database. This in itself is a testament to the power of Drupal. That's not to say developers cannot benefit. This can actually be a good thing for developers who tend to just go off and solve problems themselves. Better to get a lay of the land and see what other developers have contributed and see if you can use it. Odds are remarkably good that you can, and if it's just not quite there yet, you may find yourself wanting to get involved in the open source community to make it happen. Playing around with contributed modules is likely to help you see what's possible, and help you "grok" the Drupal way of doing things. Actually, I wish I'd read this book before "Pro Drupal Development" from Apress, but it was not available at the time. Overall, this is a wonderful and welcome addition to the material available for aspiring Drupal developers. I will no doubt be preordering the 2nd edition just like I did the 1st

This should be everyone's second Drupal book

Published by Thriftbooks.com User , 13 years ago
I'm just learning Drupal and this book has been invaluable. Via a "case study" approach, Using Drupal shows you many well-trodden paths through the Drupal forest using off-the-shelf modules to build out 9 sites. As a Drupal newcomer comfortable writing code (like me), your first instinct will probably be to start adding PHP to your theme, your blocks, etc. to do what you want. Using Drupal shows you how other developers have solved many common problems/features and packaged up the solutions as modules. It's like being able to start out on your first solo project after being on a team that has already completed 9 Drupal projects. You'll already have a set of "tried and true" design patterns to leverage and know how Drupal sites tend to be built. Using Drupal can only cover a handful of the numerous Drupal modules out there, but it saves you time by pointing out some of the most useful and commonly-used modules and showing you how to use them in practical situations. This book is not a comprehensive introduction to the basics (how to install Drupal, basic configuration, etc.), but once you have the basics and want to start "Using Drupal" on real projects, this should be your next read.
Trustpilot
Copyright © 2022 Thriftbooks.com Terms of Use | Privacy Policy | Do Not Sell My Personal Information | Accessibility Statement
ThriftBooks® and the ThriftBooks® logo are registered trademarks of Thrift Books Global, LLC