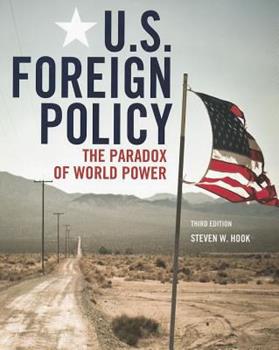 The United States still faces no credible rival to challenge its supremacy, even after years of economic crisis and war. And yet, the very sources that give rise to its primacy - exceptionalism, the diffusion of power, and the involvement of civil society in the foreign policy process - also create vulnerabilities. The new third edition of U.S. Foreign Policy provides students with a concise and accessible overview of this foreign policy paradox,...

Is the paradox of power unidimensional?

Published by Thriftbooks.com User , 13 years ago
Steven Hook's well written book on the US foreign policy is purposeful and incisive. He has dwelt on the historical perspective in a skillful manner while astutely pointing to the contemporary problems engulfing that country, at the same time. He is right in affirming that increasing openness and democratization on a global scale has injected diverse views and varied interests of so many nations that cross those of the United States. As a result, United States' policy makers are ever on the hunt for that elusive answer that would knit every other nation to Americanization. Instead, America is beset with near insurmountable problems at home and abraod. In fact, the United States is running short of ideas and seem to have been approaching a dead end since most of the available options has been exhausted. My book, "Tracing the Eagle's Orbit", provides a concrete answer as to how the problems posed by Dr. Hook can be solved, with a particular reference and anlyses to a chapter on Politics of Domination. Dr. Hook's book is very interesting and the readers would be glad to read it from start to finish. Gautam Maitra Author of 'Tracing the Eagle's Orbit: Illuminating Insights into Major US Foreign Policies Since Independence.'

Published by Thriftbooks.com User , 15 years ago
This detailed and enlightening overview of the U.S. power and hegemony in the modern world is supported by strong historical analysis and a list of the key problems facing the nation today. Professor Steven W. Hook outlines three major threats to U.S. Primacy, the first being cycles in the balance of power, concerns over economic globalization and the immediate threat of international terrorism (asymmetric warfare). Beginning with a historical overview, the American notion of "isolationism" is challenged by the westward expansion and influence in the Americas. Furthermore, we are given a fresh perspective on the Cold War and theories of International Relations. Professor Hook approaches this study largely from a liberalist perspective and stresses the importance of understanding the multiple facets within the "black box" of foreign policymaking. The complexity of this process is illustrated by the numerous actors involved in webs of issues networks and organizations representing a myriad of interests. Steven Hook's writing is consistently interesting from topic to topic and the issues well developed and strategically organized, which discourages fragmented or selective reading of just one chapter. I would encourage this for a collegiate or AP audience with knowledge of basic American Government and political process. Reading, however, is not excessively jargonistic and is presented logically with the terminology explained. I would recommend this to anybody inquisitive who wishes to learn more about America's important place in the world today.
Copyright © 2022 Thriftbooks.com Terms of Use | Privacy Policy | Do Not Sell My Personal Information | Accessibility Statement
ThriftBooks® and the ThriftBooks® logo are registered trademarks of Thrift Books Global, LLC