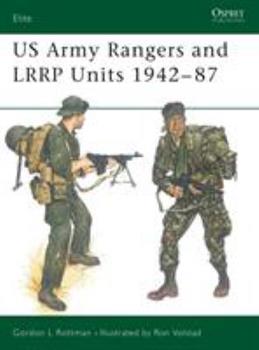 (Book #13 in the Osprey Elite Series)

Ranger - the very word conjures up visions of small, highly trained units executing lightning-fast raids on an unexpecting enemy. It is also synonymous with high esprit de corps and excellence at arms. The US Army Rangers provide units of well-disciplined soldiers who possess the knowledge and courage to operate on their own, deep behind enemy lines. Gordon L. Rottman explores the history of these unique troops, starting with the original 'Rogers'...

Published by Thriftbooks.com User , 16 years ago
An excellent about the very complex story of the US Army Ranger and Long Range Recon Patrol units. Coupled with some outstanding illustration this is a good deal for those who are interested.

Published by Thriftbooks.com User , 23 years ago
As a member of one of the units covered in this book by Gordon Rottman, I can say that the attention to detail is flawless and well researched. The artwork by Ron Volstad is impeccable - from the color of uniforms and equipment down to the handles on smoke grenades, nothing is in error. Having served with Sergeant Major Rottman (aka 'Gordo'), I can say that he is nothing if not thorough. His no-nonsense approach to all details is in keeping with the highest traditions of Army Special Operations.SSG Al Lorentz

Excellent, a must for those interested in Ranger and LRRP.

Published by Thriftbooks.com User , 23 years ago
A more compact, its is 64 pages, well written and illustrated book on the Ranger and Long Range Reconnaissance Patrol (LRRP) units of the period will be hard to find. According to the author information, Gordon Rottman was a Special Forces weapons specialist in the 5th SF Group in Vietnam in 1969-1970. At the time of publication in 1987, he was a civilian contract Special Operations Intelligence Specialist at the Army Joint Readiness Center, Fort Chaffee, AK and, as a Reserve MSG, the Operations Sergeant of the Opposing Forces Group of the 75th Maneuver Area Command. Ron Volstad did the illustrations and, not to take anything away from the text, the illustrations alone are worth the price of the book. The book contains 10 pages of full color plates with 55 artist renderings depicting uniforms and equipment of Ranger and LRRP units of all eras from 1942 to 1987. The artist is very faithful in his capturing of the uniforms worn, including insignia, and the equipment carried by particular individuals. The artists illustrations are described in the last section of the book. Each picture has the specific items of clothing and equipment identified including the year of introduction of the item and its supply system designation (e.g. "M1 rifle with M7A1 grenade launcher and M15 grenade sight"). In addition to the artist pictures, the book includes numerous photographs of the Ranger and LRRP units and individuals from the years covered. The section on the Korean War period is not as complete as it could be. However, the author did not have Bob Black's book "Rangers in Korea" (published in 1989) for reference. As it is, the book covers the Korean War period in about four pages and is a good summary. The author begins by relating the problems of Ranger organizations in all the eras covered in the book. "Their missions and capabilities have often been misunderstood, and their personnel misused. Ranger organization and missions have changed with each war, which has led to an additional problem - lack of continuity between the wars." The author also illuminates the difference between Ranger-type organizations and LRRP units. Ranger-type units are intended for direct action missions against the enemy such as raids and ambushes. LRRP is used as a generic term to describe units tasked with passive deep penetration reconnaissance and surveillance missions. I am very impressed by the book and recommend it to anyone that wishes to get a concise look at Ranger and LRRP units and a brief summary of their history from 1942 to 1987. Ranger Walt Eckhardt, President, Ranger Infantry Companies (Airborne) of the Korean War (RICA)
Copyright © 2020 Thriftbooks.com Terms of Use | Privacy Policy | Do Not Sell My Personal Information | Accessibility Statement
ThriftBooks® and the ThriftBooks® logo are registered trademarks of Thrift Books Global, LLC