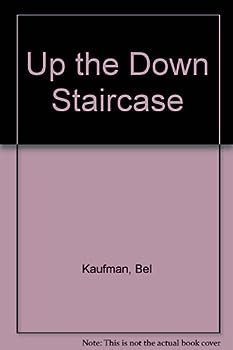 Up the Down Staircase

In its 47 printings, Up the Down Staircase has sold more than 6 million copies, has been translated into 16 languages, and made into a prize-winning motion picture. This funny and touching story of a committed, idealistic high school teacher is now availble in trade paperback, with a new introduction by the author.

Kids are still the same

Published by Thriftbooks.com User , 16 years ago
I first read this book back in the 1960s before I entered the teaching profession. I have read it several times since. Having just retired from teaching after 34 years, I can say that kids are still basically the same as described in this book. They may have laptop computers now, but their personalities are the same. We still have the teacher pleasers, the lovesick girls, the politicians, the misfits, the loners, and all the rest. My mind has gone back to this book many times as I encountered situations similar to those that faced Miss Barrett. As a matter of fact, as English Department chairman, I often quoted her boss, Mr. Bester: Let it be a challenge to you. I recommend this book to all who would venture into the exciting and wonderful world of the school teacher.

Published by Thriftbooks.com User , 17 years ago
Schoolteachers make up a pretty small percentage of the population, but "Up the Down Staircase" gives us a little glimpse of exactly what it is like to be one. Especially an idealistic-to-a-fault one who has to deal with a... well, shall we say, interesting group of students. (That is to say, more than a little insane)Miss Barrett arrives at Calvin Coolidge High, to teach English to a motley band of students. Among them are: Hormone-addled Linda; resentful, angry Joe Ferone; woman-hating Rusty (who repeatedly tells Barrett that he would like her if she weren't "a female"); Edward Williams Esq., who thinks that everything is racially-prejudiced; soppily romantic Alice, and a slew of others. Miss Barrett realizes over time that the kids are screaming out not just for education, but for love and understanding. But will her idealism break through to them?This isn't really a novel as people generally think of it -- it's composed of skits, letters, notes, and occasionally stretches of dialogue between the teachers and students. Sounds awful? It isn't. Instead it's cute and quirky, and if you get past the odd format it will become immensely enjoyable and coherent. The dialogue is funny, especially since quite a few of the students don't spell-check. ("Fuk"?) There are also suggestion box excerpts ("You think it's fair when a teacher takes off 5 points on a test just because I misspelled his name wrong?"; "We're behind you 85%!") and book reports ("We study myths to learn what it was like to live in the golden age with all the killings"; "We read it because it's a classicle"). One chapter is even devoted to the extremely imaginative lies that the students think up to explain what happened to their homework ("Some one stole it") with a bit of honesty as well ("I didn't know we were supposed to do it").There are more serious moments, such as one young woman dying after a botched abortion, and a lovelorn girl jumping out of a window because her crush read one of her love letters. And Barrett's disillusionment near the end is as saddening as the response of the students is uplifting. It's also rather pleasant to read that a teacher with genuinely good intentions and hopes can make a positive difference, even though it lacks in realism. The peculiar narrative drags a bit during the first fourth, but picks up after that with more about the students and less chitchat between teachers."Up the Down Staircase" is touching and funny, a novel in the barest sense but immensely enjoyable. It's a little weird and drags at times, but it's still fun. And if you're a teacher, you'll probably be weeping at the traumatic memories it brings back.

Published by Thriftbooks.com User , 18 years ago
I am a teacher -- elementary -- and I identified with this book thoroughly. I realize that it was written almost 40 years ago, but it still shows how teachers can be caught up in paperwork, meetings and beaureaucratic folderol and not have time to do what they were hired to do . . . namely, TEACH!Again our nation faces a teacher shortage. If we would treat the teachers we already have like professionals -- in fact, like human beings -- we might find more people interested in going into the profession.

Published by Thriftbooks.com User , 20 years ago
I have to admit that when I first read this book, I didn't think it would be that good - especially considering the awkward structure of the novel. The story is told through a series of notes and letters which is a big shift from any "standard" novel I have read before (aside from "Dracula" - which becomes "standard" later on). Even so, after a few chapters to adjust to the new style I quickly found myself deeply involved with the characters and the plot. At times I was so moved or laughed so much that I just had to stop reading and reflect for a while. I found myself both rooting for my fellow students and backing the teacher.Bel Kaufman does a great job of characterization of the heroine and uses the letters effectively to sway the reader but leaves some intentional gaps for the reader to dwell on and figure out on his own. (What a great concept!) All in all, this book was great! It took me back to the good old days when I was in high school and made me understand what it is like to be a teacher at the same time.

The Best Antinovel I've Ever Read

Published by Thriftbooks.com User , 20 years ago
Don't be put off by my title. An antinovel is merely a book that rejects the traditional elements of a novel. In "Up the Down Staircase", the story is told through letters, memos, notes left in suggestion boxes, and scribblings in notebooks. Some people may consider the letters the clumsiest part of the novel, as they are too detailed and precise to have been written directly from the protagonist's memory (as they are supposed to have been). That is not the point, however, as this clumsiness is something you only notice after you've finished reading (hopefully), assuming that you're really into the story.Like all other books about teachers-who-touch-the-lives-of-students, this novel is touching, poignant and funny--and properly depressing at the right times. It is also full of the strangest characters, teachers and students alike. Yet real life teachers will recognize their own students in the fictional ones and real life students will agree that the weird teachers in the novel are pretty realistic.What makes "Up the Down Staircase" different from others of its kind (e.g. "The Blackboard Jungle") is that even though it is "messagey", it was not written by someone who had an axe to grind. Yes, Bel Kaufman exposes the terrible working conditions and lack of respect public school teachers get, as well as the poor education students are subjected to--but Kaufman is no Dickens! (Thank goodness!) The crusade to help teachers and students is put in the background, where it belongs; and the story of Miss Barrett, her students, and the other colorful people of Calvin Coolidge, remains in the foreground.
Copyright © 2020 Thriftbooks.com Terms of Use | Privacy Policy | Do Not Sell My Personal Information | Accessibility Statement
ThriftBooks® and the ThriftBooks® logo are registered trademarks of Thrift Books Global, LLC