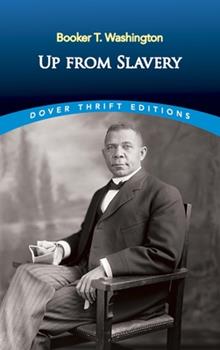 Born in a Virginia slave hut, Booker T. Washington (1856-1915) rose to become the most influential spokesman for African-Americans of his day. In this eloquently written book, he describes events in a remarkable life that began in bondage and culminated in worldwide recognition for his many accomplishments.

Published by Ieshia , 2 years ago
I liked the book very interesting

Published by Thriftbooks.com User , 11 years ago
I read this book with my 12 year old as part of a book club.I didn't know much about Booker T. Washington,and this book was very interesting.He was truly a remarkable man living in a time of extreme change for our country.I feel I now have a broader view of the post slavery South then I had,even growing up there.

Booker T. Lost, But Who Won?

Published by Thriftbooks.com User , 16 years ago
Over the years, being aware of the great rivalry between Booker T. Washington and W. E. B. Dubois I had grown used to Dubois followers saying Booker T. was an accommodationalist Uncle Tom, and other similar statements. I read Up from Slavery as a teenager, and I didn't get that impression from him at the time, so I usually dismissed people's negativity about him as misunderstanding. Having recently re-read the book, it made a far stronger impression on me as an adult and I feel compelled to give my own opinion, especially since the old "accommodationalist Uncle Tom" reviews are also on this site. The time period after the slaves were freed was known as Reconstruction. The former slaves were both scared as to what the future held and deeply excited to experience this concept of freedom with the fire and enthusiasm of the Newly Born. For the most part they were very ignorant of their past, of how to establish themselves as a thriving community, how to interact with their white neighbors in a way beneficial to all and how to best use their money and time to grow as individuals. The whites were equally scared as to what the future held (change is often scary) but they were also excited for the former slaves and 100% wished them well. Yes, this was also the time period that formed the KKK, but evil racists were always around and thankfully, then as now, are in the minority. As Booker T. explained, both the owner and the owned had been damaged by the chattel slavery institution. Because the lowest member of society was the slave to whom all menial labor was delegated to, both races saw work/labor as something to be avoided. The whites saw it as something that was beneath them, while the blacks felt they should rise up above it as free men. For them, "freedom" meant `I no longer have to work hard.' The blacks felt that if they could get an education they could "live by their wits" by teaching, being politicians, preaching or any other profession that required thinking for money, so that they would never have to perform physical work/labor with their hands again. They suffered from many misconceptions as to what made a free person successful, such as purchasing a very expensive item that they couldn't afford as a status symbol to show that they've "made it" even going into severe debt to have it. They felt that intensive study into Latin or Greek languages somehow made them superior to other people and that mastery in these fields also proved that they had "made it." Booker T. and Dubois created two models designed to help pull the race forward as a free and successful people. 1.) Booker T. Washington's model involved not only a solid education in academics and Qur'anic/Biblical principles (integrity, hard work and patient perseverance) but he also felt that each member of the race should be schooled in industry and the value of Sacred Work/Labor. As opposed to the work they were used to doing as a slave, Sacred Work was the necessary work

Published by Thriftbooks.com User , 18 years ago
In 1901, Booker T. Washington (1856-1915) published this autobiography. Born into slavery, after emancipation, Mr. Washington developed a philosophy that African-Americans needed to sweep away the ignorance that their subservient position had left them with, and earn the respect of the whites through hard work and excellence. In 1881 he founded the Tuskegee Institute to teach African-Americans how to study, how to work hard and intelligently (producing better results than the white businesses of the day), and how to have respect for themselves and others. This is Mr. Washington's story of his youth and his success at Tuskegee. This is a fascinating and uplifting book. Though cognizant of the racism that often surrounded him, Mr. Washington never lost his faith in the basic goodness of the people of all colors that he met. The only problem I had with this excellent book was the knowledge I could not shake, that Mr. Washington's faith was not rewarded, and the white community of the day would not give the African-American community respect and fair treatment. That said, though, this is a great and wonderful book, which should rightly be considered an American classic. If you want to read a book that is a window on the America of the late nineteenth century, or if you want an uplifting book about a man of faith and love, then I highly recommend that you get this book!

Not Just for African Americans

Published by Thriftbooks.com User , 19 years ago
What is most striking about Washington's autobiographical account of his rise from slavery to revered statesman is his lack of resentment toward white culture. Rather than focus on what whites should do to uplift blacks, Washington encouraged blacks to take individual agency over their lives. He believed the best way for blacks to achieve social parity was to become indispensable members of the communities in which they lived. His absolute confidence in black resilience would probably be regarded as naive in today's political discourse. And yet the long list of his (and all black culture's) achievements during this period are unmistakable and nothing short of inspiring.It's a shame this book is on the African American Studies shelf. The lessons from Washington's life apply to all humans, not just blacks. This book would be an excellent addition high school reading lists as a model of the values consonant with personal success.

The power of a positive thinker

Published by Thriftbooks.com User , 21 years ago
"Up from slavery" documents the rise of Booker T. Washington, from a plantation slave to the head of Tuskegee college in Alabama. Along the way his narrative details the squalor and humiliations of his childhood and ends with a number of journalistic adulations regarding his career and speeches. It is a wonderful book, yet curious. Unlike Frederick Douglass, the severe critic of the slaveholding South, Washington's outlook is decidedly postive. He refuses to get into any kind of individual or group bashing, but prefers to dwell on the successes of blacks, improving race relations, and the success of his school- and students. He becomes enamored of his own success on the stump, but such is the case with most ambitious, forward looking individuals. I would have liked a bit more criticism, and fewer excerpts from the newspapers of his time (regarding his speech-making ability.) His repeated refrains about service and merit (being the only true measure of a man), are sound. All in all, this is an upbeat, inspiring story from a man who truly defied the odds, and his winning attitude is sorely needed today.
Copyright © 2020 Thriftbooks.com Terms of Use | Privacy Policy | Do Not Sell My Personal Information | Accessibility Statement
ThriftBooks® and the ThriftBooks® logo are registered trademarks of Thrift Books Global, LLC