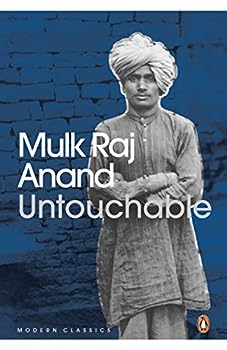 This description may be from another edition of this product. Mulk Raj Anand's extraordinarily powerful story of an Untouchable in India's caste system, with a new introduction by Ramachandra Guha, author of Gandhi Bakha is a proud and attractive young man, yet...

Published by Thriftbooks.com User , 12 years ago
This book was rather interesting as it gave insight into the life of a young man in pre-independence India and discussed many trials that the untouchable people may have experienced and may still experience in India.

Published by Thriftbooks.com User , 13 years ago
Mulk Raj Anand has contributed a timeless and poignant account of the plight of the untouchable of India. Although this is a novelization of untouchable life, it reads like real life. For those beginning their education about the untouchable outcasts of India, this book will give them an immediate, up-close and personal look into the hellish world that was untouchability. The lead character Bakha (a street sweeper) experiences the furious oppression and scorn of being a polluted untouchable, and at the end of the book witnesses the arrival of Mohandas Gandhi, who preached the abolition of untouchability, and wanted to uplift the "harijan", as he called them. Inspired by Gandhi, he hopes to lead a better life, and to escape a life of torment and squalor. This short book is a quick and engaging read for those who wish to have an inside look at what life was like for the untouchables.

Published by Thriftbooks.com User , 17 years ago
Untouchable, by Mulk Raj Anand, 1933We thought this was a valuable book because it was motivated by passionate political convictions to inform people about the plight of the `Untouchables' in Hindu society in the 1930s and was well written. We felt that, apart from the contrived ending, the novella worked very well in telling a believable story. We felt that Anand represented the main protagonist of the narrative - a young man called Bakha - as someone to identify with and feel for. He was not a `cardboard' hero but someone pitiable in his eagerness to please and his gratitude for the smallest crumbs of kindness from his superiors. Because there are no chapter headings the readers are drawn on and on to follow him in his path.The characterisation was considered to be vivid with the story being told in a succession of short `set pieces' entailing dramatic encounters with the friends and the enemies of the Untouchables. The novella covers just one day from sunrise to sunset in the life of the eighteen year old Bakha. It seems to be a day when he `comes to consciousness' in many ways as to his position at the bottom of the social and spiritual hierarchy. We learn that he is imprisoned by an invisible wall of prejudice so that he cannot walk in the streets freely, nor buy food, nor worship or even visit someone's house normally. Through following his sister briefly we learn that Untouchables are even unable to collect water for themselves but must beg others to obtain it for them. Nor is he allowed an education or medical care. Nevertheless Anand portrays him as capable of some happiness. Even in his restricted position he takes some pleasure in his clothes, enjoys part of his hard work and a game of hockey. Anand provided a contrived ending so as to offer the varied solutions to the problem of Untouchables as put forward by Ghandi, a Christian, a Muslim and a social reformer cum poet. Bakha is left at the end of the day only with the comfort of knowing that his situation has been noticed as something which needs to be addressed. We thought that it was very much of its time in the sense that Anand cannot conceive of getting Bakha to perform his own liberation. He must be freed by someone else: whether by radicalising Hindus, or becoming a Christian or a Muslim, or by being given flush toilets by western industrialists.We also felt that society in the UK had treated poorer classes which did dirty jobs - cleaning up after others often - in ways which had some parallels with the situation of Bakha.

Published by Thriftbooks.com User , 20 years ago
I do not remember why I first bought this book, but when I was reading it, it sure fired up some long gone memories into my system of the times when I was a six year old boy use to visit my grandparents in a remote village in Punjab, India.I have always heard of the Untouchables but did not remember how disrespectfully the Indians have been treating their own people known as the Untouchables.To summarize the book in some sentences -1 It is an excellent story, which may not be true, but 99.9% of the Untouchables and the rest in India will relate to it.2 The story also describes very clearly the Context in which these people have/had to work for their Masters (Jats, Brahmins etc.) in the villages of India.3 If you do not wish to do extensive research on this topic but you want to understand the meaning and get a handle on 'the Untouchablility' existing in India then this book is for you. 4 I have also read an excellent book by John D. Morley called "Pictures from the Water Trade" which describes how a very similar Caste system also flourishing in Japan. My point here is that India is not alone, guilty of subhuman practices. In India there exists, perhaps, a more established hierarchical Caste system structure than any other place, and you will get a clear picture of it after reading the book.

Published by Thriftbooks.com User , 21 years ago
Looking at the title some people might say: "Oh, well, it is another one of those stories about poor, suffering Indians...It is probably just another tearjerker, nothing more...and this and that..." They would be only half-right. Yes, it is another story about unimaginable suffering of out-cast Indians, The Untouchables. Yes, if you call yourself a HUMAN being and have a heart, you WILL empathize with them. However, this book doesn't ask you to pitty its characters and/or cry for them. Instead, it makes you think about them, not only in the context of Indian culture, but in a context of a much larger world. It also forces you to draw parallels to your own culture, whether you like it or not. Today, this book is especially potent, as we no longer live in our "little isolated cultures", separated by endless preconceptions and stupid prejudices about each other. In addition, this book is simply a piece of excellent writing, thanks to the wonderful writing skills and creative methods of its author. The story is narrated through the eyes of a main character, who directly addresses you as a reader, and yet sometimes seems to ignore you completely, while going about his own business (those are particularly interesting moments in the story). So, read this book, follow the lives (actually, try to live their lives with them) of its numerous and vivid characters, not one of whom is like the next one. I garantee that you will learn something new about India and also about yourselves, in the process of reading this book.
Copyright © 2020 Thriftbooks.com Terms of Use | Privacy Policy | Do Not Sell My Personal Information | Accessibility Statement
ThriftBooks® and the ThriftBooks® logo are registered trademarks of Thrift Books Global, LLC