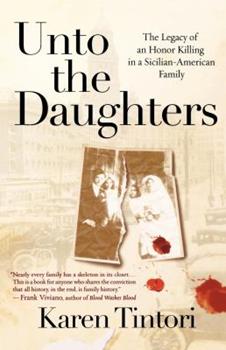 Unto the Daughters: The Legacy of an Honor Killing in a Sicilian-American Family

Karen Tintori thought she knew her family tree. Her grandmother Josie had emigrated from Sicily with her parents at the turn of the century. They settled in Detroit, and with Josie' s nine siblings, worked to create a home for themselves away from the poverty and servitude of the old country. Their descendants were proud Italian-Americans.But Josie had a sister nobody spoke of. Her name was Frances, and at age sixteen she fell in love with a young...

Published by Thriftbooks.com User , 4 years ago
Read the book twice, it is so interesting. Great read.

Published by Thriftbooks.com User , 13 years ago
As an Italian-American from the Detroit area, I read with interest, Unto the Daughters. Karen Tintori has managed to somehow take a dark, hidden piece of her family's history and breathe life into players that have since died. Tintori pulls no punches with the brutality in which women in general were treated in Sicily and early first generation American families. The secretive nature of the Sicilian culture resonates within Unto the Daughters. Hearing it had been compared to Godfather II, I had a difficult time visualizing how that could be, but once I started reading, the comparison is on point, especially the way Tintoi weaves her story between modern day Detroit and the Sicilian town of Corleone. Her great aunt, the heroin, becomes a real, living person, even though only one photo, a shred of the proof (along with a scratched-out passport) that she existed, is all that survived. Tintori's background as a journalist is present throughout, as she effortlessly supplies her descriptive storytelling with facts of Sicilian and early first-generation culture and geography throughout. A powerful, brave work whose pain, setting and tone is all too palpably real.

Published by Thriftbooks.com User , 14 years ago
I found this book to be fantastic. Not only was it extremely well written, but, it is so incredible to get such insight into a family history. After reading this book, I wanted to dig deep into my family history and see what kind of "secrets" I could find.

Published by Thriftbooks.com User , 14 years ago
Unto the Daughters was a great read. There was a great sense of understanding this family and how things happened. I was impressed with the great research into the lives of everyone! A Great Book Club book with tons of discussion.

Unto The Daughters- Karen Tintori

Published by Thriftbooks.com User , 14 years ago
Unto the Daughters: The Legacy of an Honor Killing in a Sicilian-American FamilyHi Everyone: For all the Italians and other ethnic backgrounds. Unto the Daughters Is a true story written by Karen Tintori. I enjoyed it very much and couldn't put it down until I was done. It is written with honesty, history, intrigue and traditions of Italians coming to America. A piece of history that is a must to know. Now, I know where all my family traditions come from. It was sad at times and the struggles were horendous. It makes you think never loose site of where you came from. It really makes a difference and forms who you are. Hold on to it from generation to generation. Never let it fade away and let something else replace it. After all the struggles they had and the devotion to ones family. You have to respect the hard work,sacrifices and the tragedy's that where made. Just to have a better life for their children here in America. It would make an excellant movie. Well, done Congratulations Karen Lots of Love: Cathy Alexander(NH)

Published by Thriftbooks.com User , 14 years ago
This is a terrific book! It was truly a page turner. While most people do not house this type of skeleton in their family closet, we all have family secrets. It is only through dogged determination that they are revealed to us. Unto the Daughters is a true eye-opener into the life and times of Italian immigrants, their customs, their beliefs, and sadly in some cases, their reactions to circumstances out of their control. What a blessing that Ms. Tintori took the time to research this erased but not forgotten woman, to put it on paper to share with us all.
Trustpilot
Copyright © 2022 Thriftbooks.com Terms of Use | Privacy Policy | Do Not Sell or Share My Personal Information | Accessibility Statement
ThriftBooks® and the ThriftBooks® logo are registered trademarks of Thrift Books Global, LLC