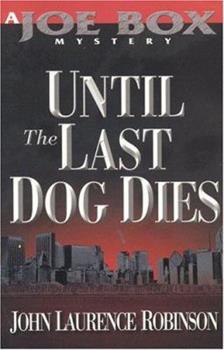 Until the Last Dog Dies: A Joe Box Mystery

Joe Box, a rough-hewn, wisecracking private eye is in for some big changes. He's just become a Christian, and not a moment too soon, either. Joe is facing the challenge of a lifetime. He's trying to track down and catch a seemingly inhuman killer, and this time it's gotten personal and - and -the shooter's after guys Joe served with in Vietnam.

Published by Thriftbooks.com User , 16 years ago
I don't usually read Christian fiction. Not because I'm an atheist or agnostic or any other "a" word that would make my Southern Baptist parents turn over in their graves, but because I like my fiction quite a bit more true-to-life than is usually allowed for by the unrealistic restrictions most Christian publishers place upon their authors. So I was thrilled to find that Joe Box--John Robinson's rough-edged detective in UNTIL THE LAST DOG DIES--is as real as... well, as Joe himself might say, as real as a slap upside the head from your mama when you're not paying attention. Joe is a multi-dimensional character who takes you with him just as deftly when he revisits 30-year-old memories of Vietnam as when you follow him breathlessly through the investigation into who is killing all his former platoon buddies. And for all Joe's lingering hard-nosed habits, ever-present and steadily growing is an inner peace and unmistakable contentment that come from Joe's still-new relationship with God that allows him to face the madman who wants to destroy all that Joe loves. Imperfect Christians are much better examples for non-believers than any holier-than-thou pontificator with nary a flaw, bad habit, or tarnished spot on his halo. Joe Box is a real Christian who is learning to live with his faith--warts and all. Readers of all kinds will both like him and identify with him, and I can't wait to join him in his next adventure.

Published by Thriftbooks.com User , 18 years ago
I am quickly becoming a fan of John Laurence Robinson. After reading his first book, Sock Monkey Blues, I couldn't wait to be captivated by another Joe Box mystery. I was not disappointed. UNTIL THE LAST DOG DIES is yet another treasure to be devoured by any mystery enthusiast. Mr. Robinson certainly has a gift for weaving interesting plots, creating larger than life characters, and blending reality with spirituality while maintaining a sense of humor. This is a smooth, fast paced read that never lets you down. The reader easily feels like part of each scene while maintaining a healthy distance, lurking in the dark shadows. There should be a reason to read a book. Mr. Robinson's hook is the human character he has created with Joe Box. Joe is the sarcastic, street-smart private eye that maintains his edge while showing a hint of his vulnerabilities. He is a loveable character indeed. Add the suspense and you have one outstanding read. Well done and highly recommended.

exhilarating - modernizes Christie's And Then There Was None

Published by Thriftbooks.com User , 18 years ago
In the middle of the night Cincinnati private investigator Joe Box receives call from a frantic Little Bit, who says someone is trying to kill the survivors of their Nam platoon. Joe is shocked to hear from a guy he had not spoken with in three decades while also trying to calm the guy down saying it is nonsense. Joe hangs up, but the next day Little Bit's wife calls saying he was electrocuted. Joe is stunned because he knew how afraid of electricity Little Bit was. Joe thinks that too much coincidence is involved as Little Bit had mentioned two other deaths in the last two weeks. With the help of librarian Mrs. Brake, he learns that three other members of his platoon of ten are also dead. As he flashbacks to his time in Nam, he wonders how to stop a killing machine who has made each death seem like suicide or accident before this invincible killer murders he or the other survivors. This is an exhilarating thriller that modernizes Christie's AND THEN THERE WAS NONE by using a Nam platoon as the victims thirty years after they completed their tour of duty. Joe is an intriguing private sleuth who has found strength in God which has given him a reason to live although he still mourns the loss of his beloved who died one year into their marriage years ago. His supportive girlfriend Angela Swain helps, but the tale belongs to the cat and mouse game and the insightful flashbacks to a search mission to kill Charlie the sniper. Harriet Klausner

Published by Thriftbooks.com User , 18 years ago
I was not privileged to read Mr. Robinson's first book, but I can tell you that "Until The Last Dog Dies" is one of a kind. We meet Joseph Box, a private investigator, but one whose past often troubles him. Joe has just become a Christian, new to benefits that a child of God has, Joe is very fortunate to have a special lady friend to help him. He's going to need it as a killer is on the loose, but this case is a little different than the rest, he is after Joe and all those that served with him in Vietnam. At first Joe does not put the pieces together, but soon it is obvious that this madman is slowly killing these men, and he is forced to recall memories he would sooner forget. The twist to this story is that somehow the killer knows each man's greatest fear and is managing to kill them in that way. Be it electrocution, drowning, or other ways, that is how they were dying. Creepy to say the least! You soon realize that this killer is pure evil and has the power of the devil on his side. Only God will be able to save Joe and the woman that he was beginning to love. The author weaves in many Christian beliefs, but he does this in such a subtle way that the reader is not smothered by it, but accepts it as part of the storyline. His writing is outstanding, as he builds the mystery around the colorful characters from Joe's past and present merging them into a top notch story. Good job! A well thought out work, brimming with layers of intrigue and heart pounding suspense. Magnificent conclusion that will leave you breathless.Highly recommended.Shirley Johnson

Published by Thriftbooks.com User , 18 years ago
About John Laurence Robinson's first book, I went out on a limb and said, "He writes in a fresh style, with a distinctive voice. He and Sock Monkey Blues are one of a kind." Well, now I must amend that statement. As writer, he is one of a kind and the second in his Joe Box series is equal to the first. Until the Last Dog Dies has that special something, which is a unique story well told by an excellent wordsmith. Joseph Jebstuart Box - Joe to his friends - is a true Kentucky gentleman with a somewhat dicey past. His job as private investigator in and around Cincinnati barely keeps food on the table and a roof over his head. Only a few months past a case that nearly killed him, Joe's life is a "train wreck", but he's beginning to see a light at the end of his tunnel. His rough life is behind him; he's begun a hopeful Christian walk; and the lonely widower has a new woman in his life. With wry, self-effacing humor and down home realism, Joe faces his future with hope. And then the members of his combat team from Vietnam begin to turn up dead. As Joe says, duty and honor are inextricably bound to Dixie's sons. He's duty bound to ferret out the killer of his combat brothers. As his investigation into each death progresses, a familiar evil horror is revealed. Robinson skillfully weaves vignettes from combat days in Vietnam with present day occurences as we learn who's killing veterans and why. Joe may be new to Christianity, but he knows only God's power can protect him from pure evil. He's in this battle until the last dog dies, and if that dog is him then so be it. Robinson is a masterful story teller. His characters are well-developed and charismatic, the suspense hair raising. Like the author, Joe Box has what it takes. He is a Christian and makes no bones about it. But he's a tough Christian who takes on evil with power and panache. The Joe Box series gets my highest recommendation.
Trustpilot
Copyright © 2022 Thriftbooks.com Terms of Use | Privacy Policy | Do Not Sell or Share My Personal Information | Accessibility Statement
ThriftBooks® and the ThriftBooks® logo are registered trademarks of Thrift Books Global, LLC