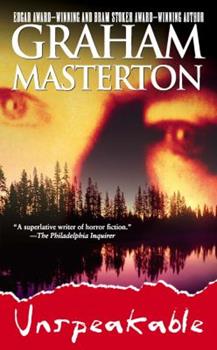 There are no words...Holly Summers is deaf, but she "hears" thanks to her immense talent for lip-reading. A child welfare officer, Holly moonlights for the Portland, Oregon, police, using her unique gift to aid in criminal investigations -- including one into the case of a recent string of women who have vanished without a trace.There is no sound...Witnessing unimaginable evil in the abuse cases she handles, Holly fights every day to salvage broken...

Masterton is the greatest!

Published by Thriftbooks.com User , 15 years ago
I am an avid Graham Masterton fan and I have read few authors that can invoke horror the way he does. Unspeakable is a hard book to describe without giving away important information that would ruin the reading experience. The book is not the usual supernatural, booga-booga horror that Masterton usually pens. This story rings somewhat true to life, which in a way, makes it even more horrific. Holly is a single mother who is deaf. She works for the child welfare system investigating alleged abuse. The cases she is investigating are horrific enough, but she has a curse placed on her by an american indian who she has arrested for beating his wife and son almost to death. Her life starts to fall apart almost immediately after the curse is muttered, and some pretty bizarre things start to happen. The ending is so completely twisted, you will find yourself sitting dazed, with your mouth hanging open. That is how it left me. Aside from the error others have written about, where Holly hears her daughter and Mickey laughing, when Holly is supposed to be deaf, this is a great book. It may not be perfect, but it packs a wallop in a short number of pages. Masterton still reigns as one of horrors greatest authors. This is a book worth reading.

A new twist from an old master(ton)

Published by Thriftbooks.com User , 15 years ago
Graham Masterton steps out of writing pure horror and instead tells a story about real-world horror: the child welfare system. What a nightmare? I'd rather read about vampires and evil monsters and be satisfied that they were fiction than have to face the truth that our own children are sometimes treated badly by humans who are worse than any monster. Understand, this story does have some spooky stuff, like a Native American curse, etc., but that takes a back seat to the real drama that he must have researched to make this book so powerful. Masterton never disappoints.

Master Work, in spite of

Published by Thriftbooks.com User , 16 years ago
the error on page 72 of the paperback book. Whilst it is an error, it is hardly what I would call a story killing error. Masterton has produced a vast array of books. That I am aware of, BONNIE WINTER, aka TRAUMA( the paperback version of BONNIE WINTER), is the only book stylistically similar to UNSPEAKABLE. The horror in UNSPEAKABLE is very toned down from what Masterton usually produces. It does have the very deft and detailed elements of everything he does, but it has at its core a curse, and this is clearly developed, in fact, it is inevitably developed. This book is a genuine pleasure to read, and despite the page 72 error, a forgiveable one, which can be easily fixed in later editions, it is a great story, and hopefully can be translated well to a TV movie or series. I will note also that this edition is done on beautiful paper, and is far superior than the mass market publications that some other paperbacks by Masterton are on. Hopefully this will be out in hardback, with the correction of course for page 72, since it has a great narrative and is a superb story paced in the manner only Masterton can bring forth

Published by Thriftbooks.com User , 16 years ago
Being deaf and able to lip read that fast is amazing. I enjoyed this book, not only because it was made in my home town of Portland, Oregon, but that it was full of great surprises and a shocking ending. Without any of that, it would be a lame book. Some people have issues with the ending of the book, but instead of predictable endings which can be boring, it is good to spice it up with a little of the impossible. Graham Masterton is the Master of horror. If you did not like this book, try his other books: Devil in Grey, The Rook series (ROOK, Terror, Snowman, Swimmer and the others) to name a few. He mixes horror with humor and it really makes for a great book. I have tried many other horror writers but they do not have the meat and juice that his books do. Try his other books and i guarantee that you will not be disappointed.

A fantastic horror and thriller writer

Published by Thriftbooks.com User , 16 years ago
Hearing impaired Holly Summers is very happy with the life she has. She has an adorable little girl named Daisy, works for the Portland child welfare office and is a court accredited lip reader. She works for the police and when she sees people talking about a crime they are about to commit she calls the cops and her testimony is legally acceptable in trials. As a social worker she sees many heartbreaking things done to children and when she calls on Mary Joseph, she finds her beaten to a pulp and her son Daniel is unconscious with almost every bone in his body is broken. They arrest Native American Elliot Joseph who puts a curse on Holly that seems to effectively work. Holly is suspended from her job when a young girl commits suicide after she confronts her about being abused. Her daughter is kidnapped and the man she considers a dear friend is responsible because he wants her to participate in an orgy. If she cooperates Daisy will be released. Is it bad luck or an Indian's curse? Either way Holly's life is in danger. Graham Masterton is a fantastic horror and thriller writer who knows how to build a growing atmosphere of foreboding. The story line shows the horrifying things Holly sees in her work as well as the supernatural kind where an evil man persuades a good woman to believe that one person can curse another because of the happenings of certain events in her own life seemingly the result of the curse. Fans of Richard Laymon and Douglass Clegg will want to read UNSPEAKABLE. Harriet Klausner
Copyright © 2020 Thriftbooks.com Terms of Use | Privacy Policy | Do Not Sell My Personal Information | Accessibility Statement
ThriftBooks® and the ThriftBooks® logo are registered trademarks of Thrift Books Global, LLC