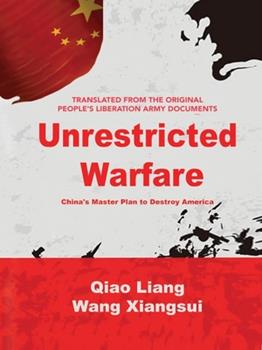 A sobering and fascinating study on war in the modern era, Unrestricted Warfare carefully explores strategies that militarily and politically disadvantaged nations might take in order to successfully attack a geopolitical super-power like the United States. American military doctrine is typically led by technology; a new class of weapon or vehicle is developed, which allows or encourages an adjustment in strategy. Military strategists Qiao Liang and...

Published by Thriftbooks.com User , 18 years ago
Although the content of this book may not represent the view of the average person in China, it is unfortunately true that China's People's Liberation Army is itching for a fight with the U.S. The PLA thinks that it needs to bloody America's nose before it can take its place in the world as a superpower, and all indications are that the PLA is getting ready to do just that. The PLA is being specifically designed to fight a war with the U.S., and if Jiang Zemin gets his way the fight will occur in the next 3 years.

Published by Thriftbooks.com User , 19 years ago
I when I saw the one star reviews on this website I became very suspicious. I read the book to see for myself and came to the conclusion that those giving this book one star 1) Did not read the book, 2)Are those who wish for this information not to get out, 3)Americans who do not care about the well being of this country because they let there political idealogy get in the way of realizing and admitting to the truth. I say get with the program people, and stop being useful idiots!

Published by Thriftbooks.com User , 19 years ago
...commodity" MArshall McLuhan said something that in "The Medium is the Massage". Little did McLuhan realize that the people who understood his message best would be two officers in the People's Liberation Army of China. Forget the tasteless cover and the report's Americanized title and the absolutely idiotic introduction by some neocon cretin named Al Santoli. Santoli's introduction demonstrates just how little the Right and most of the Left in this country understand what 9/11 really meant.The ideas of Fuller, McLuhan, J. G. Miller, Teilhard and other visionary geniuses of the 2oth century are evident in the theories of Colonels Qiao and Wang. Reading it as the second Bush invasion of Iraq enters Phase Two, it seems obvious to me that the U. S. military's approach was a direct answer to they perceive as the new Chinese doctrine of warfare. But, that's just it. It is NOT a doctrine. This book is not a prescription of anti-American warfare. It's a description of the new world the U. S. traditionalists find themselves in and with which they believe they can cope and control by simply applying more complex technology coupled with brutal determination.The entire Right and many Liberals are infected with this delusion. it is a denial of reality based on ignorance. Everyone knew the U. S. would win the military battles of this "war" in Iraq. Qiao and Wang demonstrate how seeing our victories as a win is part of the dysfunction that will bring about our fall. And they know full well that China, too, is vulnerable to the same forms of warfare. Any monolithic, centralized government is. The hegemony that the U. S. is trying to establish is actually strangling it. It will be a long , slow and bloody death.This is a brilliantly written analysis of the New Realities which began with Vietnam's astonishing defeat of the United States. We have been losing W. W. IV ever since and the old dinosaurs of world who are in charge of the present war and marching in lockstep into a historical La Brea like so many lizard lemmings. The problem is, they are taking the rest of us with them. The book is an essential read for anyone who cares about the future of human beings on Earth.
Trustpilot
Copyright © 2022 Thriftbooks.com Terms of Use | Privacy Policy | Do Not Sell My Personal Information | Cookie Preferences | Accessibility Statement
ThriftBooks® and the ThriftBooks® logo are registered trademarks of Thrift Books Global, LLC