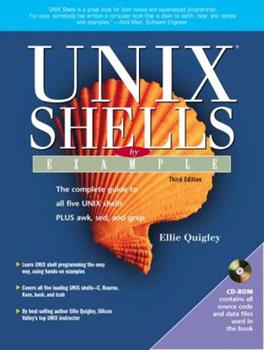 'Approximately 50,000 Canadians move to the U.S. every year. Already, there are hundreds of thousands of ex-Canadians living south of the border. The similarity in language, currency, culture, services, and products of these two countries can lead Canadians in the U.S. to mistakenly think that its laws and customs are also the same. It is these areas where The Canadian in America will be crucial to anyone either contemplating a move or already living...

Published by Thriftbooks.com User , 17 years ago
If want to learn about shells and you learn by example, like I do, this book is essential. The first 6 chapters (nearly 200 pages) goes over the basics of all shells; what they are, what they do, what programs are most used to manipulate data in them. There are whole chapters devoted to grep, sed and awk, and the author doesn't skimp on details. You will be a virtual grep/sed/awk guru by the time you learn everything in these chapters. Chapters 7-15 introduce and get you into scripting of each major shell: Bourne shell, C and TC Shells, Korn shell, and Bash (bash is the standard shell in most linux distributions). It then spends a chapter on general debugging shell scripting problems. The last chapters touch upon system administrating via the shell (rather than using gui tools). Again taught by example so it's very clear to the reader. I learned more about bash (my shell of choice) from this guide than any other that I've read, and not for lack of trying, I've read several bash guides. I was happy to see that examples given were explained line-by-line so you don't lose track of what is happening in each example. I was delighted by the useful appendices covering useful commands and giving side by side shell comparisons. This is my favorite shell book to date.

Published by Thriftbooks.com User , 17 years ago
(This is a review of the 4th edition) As I start playing around more with Linux, I'd like to get into some shell programming. After reviewing Unix Shells By Example (4th Edition) by Ellie Quigley (Prentice-Hall), I think I've found the book I need to get started. Chapter List: Introduction to UNIX/Linux Shells; Shell Programming QuickStart; Regular Expressions and Pattern Matching; The grep Family; sed, The Streamlined Editor; The awk Utility; The Interactive Bourne Shell; Programming The Bourne Shell; The Interactive C And TC Shells; Programming The C And TC Shells; The Interactive Korn Shell; Programming The Korn Shell; The Interactive Bash Shell; Programming The Bash Shell; Debugging Shell Scripts; The System Administrator And The Shell; Useful UNIX/Linux Utilities For Shell Programmers; Comparison Of The Shells; Index I know that there are a number of different shell scripting platforms, but I really don't know enough to understand what is different between them. In a single book, Quigley covers all the options so I can start to make some decisions about what direction I'd like to go in. And regardless of whatever choice that might be, she covers all the different platforms in equal depth so I don't have to go out and buy another book to get started. Each chapter is filled with a number of examples, immediately followed by an explanation of how the example works. So not only do you have the benefit of reference material on how something like the grep utility works, but you also have the benefit of seeing working examples in order to translate theory into practical knowledge. Her style of writing is clear and concise, and I really think that with a little time on my part, this book will take me well down the road to where I want to be. An excellent choice if you're looking to get into command line scripting of your UNIX or Linux systems...

Great book for beginngers as well as advanced users

Published by Thriftbooks.com User , 18 years ago
I have been working with shells since about 5 years, and besides the "man" pages, this book has been the only one I ever used when writing shell scripts.I rarely comment on books, but I really felt this one needs my appreciation.The highlights of this book in my opinion are:- a large and very well index--it really helps you finding your answer quickly- very good introduction to shells and environments- very good introduction to regular expressions- very good introductions to the very important utilities grep, sed, and awk- detailed sections with many examples for interactive usage of shells as well as programming shell scriptsFor many people the sections on the c shell, korn shell and TC shell may seem unnecessary, since (I assume) the majority is using the bash shell. However, some things in those sections apply to the bash shell as well, and besides that one never knows which shell one has to work with one day--so by having it all in one book, you should be set.Last but not least I would like to add that there is no need for reading this book from start to finish, you can just jumpt right into any section, as I have always done ;)Get this book if you want a great all-round book on shells, and should you still get stuck, type "man ..."

Published by Thriftbooks.com User , 21 years ago
The 'Unix Shells By Example' is a well-known book in the field of shellscripting. It has about 640 pages with a CD-ROM included. The book is well edited, with good white-spacing and clarity in layout. Having taught the unix shells for over 15 years, the author really knows her stuff, and the text is factual and to the point.The index seems complete and one doesn't have a difficulty in finding the right info one is looking for. These properties should be normal for books, but computer books seem often an exception.The chapters deal about the central unix-commands for scripting (Grep, AWK,SED) and the big three shells (korn, bourne and C-shell). The author explains the subject in great detail by showing examplescripts. First you're given the data or text to be edited, then the script or commandlines and finally a lenghty line-by-line explanation of the scriptsyntax. The subjects of the scripts range from explaining the basic unix-commands to complex intertwining regular expressions, functions, obscure nawk options etc. The author also touches the subject of shell-history, making comparisons of the three shells, giving 'lab-exercises' and some unix background about commandtypes,login and inheritance. The apparent subject that is missing in this book is the Bash shell, the preferred shell in the Linux community. However, a seperate book on this subject is available (Linux Shells By Example). As with all books that have an extensive coverage of the subject, this book too can be overwhelming for the absolute beginners in shellscripting. It takes some time before one writes sytax like:nawk -F: 'BEGIN{printf("What vendor to check?");\getline ven {print"Found" ven "on record no" NR}' vendor Instead of searching the pages for the basics, beginners should consider buying an entrylevel book. Conclusion: For the intermediate scripter who visits shellsites like shelldorado and lurks newsgroups in search of advanced programming constructs to steal this book is a great find. You won't be left with a feeling that you'll outgrow this book. For newcomers in scripting this should however not be the first book to buy, they're better of with titles like "learning shellscripting in 24 hours". But once through these 24 hours, this book can only be warmly recommended.

Outstanding Book. A must for learning shell programming.

Published by Thriftbooks.com User , 22 years ago
Several of my fellow system engineers bought this book and they loved it. I purchased this book about three weeks ago and I have not put this book down! There are still several typos in the examples, but, like all programmers and engineers know, debugging is part of the job. In all honesty, fixing and tweaking the examples is actually fun. I strongly recommend creating the labs at the end of the chapter. These exercises will solidify your knowledge.
Trustpilot
Copyright © 2022 Thriftbooks.com Terms of Use | Privacy Policy | Do Not Sell or Share My Personal Information | Accessibility Statement
ThriftBooks® and the ThriftBooks® logo are registered trademarks of Thrift Books Global, LLC