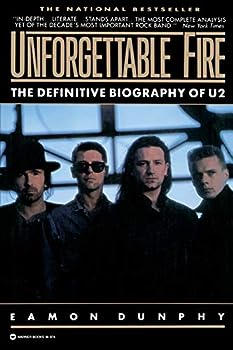 Unforgettable Fire: Past, Present, and Future - the Definitive Biography of U2

This description may be from another edition of this product. U2 has always been a band shrouded in mystery. Now, for the first time ever, comes a painstakingly detailed and honest account of the remarkable band from Ireland whose political, spiritual and...

A Brilliant and Compelling Book About The Rock Group U2!!!

Published by Thriftbooks.com User , 18 years ago
This book is a wonderful look at the band known as U2. Named after a spy plane, this story takes you back to the band's humble beginnings in Dublin, Ireland and how a group of four young boys became one of the greatest rock and roll bands of all time!!! It shows what incredible hardships each member had to face growing up, and all the obstacles the band has overcome. This books leads up to the band successful breakthrough album The Joshua Tree, and all the sacrifices the band had to endure to make it to that point. It also tells how Bono(Paul Hewson), and The Edge(David Evans) got dubbed their new names. Bono's name actually came from a hearing aid shop in Dublin called Bono Vox, which is latin for "good voice." That moniker seems to fit him perfectly, since he does have a damn good voice!!! Bono ended up giving the edge his name. I can't remember the source for his name, though. I'd better start reading the book again!!!

Published by Thriftbooks.com User , 19 years ago
Very detailed biographical information helps you understand where the band members (and others close to the band) come from and how and why they got to where they are now. Unfortunately this book only covers up to the release of Joshua Tree, but its great for information on the real early and formative years of the band. I found that some things were repeated many times throughout the book but at least that made you really remember them well. It was a fun read for a fan who wants to know more.
Copyright © 2020 Thriftbooks.com Terms of Use | Privacy Policy | Do Not Sell My Personal Information | Accessibility Statement
ThriftBooks® and the ThriftBooks® logo are registered trademarks of Thrift Books Global, LLC