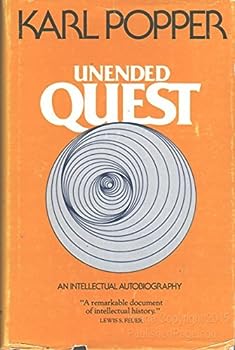 For this edition Karl Popper added a preface 'Postscript to Marxism', as well as an additional bibliographical essay.

An insight into one of the Greats

Published by Thriftbooks.com User , 18 years ago
Karl Popper is yet another exceptional student of the Austrial school that produced a plethora of scientists, mathematicians, philosophers and economists at the turn of the century. The only other comparison would be the extraordinary number of scientists from tiny Scotland that almost single-handedly began the Industrial Revolution. Popper and friends were Renaissance men, masterful in numerous subjects, at ease in a laboratory, classroom or lecture hall. They were rationalists of a specific kind. Not for them, the ramblings of a street preacher, social "activist" or leader of mass movements. Instead their actions were didactic, in the cause of something greater. Popper served as gadfly, professor, mathematician, scientist, philosopher and could be considered a spokesman for the groups. His life in Europe was remarkable for what was accomplished - oh, to have a such an inquiring, multi-faceted mind!!This book is perhaps more approachable that some of his others. The title says it all; it is the story of the evolution of an intellect that seemed to retain its core. He was interested in so many things and so many areas that all his works are to some degrees syntheses of his interests. Whether he is admiring the logic of scientific discovery or the illogic of taxes, he is brillant, informative and endearing. The intellectual battles are here for all to see (and choose sides). He emerges with not only his mind but his soul intact.
Copyright © 2020 Thriftbooks.com Terms of Use | Privacy Policy | Do Not Sell My Personal Information | Accessibility Statement
ThriftBooks® and the ThriftBooks® logo are registered trademarks of Thrift Books Global, LLC