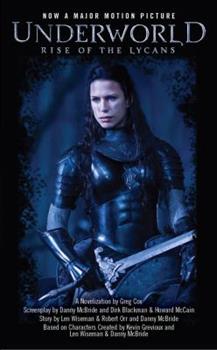 (Book #4 in the Underworld Series)

The official movie novelization of the latest film in the blockbuster action/horror movie series, Underworld --coming to theaters in January 2009 from Sony Pictures Centuries ago...two ageless and terrifying races--the aristocratic vampires and the feral lycans--are bound by a cruel, ancestral relationship between master and servant, and eternally separated by the ongoing, violent rivalry between their two species. But unknown to both nobility and...

We receive 16 copies every 6 months.

If you like the movie then you'll love the book!

Published by Thriftbooks.com User , 12 years ago
Okay, I read the book before I saw the movie. I would not say that it was a mistake, it's just that the book goes into so much more detail than the movie, however simialr they are. If you saw the movie and liked it definately read the book, it's well worth it!

Published by Thriftbooks.com User , 12 years ago
This is a prequel to the first movie.It's the story of how the war between the vampres and lycans began.Like the movie,it's just as good as the first two.Cox has written an excellent adaptation with well-drawn characters,a solid storyline,and great action sequences."Underworld" fans,action lovers,and horror freaks will all enjoy this one.Underworld: Book 1 (Underworld (Pocket Star Books)) (Bk. 1)Evolution (Underworld)Underworld (Widescreen Special Edition)Underworld - Evolution (Widescreen Special Edition)

Underworld:the rise of the lycans

Published by Thriftbooks.com User , 12 years ago
First of all I haven't seen the movie yet. The book was great and if the movie is the same as the book, its going to be a hit. I could'nt put the book down. It was easy to follow and kept me glue to the story. Learning about Sonja and Lucian and what the lycans were like was breath taking. And finding out about Viktor and how he treated his own daughter, he was evil to the very end. I really enjoyed reading the book. The only thing that was not mention was, who was Amelia and where did she come from? Thank you, Rachel

Underworld of how it all began

Published by Thriftbooks.com User , 12 years ago
This book gives us the full scope of how the war between the vampires and the lycans began. The author captures it so well no wonder he has written all of the underworld stories. Thank you Mr. Cox for giving us what we wanted to know about how it all began. I am a true fan of all the underworld novels and movies.
Copyright © 2020 Thriftbooks.com Terms of Use | Privacy Policy | Do Not Sell My Personal Information | Accessibility Statement
ThriftBooks® and the ThriftBooks® logo are registered trademarks of Thrift Books Global, LLC