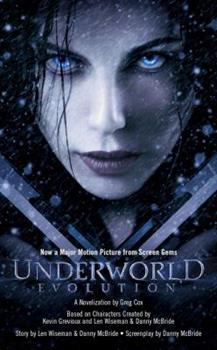 (Book #3 in the Underworld Series)

THE WAR IS OVER.BUT THE TRUE HORROR HAS ONLY JUST BEGUN....For more than six hundred years, Selene was a Death Dealer, a vampire warrior dedicated to the destruction of her people's savage enemies: the werewolves. But then she learned the shocking truth behind the ancient conflict and turned against her undead masters.For all of his mortal life, Michael was an ordinary human, ignorant of the night's darkest mysteries -- until he found himself caught...

Published by Thriftbooks.com User , 15 years ago
based on the movie from 2006, this book pretty much follows the plot of the movie, although there are a few added scenes and different perspectives of the characters. Sometimes we're at Selene's p.o.v and then it might be Michael's or Marcus. Great book if you loved the movie.

Published by Thriftbooks.com User , 16 years ago
I truely enjoy this series and hope their will be another book and movie. I am not a huge fan of vampire movies, and when I heard about the original Underworld movie, I wasn't all that thrilled. I mean, a Romeo and Juliet story using vampirea and werewolves with automatic weapons? Oddly enough, it was a really enjoyable story. Underworld Evolution picks up where the original leaves off. Selene and Michael are making their way from the battle where Selene dispatched her former mentor. Michael awakens as a hybrid, quite different from Micheal. In the course of the story, Selene learns about the history of the importals, and the truth about the history of the Eldars and the murder of her mortal family. All the while, her relationship with Michael grows.

Published by Thriftbooks.com User , 16 years ago
Greg Cox writes yet another awesome book in the Underworld series. He fleshes out the characters and plot that the movie doesn't. Even though the movie rocks!! Better than the first. But needed more indepth characterizations from Selena and Michael. But like the book, it was never boring and full of awesome vampire vs. werewolf action and adventure. A must see movie. A must read book.

Published by Thriftbooks.com User , 16 years ago
So many books based on movies are empty of original thought, but this volume breaks the mold. Greg Cox has taken Underworld: Evolution and brought it to life before many, myself included, have seen the feature film. Some might say knowing what is going to happen in a movie before you see it defeats the purpose of seeing the film, but that is definitely not the case here. All of Mr. Cox's vivid illustrations through words have given me a new appreciation for the first film and its upcoming sequel. The movie notwithstanding, I would recommend this to anyone who loves fantasy. You don't have to read the first book to understand this one, as there are flashbacks that bring the reader up to speed. Discover the trials and tribulations of Selene and Michael. You won't be sorry.

Published by Thriftbooks.com User , 16 years ago
This book is one of the best books of 2005. It has a great storyline and is full of action. When the movie comes out I look forward to seeing it. Greg Cox wrote a fantastic book version of the movie and I praise him for that. I recommend this book to anyone who enjoys the underworld series of books. This one takes the cake. I will not spoil it for anyone expect that Selene and Michael become closer and the action is bigger and more exciting.
Trustpilot
Copyright © 2022 Thriftbooks.com Terms of Use | Privacy Policy | Do Not Sell or Share My Personal Information | Accessibility Statement
ThriftBooks® and the ThriftBooks® logo are registered trademarks of Thrift Books Global, LLC