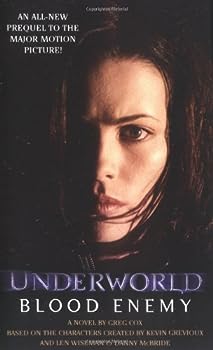 (Book #2 in the Underworld Series)

This description may be from another edition of this product. BEFORE UNDERWORLD, THE WAR RAGED ON.... For untold centuries, a secret conflict has been waged between two immortal rivals: The vampires -- ageless aristocrats with a sensual appetite for blood and...

Published by Thriftbooks.com User , 13 years ago
Blood Enemy ( Underworld, Book 2) As a senior citizen there are not many vampire or si-fi I have not read. I do admit to being a novice at reviews as I spend most of the time reading or writing for myself. Mouser I hate to worry you but I could not state your were any more wrong about Greg Cox's writing.. I was glued to this book from start to finish and that is a rarity for me, I usually read 3 or 4 books at the same time. I can only pray that if they make this movie they use the same Lucian they used in movie 1. This is Lucian and Sonja's love story and very well written I might add. Cox hops from now to then but I must admit he is very good at it.. My favorite instructor told me once before you can break the rules you have to know the rules. Cox has them down pat, I only hope we have another sequel. Starseed

THE BEST (also the plot for the 3rd movie)

Published by Thriftbooks.com User , 14 years ago
This is one of the best novels that is derived from the movies I have ever read. THis book is truly its own. While everyone who has seen or read Underworld, you know that there was a war between the vampires nad lycans. The lycans served the vampires and were the slaves during the day. When Lucian and Sonya fall in love and Sonya gets pregnant things go horribly wrong! That is what we know from the movie. In this book we get the full story and all its details with scenes that go to the present where Selene is in the middle of case with lycans and the finding of some of their experimental weapons. This book is also the base of the 3rd Underworld movie that is set to release in 2008.

Published by Thriftbooks.com User , 16 years ago
This was a great prequel to the first story. It really put into perspective how the romance between Sonja and Lucian came to be and it also clarified questions that arose after the first installment of Underworld. Great story, especially if you're a die hard Underworld fans such as myself.

Published by Thriftbooks.com User , 16 years ago
Picked up this by by accident and gasped. "An Underworld Prequel?" Says I... and the rest is history. This book was very hard to put down. Like with all prequels it was predictable, but I enjoyed every moment of anticipating the known end. I felt the story was well told and loved that it put some definition to the love story that started the war that is waged in the film Underworld and the upcoming film Underworld: Evolution. Someone I offered to loan the book to, however, complained because it was about Sonja and Lucian rather than Selene. If you're looking for or expecting a tale about Selene this is not it.

My All Time Favorite!!

Published by Thriftbooks.com User , 16 years ago
I am an obsessive fan of the Underworld movie, and this novel just made it an even more incredible story and universe. The character of Lucian is so amazing, and I fell in love with the way this book expanded on him, making his emotions and inner-being present. The action in thrilling, and probably more violent than any book I've ever read, but that's good isn't it? The author's words and discriptions are easy to visualize which doesn't complicate things. I love how the characters of Kraven and Soren were expanded on, but I did have a problem with the jumping back and forth part. I thought some of the more modern chapters were slightly unrealistic, even though they were still entertaining. I would have been happy with the intire book being set in Lucian and Sonya's lovers time even if I am a huge Selene/Micheal fan, cause the older setting were so much more interesting. I still wish Lucian could really see Selene, since she is supposed to look so much like Sonya, but.... My biggest complaint with the book is that the whole "love" that starts this war seems more like a crush-and-one-night-stand sorta thing. The two characters aren't together long before they are found out, so the "love" never really has time to develop, and is intead just skipped over by saying "the two met secretly for months." Those months should have been expanded on. Still, it was incredible, and I actually cried when I read it, and I've NEVER done that before. I was also extatic when Lucian finally turns into a werewolf without a full moon. That was probably my favorite part of the book, cause the dialouge was SO incredible. Awesome read!
Copyright © 2020 Thriftbooks.com Terms of Use | Privacy Policy | Do Not Sell My Personal Information | Accessibility Statement
ThriftBooks® and the ThriftBooks® logo are registered trademarks of Thrift Books Global, LLC