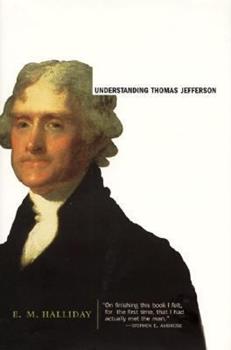 Recent biographies of Thomas Jefferson have stressed the sphinxlike puzzles of his character -- famous champion of freedom yet lifelong slaveholder, foe of Miscegenation yet secret lover of a beautiful slave for thirty years, aristocrat yet fervent advocate of government by the people. E. M. Halliday's absorbing, compact, and lucid portrait recognizes these and other puzzles about this great founder, but shows us how understandable they can be in...

A Different View of a Founding Father

Published by Thriftbooks.com User , 18 years ago
A word of warning from the get-go: E. M. Halliday's "Understanding Thomas Jefferson" is not your standard biography of our third president. It does not fawn, nor does it marbleize Jefferson as some untouchable, unknowable, walking mystery so impenatrable that none but the most scholarly of biographers dare touch him. What you come away with from this book is a sense that you know Jefferson just a bit better or, barring that, you at least have had a light shown upon areas of his life not heretofore illuminated for fear that doing so might "cut him down to size", make him merely mortal. Halliday takes us through just about all the phases of Jefferson's life, from his youthful years, through his marriage, his various relationships with the three main women in his life (outside of his daughters): his wife, Martha, Maria Cosway and Sally Hemings. He shows us Jefferson's stormy relationship with Alexander Hamilton while the former served as Secretary of State and the latter Secretary of the Treasury in Washington's cabinet. He unsparingly comments on previous, "god-like" biographers of Jefferson, including Dumas Malone and Merrill Peterson, pointing out their (to him) flaws and blindnesses (especially on the subject of Sally Hemings). He steers the reader in other directions of thought that these men did not see fit to address, which failure, as Halliday would have it, presents an incomplete picture of their celebrated subject and cheats posterity of a history which is "meaningful". There are blunt discussions and speculations upon the nature of Jefferson's sexual development, both before, during and after his ten years of relative marital bliss with Martha Wayles Skelton. If you are someone who just cannot abide the thought that Jefferson had a sexual and, apparently, long-term and loving relationship with Sally Hemings (despite acknowledged DNA evidence to the contrary), or who thinks that after Martha Jefferson's death, her husband turned off his sexual desires like one turns off a kitchen faucet and became an emotionless stone statue, then perhaps this book might not be your cup of tea. Try it anyway. Mr. Halliday makes his case rationally, calmly and gradually, debunking a few things and confirming others along the way, for example, rendering the supposedly "long-lasting" passion of Jefferson for Maria Cosway (the married English lady with whom he flirted - and we really don't know what else - while he was ambassador in Paris) much shorter than it actually was, primarily because ... well, Maria was apparently a bit of a fluff-head. And you can well imagine that Jefferson, of all people, with his love of learning and books and education, could not long have endured a ditzy female. If you had read nothing about Jefferson, and wanted to use this as a first introduction to the man, I'd discourage it, recommending that you read at least one other "mainstream" conventional biography before reading E. M. Halliday's work in order to se

A Human View of an American "Superhuman"

Published by Thriftbooks.com User , 19 years ago
I selected this book somewhat blindly from my library after learning that Thomas Jefferson was, if not officially, predisposed to a Unitarian belief system and desiring to learn more about who he was as a person. I was pleasantly surprised to find this book showed a real insight (even though speculative in some cases) into who Jefferson was as a living, breathing, feeling human being, and I recommend it highly.Most biographies are full of what I like to call "textbook" prose. They try to pass themselves off as interesting reads, but they are usually no more than boring recitations of dates and places with cautiously worded speculation about what these facts might have meant. They focus on the history of the nation more than the history of the person (which is what I thought biographies were supposed to be about!). This book is far from that! In short, if you are looking for a glimpse into what the personal life of Jefferson probably was like, you will love this book! It is truly engrossing, and a liberating view of one of the founding personalities in our nation. I personally do not believe that you can understand the impact a person has on history without knowing what their underlying personal motivations are. If, however, you prefer your history with only those details that can be proved beyond any doubt and clean of the "distraction" of the messiness of real life that we all endure, no matter how famous or great (emotion, personal failure, and, oh, yes, even sex), don't even consider this read. But if you're willing to suspend your discomfort with knowing the starkly human and ordinary details of the "superhuman" lives in our history (that might change your hallowed view of these great figures), you will have a real treat awaiting you. And, I truly believe, the insights necessary for really comprehending the usual recited historical facts.

Unusual, but Thoughtful and Entertaining

Published by Thriftbooks.com User , 19 years ago
If you're looking for a good, all around biography of Thomas Jefferson, this is not the book for you. "Understanding Thomas Jefferson" attempts to do exactly what the title suggests-understand Thomas Jefferson, but as a human being rather than as a statesman. E. M. Halliday's thesis is that virtually every standard biography of Thomas Jefferson describes him as a complex individual and highlights the contradictions in his life that border on hypocrisy (maybe even cross that border), but few try to put them in perspective.This book attempts to do just that. Much of it (especially the first part of the book) deals with Jefferson's relationships with the women in his life. Admittedly, much of it is conjectural, because there's not much documentation extant. For example, Jefferson burned all his correspondence with his wife and mother. But Halliday has done a lot of research and puts his conjectures in context with documented events in Jefferson's life as well as with the social norms in which he lived.If the author attacks the renowned Jefferson biographers (e.g., Dumas Malone and Joseph Ellis) for concluding that Jefferson's relationship with Sally Hemings was a myth, the criticism is well deserved. I read Joseph Ellis's biography "American Sphinx: The Character of Thomas Jefferson" when it was first published in 1997 and was astonished with his conclusion (in the Appendix of the book) that the "rumors" about Jefferson's relationship with Sally Hemings were not true. Now, this was the first biography I had ever read about Thomas Jefferson, so after having read what Ellis himself had written, I was shocked that he could come to that conclusion. If you find Thomas Jefferson to be a fascinating individual (as I do) and have already read some mainstream history/biography about him, then you will probably enjoy this book immensely (as I have). It's different, it's conjectural, and that's its appeal.

Published by Thriftbooks.com User , 21 years ago
For fifty years I've read extensively about Jefferson,and to understand him, about the history of his time, and about his contemporaries. This book, because it gives incredible insights into his mind, helps to explain his inconsistencies and to solve the puzzles about him. It was difficult to put this book down, but when it was finished, I felt that, at last, I understood this amazing person described by Abigail Adams as "one of the choice ones of the earth."
Trustpilot
Copyright © 2022 Thriftbooks.com Terms of Use | Privacy Policy | Do Not Sell My Personal Information | Cookie Preferences | Accessibility Statement
ThriftBooks® and the ThriftBooks® logo are registered trademarks of Thrift Books Global, LLC