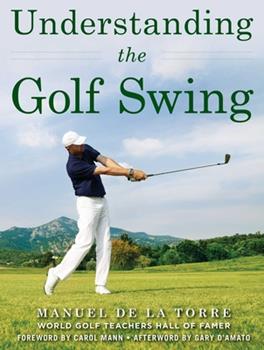 This full-color modern classic of golf instruction by teaching pro Manuel de la Torre (former PGA Teacher of the Year and Golf Digest ranked teacher) presents a simple approach to the golf swing based on Ernest Jones's widely praised principles. Understanding the Golf Swing includes information on the philosophy of the golf swing (with emphasis on the development of a true swinging motion), the most thorough analysis of ball flights available, and...

Published by Thriftbooks.com User , 18 years ago
Am an avid golfer and over the past 30 years, have enjoyed reading every golf instruction book possibly ever written, and tested each theory in the process. This book encompasses all instruction ever written, in that it shows why each theory is correct, but only for the author. In other words, de la Torre shows and proves that moving a golf club in a positive manner using a swinging motion, will create different idiosyncracies for each person moving the club. Hogan moved it differently than Nicklaus, who moved it differently than Tiger, etc etc. However, the common denominator in all is that each of their bodies responded to the swinging motion of the clubhead, in order to produce the intended result: that of moving the club in a centrifugal motion toward the target. De la Torre's golf theory comes from his father Angel and from the seminal voice of Ernest Jones, father of the Swing the Clubhead theory. De la Torre differs from Jones in his explanation for swinging the clubhead in a simple yet I believe correct way. Instead of the hands swinging the clubhead all the way through the swing, de la Torre believes that on the downswing, the golfer swings the entire club (not just the clubhead) using the arms (that part of the arm from the shoulder to the elbow) toward the target, and that the body responds to the movement of the clubhead while using the arms. After all, centrifugal force starts at the center of the circle, the radius point, and that in a golf swing is between the shoulders - this is precisely why he says swing with the arms on the downswing. His teaching revealed to him that the language of swing the clubhead only on the downswing made golfers too handsy, as the golfer's hands should instead be sensing and reacting to the outward pull of the clubhead. De la Torre's approach is simple yet powerful. What did I do wrong, a phrase that every teacher hears and responds to, is replaced with "you did not do what you should." In other words, corrective or negative focus is replaced with a positive focus. As de la Torre says, when we drive home, do we think of all the places we do not want to travel? His simplicity has as its cornerstone of moving the club in a centrifugal and positive manner. The swing is an arc, and in any given arc, centrifugal motion creates the greatest amount of speed and accuracy possible. His backswing consists of only using the hands to move the clubhead in a centrifugal motion over the right shoulder, while the relaxed body responds to the movement. And the downswing is nothing more than moving the entire club using the upper arms only, again, as the body responds to the movement of the club. Watch Tiger really hit one hard - he doesn't think of whipping his hips more quickly, he only thinks of moving his arms quicker, and his body will move naturally to support that motion. The golf swing is nothing more than moving the club in a centrifugal manner towards the target - the body does nothing but respond to that

missed some greens because I hit the ball too far

Published by Thriftbooks.com User , 21 years ago
great book. boils the swing into an easy-to-understand approach that's also easy to perform. after reading book a few days ago, I hit the ball more solidly (farther) than I ever have. will have to reasses how far I hit each club, but that's a good problem to have. highly recommend this book.

Published by Thriftbooks.com User , 21 years ago
I must own easily 20-30 golf instruction books. Everything from The Little Red Book by Harvey Penick to Butch Harmon's Playing Lessons. This was by far the easiest to put into practice. His simple concept of swinging the club back with the hands and forward with the arms is a master stroke (pardon the pun). When using his method your mind becomes uncluterred and your body is free to just swing the club. I received this book about 3 days ago read it cover to cover and the re-read the "swing" section. Without having hit one ball on the range I went out and shot an 85 with a triple bogey on the last hole. (I'm a 16 handicap) Never have I felt so relaxed and confident on the course. Anyone who buys this book will improve his/her game. Good luck.

Published by Thriftbooks.com User , 21 years ago
KISS... Keep It Simple Stupid. If you filled the heads of tour pros with as much information as many of the top instructors fill ours and then had them contort every part of their body into uncomfortable positions, they would struggle to hit the ball well, too. Then, those same top instructors wonder why players try to play with dozens of swing thoughts. Umm, maybe because you filled their heads with them. I have read hundreds of golf books and the information always sounds like it will help. Then, I have experimented with many of them but time and time again they ask me to do things that I am simply unable to do or I end up over-cooking the good thing and end up with another problem. I was fortunate enough to work with Manuel de la Torre and he is a man who understands just how much the average human can handle and understands their physical limitations. Most of us don't have the strength, flexibility, hand-eye coordination, and time to do as the pros do. In addition, many of the moves the pros make are not necessary, helpful actions, but rather quirks that only work for them because they are world-class athletes. Manuel understands this and provides a simple, but profound, method to help all players enjoy this otherwise brutal game we love so much.

The Right Kind of Golf Instruction

Published by Thriftbooks.com User , 21 years ago
I was introduced to the Ernest Jones/Manuel de la Torre swing concept years ago after suffering through the "paralysis by analysis" induced by conventional golf instruction. The brilliance of this concept lies in its very simplicity. Jones took the emphasis off the use of body parts and positions and placed it on what really matters - creating a swinging motion with the golf club. Manuel, having grown up under the tutelage of his father Angel and Mr. Jones, absorbed these concepts as a youth and modified the Swing the Clubhead philosophy slightly. Instead of swinging the clubhead with the hands in the backward and forward direction as Jones asserted, Manuel asked his students to use the hands in the backswing, but to "swing the whole club (head and handle) with the arms in the direction of the target" in the forward swing. This concept teaches the golfer to do essentially one thing: swing the club and allow the body to respond to the swinging motion. After all, how many things can one think about in the 2.5 seconds it takes to swing a golf club?In Understanding the Golf Swing, Manuel expands on this basic philosophy, and guides the reader in creating a simple swing concept that will create a consistent, repeatible swing motion with all clubs. For anyone who has been taught to turn the shoulders, keep the head still, transfer weight, use the legs, use the hips, keep the left arm straight etc., this book will be liberating, and well worth the investment. By all accounts, Manuel de la Torre is a brilliant, kind, and gracious man; I hope this book helps golfers everywhere and gets Manuel the recognition he truly deserves.
Trustpilot
Copyright © 2022 Thriftbooks.com Terms of Use | Privacy Policy | Do Not Sell or Share My Personal Information | Accessibility Statement
ThriftBooks® and the ThriftBooks® logo are registered trademarks of Thrift Books Global, LLC