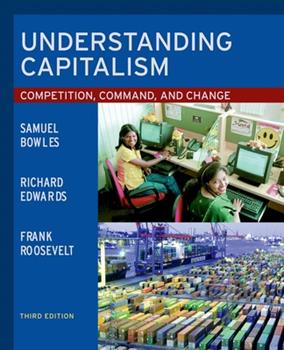 The third edition of Understanding Capitalism: Competition, Command, and Change is an introduction to economics that explains how capitalism works, why it sometimes does not work as well as we would like it to, and how over time it not only changes but also revolutionizes the world around us.The "three-dimensional approach" of the text focuses on competition in markets; command in firms, governments, and international relations; and change as a permanent...

Published by Thriftbooks.com User , 13 years ago
"Understanding Capitalism", as far as I know, is the best "alternative" introductory textbook dealing with how the economy works. Some of its content is similar to what one would find in a standard introductory economics textbook: the treatment of supply and demand, inflation, monetary and fiscal policy is fairly conventional, even when non-traditional notation is used. However, much else is fresh, insightful and non-dogmatic. It gives capitalism credit when it's due, and doles out criticism when it applies. Throughout the book, a "three-dimensional approach" is used: competition (horizontal market relations), command (vertical class relations) and change (developments over time) are all examined to give a meaningful picture of the economy. The book has three main parts: political economy (chapters 1-7), microeconomics (chapters 8-13) and macroeconomics (chapters 14-19). I will elaborate on some of the themes developed. POLITICAL ECONOMY Chapter 2 contains an amazing discussion of agency: "homo economicus", or as Amartya Sen proclaimed, the "rational fool" is challenged with the help of experimental game theory. Chapter 4 refers to history of economic thought and briefly reviews the ideas of Adam Smith, Karl Marx, Joseph Schumpeter, John Maynard Keynes, Ronald Coase and Amartya Sen. Chapter 5 examines the concept of surplus product, the conflict it engenders and its different uses. Chapters 6 and 7 discuss capitalism and class in the context of different economic systems (slavery, feudalism, central planning, etc.) and review the different phases of American capitalism. An important insight that comes from this is that not all capitalisms are the same: different social and institutional arrangements exist. In fact, the "varieties of capitalism" approach in comparative political science draws on the same insight. MICROECONOMICS Chapter 9 contains an extensive discussion of market failure (some basic game theory is used). Chapter 12 dwells on the insight that the labor market is fundamentally different from other markets. Purchasing labor is not enough: it has to be extracted. The authors use "efficiency wage" theory and a labor extraction curve to show why wages do not reach market clearing levels and why involuntary unemployment always persists (this is later used to discuss full employment in the part on macroeconomics). Chapter 13 expands the notion of labor extraction and describes the main methods of control used by firms: simple (as in a fast food restaurant), technical (as in a car factory) and bureaucratic control (as in an office). MACROECONOMICS Chapter 15 discusses economic development. It takes on the efficiency-equality trade-off often assumed by economists as well as argues that successful development depends mainly on the local institutions rather than foreign investment. In fact, even some neoclassical economists such as Dani Rodrik from Harvard would agree. Chapter 17 examines the business cycle in the context of the rate of pr

Published by Thriftbooks.com User , 14 years ago
I've always found studying economics to be an extremely frustrating experience. It seems my only options for learning about capitalism are (1) academic economists who study free-market processes but act as though political economy doesn't and never did exist, or (2) Marxist activists, who DO talk about political economy, but whose actual grasp of it is somewhat weak (and whose grasp of free-market principles is even weaker). Understanding Capitalism is really an anomaly in that it doesn't fit neatly into either of the aforementioned groups. This may be partly explained by the fact that at least one of the authors is a political scientist. Anyway, the book covers both free-market capitalist economics AND political economy, as well as providing (in the first chapter) a masterful summary of the rise and explosive growth of capitalism, first in England, then Europe, and now the world. I wish I could give you the whole table of contents so you could see how wide the scope of this book really is. Just to convince you that it isn't your standard college economic textbook, however, I'll give you a taste. Here are the titles of a few sections within the book: "Values in Political Economy" "Karl Marx" "Capitalism, the Surplus Product and Profits" "Class and Class Relationships" "The Capitalist Firm as a Command Economy" "Race and Inequality" (!) "The Limits of Democratic Control of the Capitalist Economy" Here are the titles of a few chapters within the book: "Capitalism Shakes the World" "Political Economy, Past and Present" "Competition and Concentration" "The Mosaic of Inequality" "Progress and Poverty on a World Scale" "The Future of Capitalism" If you have only heard criticisms of capitalism from Marxist literature, this book will be extremely valuable. You'll get a more scientific understanding of the same principles and a good presentation of the critique of capitalism scattered throughout the entire book. At the same time, you're sure to learn more about the workings of a free-market economy in the absence of government control (from both a neoclassical perspective and other perspectives). Most economics textbooks practically seem like they're written for business students, and they sure aren't interested in helping the reader really "understand capitalism." Read this book, and you will understand capitalism.

Published by Thriftbooks.com User , 15 years ago
Although this book is written by social democrats, and I am nowhere near a social democrat, I found it to be a very fair and accurate (as far as I know) treatment of economics. Instead of the one dimensional approach favored by the neoclassical economics that dominates American universities, it uses a three dimensional "political economy" approach. It analyzes markets, power relations, and economic growth. And it tells you a lot of very important things that textbooks leave out, mostly relating to flaws with markets. I recommend this book to anyone who is seriously interested in economics. However, it easy enough for anyone to understand.

Published by Thriftbooks.com User , 16 years ago
As taught in most undergraduate courses, the world of mainstream economics is an orderly place where markets clear, economic actors are rational, and social harmony prevails. Readers wanting more realism should read "Understanding Capitalism," a superb introduction to economics written from a social democratic perspective. As in any introductory econ text, the book carefully analyzes market processes. However, it also analyzes "command" relationships within firms and the relationship between capitalist dynamics and economic growth. This "three dimensional" approach to economics -- the authors prefer the term "political economy" -- offers a comprehensive view of the subject. The core chapters deal with microeconomics and macroeconomics. The micro section borrows from Marx and Schumpeter, and focuses on profit-seeking and "accumulation" as the keys to capitalist dynamics. The macro chapters draw on and update Keynes, and explain why unemployment is a persistent feature of U.S.-style capitalism (Swedish-style capitalism is a different matter). Throughout, economic concepts are related to ideas from anthropology, history, political science, and environmental science. Key points are illustrated with examples from the daily news; there is much algebra, but no calculus; the writing is clear. This is a very reader-friendly econ text. It is also refreshingly non-dogmatic. Although the authors are leftists, they acknowledge that capitalism obliterates archaic economic structures and lifts standards of living. They also highlight the role of profit-seeking in the development of new technologies and production methods. Their tone is consistently reasonable and fair to all points of view. Of course, no book is perfect. I would have preferred a more traditional analysis of microeconomics (complete with graphs showing average cost, marginal cost, and so forth). The sections on international trade and finance are too skimpy for a book trying to make sense of modern globalized capitalism. But overall, "Understanding Capitalism" is superb. No one taking a mainstream lower-division course on economics should miss it -- and anyone teaching such a course should consider using it as a supplemental text.
Copyright © 2020 Thriftbooks.com Terms of Use | Privacy Policy | Do Not Sell My Personal Information | Accessibility Statement
ThriftBooks® and the ThriftBooks® logo are registered trademarks of Thrift Books Global, LLC