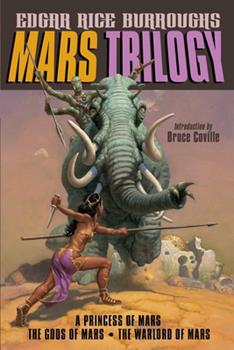 This bind-up of the first three John Carter of Mars books is an ideal 100th anniversary keepsake. Ever since A Princess of Mars was published in 1912, readers of all ages have read and loved Edgar Rice Burroughs' Barsoom series. Now, 100 years later, this brand-new bind-up contains the first three classic John Carter of Mars books: A Princess of Mars , The Gods of Mars , and The Warlord of Mars . Featuring an Introduction by Bruce Coville and illustrations...

Published by Thriftbooks.com User , 11 years ago
If you've never read ERB, this is the place to start. Collected here are the first 3 books of the John Carter series, his best work in my opinion. Fun, fast-paced, always entertaining adventure on Barsoom! ERB had as much influence on later sci-fi writers (from Heinlein to Farmer and beyond) as Verne, Wells or any other writer. Forget the critics, just pick up the John Carter series, and enjoy a new favorite.

Published by Thriftbooks.com User , 12 years ago
It can be a bit of a problem to be second-best. Take John Carter, Edgar Rice Burroughs's second-best known hero. While the better known Tarzan has become one of the most iconic characters in fiction, up there with Sherlock Holmes and Dracula, and featured in countless books, movies and TV shows, John Carter is still limited to the written page. Interestingly, according to The Best Science Fiction Movies Never Made, an animated Carter movie has been off-and-on in development since the 1930s; if made then, it would have been the first feature-length cartoon, even preceding Snow White. The last I've heard, there is a chance of a John Carter movie in 2011; maybe it'll actually happen, but it'll take a long time to catch up to Tarzan. The Martian Tales Trilogy is comprised of the first three Mars books. The first book, a Princess of Mars, introduces John Carter, an ex-Confederate soldier from Virginia who finds himself magically transported to Mars. Known to the locals as Barsoom, the planet is filled with various intelligent races of different colors. Carter will first encounter the warrior race of green men (actually all the races are interested in combat, but the green men are especially aggressive). In Barsoom's weaker gravity, Carter is almost superhumanly strong, and his fighting skills win the respect of the green men. His abilities will also be essential in rescuing the princess Dejah Thoris. Thoris is one of the red Martians who most closely resemble humans, and they soon fall for each other. The second book, The Gods of Mars, takes place twenty years later; fortunately the Martians age very slowly, and that trait has been passed on to Carter. He finds himself transported to the far south of Mars, an area that is supposed to be a paradise that old Martians go to when they become 1000 years old. Carter finds that the religion of Mars is a farce and goes about trying to expose it. Meanwhile, Dejah Thoris, thinking her husband Carter is dead, winds up in the area and in danger, ending the novel with a cliffhanger. All is concluded in the final book, The Warlord of Mars, which has Carter traversing Barsoom, contending with various colored Martians (black, red, white, yellow and green), all while trying to save Dejah Thoris from the clutches of some nasty villains. Fortunately, Carter is a man whose built up a collection of powerful allies in all the races. For all I've heard of Burroughs's rather antiquated views, the Mars books sometimes has a rather progressive view for WWI-era books. Not only does Carter find virtue in all the races of Barsoom, he even marries (and has a child with) one. But even if Burrough's is not always the most politically correct of writers (his views of women in particular are rather Victorian), his books are still a lot of fun to read, with tons of action and cliffhangers. And is often the case, fun is enough to make this a great read.

Published by Thriftbooks.com User , 14 years ago
My brother recommended this when we were in high school. I tried "Tarzan" and didn't like it so I didn't try the Martian tales. However, when I saw it at a bookstore on vacation on the cheap table, I snapped it up. I spent the whole vacation reading the trilogy. There are many weaknesses to the book. Plot holes abound. The book is a feminist nightmare. Maidens need to be rescued at every turn. Almost every female falls in love with John Carter. John Carter, due to his birth on earth, the lesser Martian gravity, and the thin Martian atmosphere, can outjump and outfight any two Martians. He is full of himself to almost ego mania. He is very clever at times and incredibly stupid at times. There is nothing more he likes than a good fight. Needless to say, I loved the book. Carter is extremely loyal. He always fights for the underdog no matter what the odds. He values his love for his Martian princess more than life itself. Even when exotic, beautiful and powerful Martian females try to seduce him, John Carter does not give them a second thought. He values friendship above his own life. If someone even shows John Carter a hint of bravery or compassion, John Carter is that person's friend for life. He also engenders loyalty from others. It is hard not to like a guy like that, even with all his faults. I liked other aspects of the book. Martian society is interesting. Stealing and lying are almost non-existent on Mars. However, murder and torture are common. John Carter almost instinctively understands how the society works and works it to his advantage. The scenes on Mars are exotic and well described. Burroughs also does a great job with action scenes. The book has a ton of humor. Burroughs seems to tease the reader along at times. Burrough is obviously having fun and pokes fun at John Carter. I was laughing out loud throughout the three tales. Coincidences abound in the book. Even John Carter notices providence seems to be looking out for him. The cavalry always comes at the right time or a loose strap on his equipment catches an outcropping and saves him from falling to a certain death. In summary, the book is great fun. It took me back to my childhood. Indiana Jones has nothing on John Carter of Virginia.

A Virginian on Mars

Published by Thriftbooks.com User , 16 years ago
This book contains the first three books in Edgar Rice Burroughs "Mars" series of novels. The hero, John Carter, is Burroughs' second most famous creation. Carter is a perpetually 30 year old Civil War veteran (Confederate) who inexplicably transports to Mars. He has thrilling adventures with various races of Martians and meets his true love, red Martian Dejah Thoris. These are very exciting stories, although the "science" in the science fiction is incredibly dated now. But if you are interested in early science fiction, you should give it a read.

Published by Thriftbooks.com User , 18 years ago
"Under the Moons of Mars" collects the trilogy that opens up the Martian series of Edgar Rice Burroughs. While better known for the creation of Tarzan, many fans of ERB feel that the John Carter books are even better. Besides, from Lin Carter's Green Star series to John Norman's Gor novels, it was John Carter's first appearance in "A Princess of Mars" that has inspired other adventures of men from Earth traveling to strange new worlds for wondrous adventures. This volume includes both that first novel and "The Gods of Mars" and "The Warlord of Mars," telling the story of how John Carter, a cavalier of Virginia, came to the planet called Barsoom by its natives.Originally published as "Under the Moons of Mars" in "The All-Story Magazine" in 1912, "A Princess of Mars" has John Carter dying in an Arizona cave, only to find his spirit looking down at his body. Opening his arms to the planet Mars, Carter is suddenly whisked to the Red Planet, where rival tribes battle while the planet's atmosphere continues to dissipate. Captured by a band of green six-limbed giants, Carter soon earns their respect for his prowess as a warrior and forges a lasting friendship with Tars Taras of the Tharks. But then the Tharks attack a fleet of airborne vessels and capture Dejah Thoris, the Princess of Helium, the greatest city on Barsoom. Of course, they get off on the wrong foot, since Carter knows nothing about the culture of the red humanoid race. But the lovely Princess of Mars has captured the Virginian's heart. Abandoning dreams of returning to Earth, he wants nothing better than to win her love. In the meanwhile, he has to protect her from the amorous attention of the depraved ruler of the Tharks, bring some semblance of civilization to the barbarian tribes, and stop all out war between the green men and red men from ending Barsoom's last chance for survival. After the first novel, Carter finds himself back on earth, separated from his beloved princess. "The Gods of Mars," originally published in 1913 as a serial in "All-Story Magazine," finds John Carter returning to Mars and setting off to find his woman. Knowing there stories were originally published serials is useful because Burroughs loads on the cliffhangers throughout the novel. When Carter returns to Barsoom a decade has passed and he finds himself in that part of the planet that the natives consider to be "heaven," which proves to be a more ironic idea. Carter has to reunite with his friend the fierce green warrior Tars Tarkas, fight with the great white apes of Barsoom and plant men, violate some significant religious taboos, survive the affections of an evil goddess, help with a slave revolt, fight in an arena, and still save Dejah Thoris in the middle of a giant air battle between the red, green, black and white people of Barsoom. Burroughs did not originally intended to write a trilogy, but his 1914 pulp novel "The Warlord of Mars" completes the epic saga of John Carter and Dejah Thoris (I re
Copyright © 2020 Thriftbooks.com Terms of Use | Privacy Policy | Do Not Sell My Personal Information | Accessibility Statement
ThriftBooks® and the ThriftBooks® logo are registered trademarks of Thrift Books Global, LLC