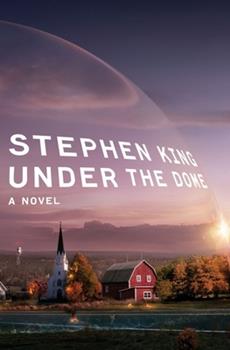 Don't miss the "harrowing" ( The Washington Post ) #1 New York Times bestselling thriller from Stephen King that inspired the hit television series, following the apocalyptic scenario of a town cut off from the rest of the world. On an entirely normal, beautiful fall day in Chester's Mill, Maine, the town is inexplicably and suddenly sealed off from the rest of the world by an invisible force field. Planes crash into it and fall from the sky in flaming...

Published by Caleb , 2 months ago
The book I received has different cover art than shown in image. Book is in great condition, but not what I expected/wanted.

Published by Bigz , 2 years ago
Ordered good condition if thats what good is i would hate to see acceptable but fast shipping and good book definitely worth it

Published by Thriftbooks.com User , 13 years ago
This incredibly violent and engaging version of "Horton Hear A Who" delves into the depths of the human heart and the pits of hell to bring out the best, and worst, in the average small-town people who live there. I have personally looked down upon huge cities from the heights of jet flights and thought about all of those self-important little people down there, so insignificent in that moment that I could barely make out the images of their greatest monuments. Stephen King can never top "The Stand," in my opinion, but this time he came awfully close. I couldn't put it down, and when I had to, I was almost afraid to pick it up again. I had to sit and catch my breath after I devoured the final words. Absolutely fabulous!

And THAT is Stephen King's genuis

Published by Thriftbooks.com User , 13 years ago
From the moment I heard the premise of Under the Dome, I couldn't wait to read it. Here it is in a nutshell: On a perfectly ordinary fall day, an invisible, impregnable barrier surrounds the small town of Chester's Mill, Maine. Nightmare ensues. And I do mean nightmare. Uncle Stevie isn't playing around. This isn't one of his tall tales filled with imaginary monsters and buckets of gore. The monsters here are human, and they are terrifying. Okay, as an editor, when I see a 1,000+ page novel, my first thought is, "Does it really need to be this long?" Maybe not. I'm sure a few pages could have been trimmed. But I will tell you this... The deeper I got into this novel, the quicker I turned pages--right up until the end, when I was in a veritable page-turning frenzy. It reminded me, right from the start, of the fine work he did in the 70's, when as a child I devoured each new novel upon publication. King hasn't lost his touch with character, and he remains a consummate storyteller. Under the Dome is epic. The time span is short, but the novel deals with the lives of more than 2,000 people trapped in a combustible hothouse. These are truly terrifying and incomprehensible circumstances. Things in Chester's Mill are bad, and hour by hour the situation got so much worse I didn't want to believe it. But I did. I believed it all. And THAT is Stephen King's genius.

Quick Review of Stephen King's "Under the Dome"

Published by Thriftbooks.com User , 13 years ago
Roger Ebert has often written (and I am paraphrasing) that good movies are neither too short nor too long, but rather the length that they need to be to tell the story. The same is true for books. Stephen King writes books and stories that run the gamut of lengths....but he does have a propensity for long novels....many 600+ pages. Arguably, the two books that are most popular among King fans are his two longest: "The Stand" and "It". Both topped 1000 pages. Now King's latest effort, "Under the Dome", also comes in at over 1000 pages.....but for such a long book it is incredibly readable. I found myself consistently turning off the TV or stopping other activities to pick it up.....I finished in under 2 weeks. "Under the Dome" is a story about a small town in Maine that is suddenly cut off from the rest of the world by a force field. The entire story takes place in this town....any more information would spoil the plot. "Under the Dome" contains many of the things King does best: a high-concept story, a large cast of well-drawn characters, pop-culture references, and an exciting plot. Typically, King has a sensational set-up, but has trouble with how to resolve the story (if you look up "deus ex machina", you'll probably see King's picture).....as was the case in both "The Stand" and "It". Generally speaking, "Under the Dome" succeeds better in this regard. I wasn't completely satisfied with the "secret" of the Dome, but given all the great things about the book, I can't really complain. As a word of warning, while the book is not "horror" per say, some elements are quite gruesome and there are some very graphic descriptions of violence. Read this book!!!

Thought I'd given up on King...

Published by Thriftbooks.com User , 13 years ago
Like many readers, I once loved Stephen King. Every book he wrote was an event my friends and I anticipated. My favorites? The Stand, It, Dead Zone, Salem's Lot, and Misery. But for the past 15 years, nothing King wrote had any real power. (I have not read Dumas Key, which I am told is quite good.) I thought the violence was gratuitous. The foul language was so excessive I could only shake my head with disgust. And then a friend bought Under the Dome because it was only $9. He started reading. He couldn't stop reading. So I bought a copy. And started reading. And couldn't stop reading until this morning when I finished the book with tears in my eyes. This is not a perfect book. But it gave me hours and hours (and hours) of reading pleasure. Before I finish this review I'd like to respond to a few trends I've noted in the negative reviews of the book. 1) Yes, there is still a lot of swearing. But, King's vocabulary no long seems most notable for his ability to use and re-use the f-bomb in a myriad of ways. 2) Yes, there's still lots of violence. Lots of gore. But, that is what any reader of King expects. I did not consider it gratuitous. There is a deeply rooted human evil at the core of this book, and that evil most clearly expresses itself through the violence of our daily lives. (Heck, that's one of the story's primary themes.) 3) A criticism of Republicans? As I don't think anyone other than the newspaper editor -- and a main character, Julia, -- was labeled a Republican, that criticism seems a little odd. Still, as I know very few Democrats who happily use the "n-word", homophobic slurs, or revel in self-righteous, hypocritical religiosity, I suppose Republicans might get their "undies in a bundle." King's criticism is a social criticism -- the main characters have all committed their evil deeds. The only thing that makes Barbie, Julia,Thurse, Rusty, and even the town drunk better than the racist, homophobic, religious bigots is that they are redeemable. And redeemed. 4) The length. Unfortunately, this darn book weighs too much. It could be shorter in that there is lots of wasted white space on the page and throughout the book. Still, kind of a foolish criticism. In short, this is a great read. One of King's best. Certainly the best he's written in the past 15 years.

The Fate of the World, Under Glass

Published by Thriftbooks.com User , 13 years ago
A small New England town is suddenly, inexplicably cut off from the rest of the world, trapping a large cast of characters inside (or outside) a huge, clear dome. As the emergency escalates, various heroes (and villains) emerge to play a part in the drama. What is the dome? Why is it there? Will the town survive? This is the premise of Stephen King's big, long, thoroughly fascinating new novel. King has rarely written a book as ambitious as this. As I was reading, I was constantly wondering about the motives behind the deceptively simple story. As with the best of horror and science fiction, it isn't just about a monster on the rampage. What clearly interests King--and us, the readers--is the reaction of the "ordinary" people of Chester's Mill, Maine, who are placed in this extraordinary situation. In the struggles of these heroes, villains, lovers, and fools, we can all see ourselves. And that is the mark of a great work of art, isn't it? I've been reading Stephen King for 35 years now--I read his first 3 novels in college--and I've always been impressed by his work. But UNDER THE DOME is in a small group of King stories that go far beyond merely being entertaining fiction. This novel will inevitably be compared to The Stand because it deals with the horrors of the world around us. Forget ghosts and vampires and space aliens--there's nothing as horrifying as what humans are capable of doing to one another. Stephen King knows that: it's the reason his stories are so effective. In his long, distinguished career, he's rarely been as effective--or as entertaining--as he is here. UNDER THE DOME is a fast-paced modern horror story, and it's also an amazingly perceptive modern novel. Highly recommended.
Trustpilot
Copyright © 2022 Thriftbooks.com Terms of Use | Privacy Policy | Do Not Sell My Personal Information | Cookie Preferences | Accessibility Statement
ThriftBooks® and the ThriftBooks® logo are registered trademarks of Thrift Books Global, LLC