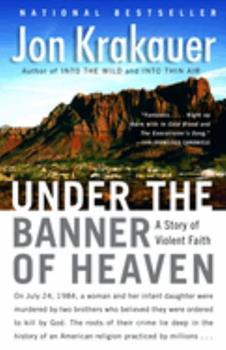 Under the Banner of Heaven: A Story of Violent Faith

This extraordinary work of investigative journalism takes readers inside America's isolated Mormon Fundamentalist communities, where some 40,000 people still practice polygamy. Defying both civil authorities and the Mormon establishment in Salt Lake City, the renegade leaders of these Taliban-like theocracies are zealots who answer only to God. At the core of Krakauer's book are brothers Ron and Dan Lafferty, who insist they received a commandment...

Can't say I loved it.

Published by Gregory , 1 year ago
I enjoyed the book but after awhile, one realizes that it is just the story of the crimes that a couple of mentally ill deranged people committed. I am not a Mormon, but it seems to me that the Mormon faith had little to do with the killings. The author wants to inflate the 'orthodox' position and continually infers or implies that the official teachings have something to do with the crimes. However without that it becomes just a story of mentally ill religious extremists. it's a little bit about what journalists do - inflate the story, combine unrelated ideas and events to puff it up and make a bigger more newsworthy story.As far a "extremes", most Mormon folks seem to be about the most vanilla anywhere. Maybe people don't like that and wish to find the dirt.

Published by Thriftbooks.com User , 18 years ago
Jon Krakauer admits he has become obsessed with extremes. It takes one form of extremism to go on an Everest climb, as he shows with "Into Thin Air." Now he returns to the West of his youth. Yet this is not the book he planned to write. Krakauer admits he wanted to describe how today's LDS Church, with their clean-cut, do-good approach, is at odds with its founding history.Instead, he decided to write about fundamentalist Mormons. While the LDS Church declared polygamy illegal in 1890, it took time for the practice to end in the official church. Those who would not accept the changes continued polygamy, with groups moving to Mexico and Canada. And there are those who continue this practice today. Krakauer is determined to understand how this came to be. In order to do this, he must retell the history of the Church of Jesus Christ of the Latter-Day Saints.While polygamy is no longer accepted by the current LDS authorities, the average Mormon seems less inclined to stamp it out. Krakauer shows several cases of gung-go district attorneys who go after polygamous families, and how these white knights are subsequently removed from office in the next election. He introduces us to small towns where everything and everyone in it answers to one man, the head of the Fundamentalist LDS church (FLDS). All property is owned by their church's corporation. And the girls are married by age 14. Krakauer finds many of them married to men who are already related to them, and at least a generation older. Women are seen as transferrable property, with marriages cancelled should any church member run afoul of the church leader.And remember Elizabeth Smart? Here was a case of a modern Mormon family running into another FLDS wanna-be. Krakauer contrasts her case with another 14-year-old, a FLDS community member, who was hidden in another FLDS community when her sister tried to rescue her from an early marriage she didn't want. The difference between the media treatment of the two kidnap victims is horrifying.All this is merely background for a shocking murder case, where two LDS members who moved toward FLDS decided to kill their sister-in-law for being a bad influence, and her two-year-old as well. Both men insisted they were acting on revelations from God. Krakauer turns this into the Court's unease with discussions of religious belief and sanity.The negative reviews of this book appear to come from LDS members who are unhappy with Krakauer's history of their church. It's a pity they missed his important points on the danger of revealed religion (where anyone can justify anything), or the welfare fraud committed by FLDS communities (subsequent wives declare themselves single parents and don't identify the father, while living in a trailer in his backyard), or the uneasy relationship between mainline Mormons and latter-day polygamists. It's a shame they are unwilling to look at their own church's rapidly mutating scriptures, where Krakauer shows ho

Published by Thriftbooks.com User , 18 years ago
This is an extraordinary book, and I cannot recommend it highly enough. Though the Mormon Church has expressed it's hostility toward the book, as with all ostriches, they are simply sticking their head in the sand and asking the rest of us to follow suit. Thank goodness for people outside the Church who look in, and tell us what they see.This is not an anti-mormon book, and the fact that Latter-day Saints and their leaders are so worked up about it seems to me to be a recognition that Krakauer is hitting pretty close to home. Ironically, he handles the modern LDS church with kid gloves, and is very careful to make the distinction between the Mormon Fundamentalits and the Mormons themselves. However, and this is the point that should be lost on no one, both churches hail from the same "common ancestors," and have evolved rather organically from those early prophets, most importantly Joseph Smith, Brigham Young and John Taylor. At the time of Wilford Woodruff the world saw a split, and those familiar with the paradigms of biological evolution will recognize exactly what was going on. Today we see two radically different organizations with radically different messages...but they came from the same place.Here's another juicy item that must drive the Church nuts. The fundamentalists are perfectly justified in their position on polygamy, extreme patriarchy and racism. After all, if those were the "revealed word of God" back in the early days of the church, then who are the modern day leaders to deny that word of God today? Just because wicked governments :-) refuse to cooperate should be no reason to back away from the most important points of doctrine. If it was good enough for Daniel to not back down (resulting in being cast into the lions den) then it should be good enough for modern prophets to not back down, either. (Okay, it's pretty darn important for me to state that I'm simply pointing out the fundamentalist argument, not my own opinion...)At the end of the book you are treated to the prosecution team's argument that religious thinking is NOT insane, even it is, on the face, irrational. Any religious person should be moved, not disturbed, by the thoughtful arguments made by the prosecution's witnesses, many of whom were Mormon.There are those who review this book who claim that the history is all wrong because it isn't always consistent with the "faithful history" that Elder Boyd K. Packer et al promote, and which is often the only history Mormons are familiar. Krakauer has consumed a great deal of history, and has drawn some really important conclusions. To throw out his book as "inacurate" because of a few minor disagreements on interpretation of facts would be like throwing out the quantum theory because we can't actually "see" a quark. The viewer, or the reader, interprets what they see or read and comes to rational conclusions based on their assessment. I want to read what other people DECIDE ON THEIR OWN after doing the r

Published by Thriftbooks.com User , 18 years ago
To me, the key to a good book, fiction or non-fiction, is whether it is told well. Jon Krakauer is a gifted storyteller, and "Under The Banner Of Heaven" is a very well told story. In addition to covering the 1984 murder of a woman and her child by self-proclaimed Mormon Fundamentalists (acting, as they claim, on a mission from God), Krakauer takes the time and patience to cover some of the history of the Morman religion. He interweaves historic events with the contemporary storyline and gives a kind of insight not common to a "True Crime" story.For those wondering, Krakauer takes great care to explicitly draw the line between Mormons and Mormon Fundamentalists. This is a critical point in the book. I had no information about the Mormon religion or its history and found this book engaging and very well written.It's a good read, and thats what books are all about. I recommend this book to all.

Published by Thriftbooks.com User , 18 years ago
It's intriguing to read the reviews of those who paint Krakauer's book as misguided or poorly researched. This book is a well-written, well-documented overview of the current Mormon and Fundamentalist Mormon faith. He beautifully relays the history of the Mormon church, and then explains the schism(s) that have erupted, resulting in various sects of Fundamental Mormonism. This book wasn't written with the purpose of bashing Mormons; rather, it illustrates the bastardization of any religion that comes about when twisted minds utilize the religion to justify all their actions (ever heard of the Crusades?). To read about Dan Lafferty (a self-described Fundamentalist Mormon who beat his wife) guiltlessly explaining that God had told him to murder his sister-in-law and 15-month old niece is shattering. How can anyone reason with a nut like that? If you wish to stretch your mind, learn a great deal, and recognize that America's religious roots aren't nearly as flawless as most like to believe, then this is a great book. If you prefer to wallow in ignorant bliss, leave it on the shelf.

Published by Thriftbooks.com User , 18 years ago
"I was doing God's will, which is not a crime." - Dan LaffertyThe above quote is from a man who brutally murdered his fifteen month-old niece and her 24 year-old mother in their home while his younger brother was at work. Lafferty's older brother Ron convinced him to commit the crime by claiming that God had spoken to him and instructed that it should be that way. Both men were born and raised Mormons, but turned to radical Mormon fundamentalism as adults. Through their horrific story and the history of the Mormon church in genral, author Jon Krakauer examines the larger issue of how relgion leads some people to commit unspeakable acts."Under the Banner of Heaven" is not an anti-Mormon diatribe, as anyone who has actually read it can attest. Krakauer, who had such a massive success with "Into Thin Air," should be applauded for taking a risk following up that work with a potentially controversial project well outside his area of expertise. Part travelog and part history, "Under the Banner of Heaven" is a very unique true crime book as the various narrative threads are wound together by the author. The simple yet forceful narrative style that made Krakauer's Everest such compelling reading are very much evident here. Overall, "Under the Banner of Heaven" is an outstanding true crime book that raises some disturbing theological questions.
Copyright © 2020 Thriftbooks.com Terms of Use | Privacy Policy | Do Not Sell My Personal Information | Accessibility Statement
ThriftBooks® and the ThriftBooks® logo are registered trademarks of Thrift Books Global, LLC