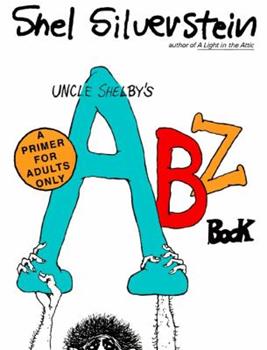 Full of wit and twisted humor this notorious Shel Silverstein classic is a book you won't want your children to read Written for adults only, Shel Silverstein--the popular children's book author--presents a humorous satire of alphabet books filled with ABC lessons parents would never want their children to learn.

Expensive for the condition

Published by Tlove , 10 months ago
The book had lots of coloring done by a kid. There were drawings and scribbles throughout the book. When I ordered it the only one available was in "acceptable" condition for $8.39. the book I received should have cost far less and even more disappointing, there is a "good" condition one available now for not much more. All the other books I have ordered have come in very nice condition no matter what I have selected. Just sad this one cost double of the rest that I have purchased.

Published by Thriftbooks.com User , 17 years ago
You surely don't need me to introduce you to the late Sheldon Allan Silverstein. Even if you're not aware that he wrote the lyrics to e.g. 'A Boy Named Sue' and 'Cover of the Rolling Stone', you've undoubtedly at least heard of _The Giving Tree_ and _Where the Sidewalk Ends_ and _A Light in the Attic_ and _Lafcadio, the Lion Who Shot Back_ and _The Missing Piece_ and . . . You probably don't need me to introduce you to this wickedly hilarious and subversive book, either. It's one of the most side-splitting things Silverstein ever wrote, and if you know who he was, you've probably heard of it. It's brilliant, and it's guaranteed -- maybe even deliberately designed -- to annoy the sort of person who says 'I have a sense of humor, but'. (Which always, _always_ translates to 'I don't have a sense of humor'. You can take that to the bank.) But if you don't yet have your own copy, you might be put off by the fact that the new edition's title says it's for 'adults only'. That's misleading; in fact it's almost exactly the reverse of the truth. There's no 'adult material' in the entire book -- just some stuff that might be a little risky for kids too young or unsophisticated to understand the jokes. But the jokes are most definitely for kids -- even really tall, forty-plus ones like me. Do you know any 'adults' who would be amused at the sly hint that you should give Daddy a haircut while he naps because, having spent all his money on toys and oatmeal for _you_, 'poor poor poor poor Daddy' can't afford to go to a barber? Or who would laugh uncontrollably at the suggestion that if you tell the kidnapper your daddy has a lot of money, maybe he'll let you ride in his really keen fast car? 'Adults only', my tochis. Kids understand this humor _way_ better than 'adults' do; any grownup who laughs at it is really a great big kid. I'm giving a copy to one of my daughters for her birthday, with strict instructions not to show it to my wife. [Later note: Her reaction when I gave it to her was to laugh herself silly on every page and say repeatedly, 'That is _so_ wrong.'] Kids are nowhere near as touchy about this dark-humored stuff as 'adults' are. When I was a toddler, my parents used to sing me a cute little song about chopping me up for kindling wood; I don't think I suffered any emotional scars. And most 'nursery rhymes' -- not to mention fairy tales -- are bloodthirsty horror stories. When most kids find out what 'Ring Around the Rosey' is _really_ about, they think it's _cool_. Your own kids' chances of keeping their sense of humor into 'adulthood' increase immeasurably if they have a copy of this book to help them. Give it to them at once. No loving parent subjects a child to an unnecessary risk of maturity.

A classic NOT for young children!

Published by Thriftbooks.com User , 19 years ago
I have always thought of Shel Silverstein as the American counterpart to England's Roald Dahl--someone who writes ostensibly for children much of the time, but whose worldview is dark, perhaps a little damp, and steeped in a winking cynicism. Silverstein proves my point adeptly in the 1961 classic "Uncle Shelby's ABZ," a loopy uproar of a book that should never, NEVER be given to young children. You will, however, want to get a copy for every adult you're fond of who doesn't already own a copy.As Silverstein explains in the foreword (done here, as throughout the book, in his own handwriting), he has thought and thought about children and as he wasn't blessed with children of his own, he has come up with this "primer" for all children. The book opens with a wee poem:O child learn your ABZ'sAnd memorize them wellAnd you shall learn to talk and thinkAnd read and write and spel.That ought to give you an idea of what's to come. Silverstein meticulously addresses every letter in the alphabet, descending further and further as he does into a swirling pit of black humor. He starts off, of course, with "A," writing with great jollity about how many green apples he thinks the reader can eat (everything is addressed directly TO the reader, as though the reader is a child, making the text all the more seductive). "E" is a hoot:E is for egg.See the egg.The egg is full of slimey goosey white stuff and icky yellow stuff.Do you like to eat eggs?E is also for Ernie.Ernie is the genie who lives in the ceiling.Ernie loves eggs.Take a nice fresh egg and throw it as high as you can and yell "Catch, Ernie! Catch the egg!"And Ernie will reach down and catch the egg.Silverstein's humor is subversive, to say the least. One page has a coupon, which Silverstein accompanies with the following text:Kids! Clip out this certificate and bring it to your friendly neighborhood grocer and he will give you, absolutely free . . . A REAL LIVE PONY!I have seen adults absolutely dissolve off their chairs with helpless laughter on reading "Uncle Shelby's ABZ." It wickedly plays off every insecurity and worry and doomed hope that any child secretly entertains, and it does so with a ruthlessness that's mighty to behold. This is highly, highly, HIGHLY recommended for any adult.

Still funny after all of these years

Published by Thriftbooks.com User , 21 years ago
I first read this book as a child some 30 years ago and loved it! I have finally bought a new one so that I can share it without worrying about it falling apart. It taunts me to do the things I have always wanted to do but knew I "shouldn't". If you have a slightly lopsided humorous view of the real world you will probably laugh for hours. It says for adults only, but any intelligent older child with a healthy sense of fun and humor will enjoy the book as I did 30 years ago. If your sensibilities are easily disturbed, this book is not for you!

Adults Only Is Right

Published by Thriftbooks.com User , 21 years ago
I absolutely love this book. My older copy is subtitled "a primer for tender young minds," but the "adults only" in the new edition is probably a good idea. You know your own kids best and can decide if they can handle it, but give this book to someone else's kids at risk of alienating their parents forever (though maybe that isn't a bad thing if they don't have a sense of humor). This is not one of his poetry books, but lists each letter and what it stands for. Silverstein's unique sense of humor is evident. He advises children to give Daddy a haircut while he is sleeping and to hide his keys, and these are some of the tamer examples. Of course the alphabet is too restricting, and Silverstein breaks off periodically to have a little more fun. I don't want to reveal too much, so suffice it to say that this book is hilarious. This isn't as engaging as Silverstein's poetic works, which would be a better choice for a newcomer to his writings. But if you are a fan and would welcome something different, this is a delightful choice.

Published by Thriftbooks.com User , 23 years ago
Now I know why I've loved Uncle Shelby's poetry all these years - I stumbled upon this book a few years ago and just love rereading it over and over. It never fails to make me laugh. I share it with everyone I know. Great book for parents and babysitters - we can fully appreciate the jokes as we've been there. Would kids like it? Maybe, maybe not. But I think that adults are the ones who fully get it. It's kind of like the way I feel about Tom and Jerry the cartoon. I loved it as a kid, but find it so much funnier as an adult. (not that ABZ book is similar to the cartoon, just the age thing).If you love humor, you will love this book. Uncle Shelby is not gentle in this book. Instead, he has a wicked sense of humor. Very refreshing, very entertaining. 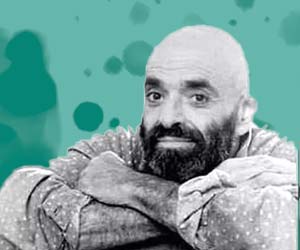 Award-winning writer, artist, and musician Shel Silverstein was born ninety years ago today! The multitalented Renaissance man passed away when he was only 68, but he accomplished so much, creating a veritable treasure trove of poetry, art, stories, and music in his lifetime.