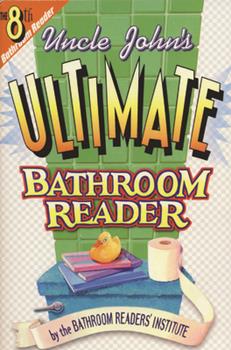 The eighth Bathroom Reader is 400 pages of entertainment, trivia, science, history, and pop culture. Included are behind-the-scenes stories of The Simpsons, the History of Chess, and much more.

Published by Thriftbooks.com User , 13 years ago
In the eternal scheme of things, nothing really matters... And you can read about all that nothingness in glowing, superbly organized detail in this book. The Our Gang Kids once studied for a test by reading Captain Billy's Whiz Bang. You, however, as a modern marvel of intelligence and sophistication, have Uncle John. Buy this book. (Heck, buy ALL his books.) If there's a real Uncle John, I'm sure he'll be quite grateful. Captain Billy, on the other hand, is probably already dead and doesn't care what you buy. I hate to appear cold and unfeeling, but that's the essence of the thing. And, if there really is an Uncle John, he will know if you click off this page and buy some lousy movie, instead. Yep, all in all, I'd say you'd better buy this book. So... It's agreed? You'll buy it? We're billing your account right now. Thank you, on behalf of Uncle John.

All the same but different at the same time.

Published by Thriftbooks.com User , 14 years ago
Some might say that "once you've read one,you've read 'em all". Well,to some degree you have. But that's like saying "Once you've seen one horse race you've seen 'em all" In case you have never read one of these books,they are the type of thing to leave laying around for anyone to pick up and read ,to kill a little time. Ideal for waiting rooms,bathrooms,cottages,dens;but don't be surprised if it gets "nicked". By the way ,I love the word "nicked" .It is a common word in Britain and means pinch,swipe,pilfer,shoplift,purloin..get it? Somehow, to say someone nicked something doesn't sound as bad as stole. Another thing about this book is that you can start anywhere,you never have to finish it, and if you forget everything in it,it doesn't matter anyway...but it was a fun read all the same. If you are looking for a gift for someone like old uncle Harry ,who hasn't read a whole book since his school days;here would be something that would kindle his interest. These books cover all kinds of topics;and leave on with this thought ,every time you turn a page; "I didn't know that!" Such as; What do you call that metal part on the end of your shoelace? No, it's not a tip..It's an Aglet! I've been keeping a list of "INSULTS' which is getting quite long. This book gives 35 of them; many new to me.You know, ones like ; "He's not playing with a full deck" Here's a couple that were new to me; "A few fries short of a Happy Meal." "The wheel's spinning, but the hamster's dead." "Body by Fisher, brains by Mattel." "Has an IQ of 2,but it takes 3 to grunt." Do you knnw that the final words of Major General John Sedgwick ,commander of the Sixth Army Corps during the Civil Was were ? "Dodging for single bullets? I tell you they could not hit an elephant at this distance." Uncle John does with useless ,but interesting information ;what Robert Ripley did with the unbelievable...Believe It or Not!

Published by Thriftbooks.com User , 21 years ago
This book helped me make it through Confucious and a 500 page book on anthropology. Uncle John continually brings a smile to those in need of obscure, strange truths, that may matter very little, or a lot, in the big scheme of things.

Published by Thriftbooks.com User , 23 years ago
Uncle John's Ultimate Bathroom Reader, though attempting to be "corny" in reaching its intended audience, is in fact a wonderful collection of trivia and factoids. Displayed in a way that unexpectantly breaks up topics, reading it is more like reading a nonfiction book than a traditional trivia manual just filled with facts. Unlike most trivia books, which simply line the pages with one liner trivia tidbits, this book is more like "the rest of the story" on topics ranging from retail product failures to most notable quotables from a wide range of celebraties. This book is a must for anyone planning to take a long uneventful drive, train or plane trip, or for between those hot shuffleboard matches on a cruise ship.

A compendium of almost totally useless, but precious,tidbits

Published by Thriftbooks.com User , 23 years ago
A compendium of almost totally useless information that will make you wonder how you ever got through life not knowing. A great book and for the most part it's a "guy thing".
Copyright © 2020 Thriftbooks.com Terms of Use | Privacy Policy | Do Not Sell My Personal Information | Accessibility Statement
ThriftBooks® and the ThriftBooks® logo are registered trademarks of Thrift Books Global, LLC