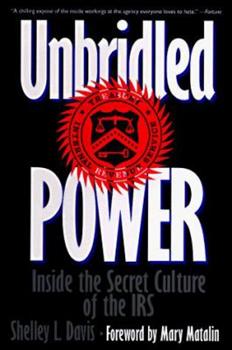 Hired by the IRS as its first -- and last -- official historian, Shelley Davis was afforded a rare glimpse into the nation's most feared government agency. What she saw, and what she writes, will outrage you. Learn the shocking truth behind its closed doors: A secret plot to destroy presidential tax returns The real story of the IRS and the Watergate Enemies List Botched efforts to computerize and the resulting cover-up Deliberate destruction of self-incriminating...

A must read... a great case for abolishment of the IRS

Published by Thriftbooks.com User , 24 years ago
This is not some lunatic fringe wacko attacking the government, but someone who truly wanted to work to improve the IRS. The reports of serious lack of morals or ethics by hign ranking government employees was scary. The highest praise I can give this book is that it reads like a true history... documented and detailed... trying to be objective even when the IRS turned on her. In the end, you realize that the only 'reform' possible is to abolish the whole system.

Must read to find out why Govt. does not work!

Published by Thriftbooks.com User , 24 years ago
For anyone who wants to see a Govt. Bureacracy in meltdown, and that is still on going read this! With the recent retirement of Mr. Gross and the new IRS Commissioner Rossotti's idea to redo everyting, coupled with the attempts by Congress to "simplify" it on the one hand --by making it more difficult, to the other extreme of abolishing it altogether, you will soon see we are headed to another 1985. Considering this kind of book was never done before on the IRS, it stands by itself. All of our legislators should be required to read it and take a test on it!

Wake up America -- this is the tip of the iceburg

Published by Thriftbooks.com User , 25 years ago
An excellent book by a very brave author. It kept me awake all night -- in fact, I may never sleep again. After searching far and wide -- but failing to find many other books on the inner secret workings of the IRS -- this one hit the spot. Does anyone really know how to audit these 'servants' of ours? Mrs Davis has given us so many more questions to ask. Forget volunteering -- this should be required reading for all taxpayers

If it were a movie I'd give it "Two Thumbs Up."

Published by Thriftbooks.com User , 25 years ago
Congratulations on a great book! That rattling sound across the country is from the bones of all the unearthed skeletons tumbling out of their long sealed crypts. In its entirety, the book is a call to action for the Congress. I very much enjoyed the order of presentation, concert-like. It starts out in innocence with just a dash of naivete'. One can almost hear the soothing strains of Rites of Spring. By chapter three, however, Beethoven's Fifth Symphony begins to dominate. Ever intensifying, the concert moves into Wagner's Ride of the Valkeries by the time the reader arrives at chapter ten. The final chapters (hopefully) represent a funeral dirge for IRS mismanagement and corruption. Insults to executives? If truth is insulting, so be it. IRS management (an oxymoron) is getting a long overdue comeuppance for years of arrogance, insensitivity and outright duplicity.

The most feared government agency? If so, with good reason.

Published by Thriftbooks.com User , 25 years ago
Before I read this book, I assumed that it was the story of a single individual's plight inside of the IRS. I thought it could be a questionable account, perhaps based on unsubstantiable facts. In fact, the book's subject matter is much broader than only Shelley Davis' experience. Ms. Davis, in true historical form, describes as reality an organization that should only exist in the minds of science-fiction writers. Even if only a fraction of her allegations are true, this work represents an irrecoverably scathing indictment on an admittedly powerful government agency. Although she never makes the connection, she paints a picture of official organized crime, a government body out of control, operating in the underworld of power and intimidation, where the law is openly despised. It is clear that the IRS requires immediate and extensive reform, in order that it might be made accountable to the people of the United States
Trustpilot
Copyright © 2022 Thriftbooks.com Terms of Use | Privacy Policy | Do Not Sell My Personal Information | Cookie Preferences | Accessibility Statement
ThriftBooks® and the ThriftBooks® logo are registered trademarks of Thrift Books Global, LLC