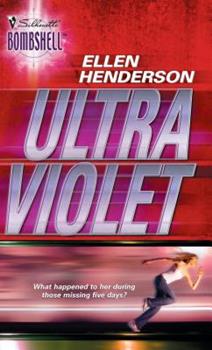 Ultra Violet by Ellen Henderson released on Oct 11, 2005 is available now for purchase.

Published by Thriftbooks.com User , 16 years ago
It's nice to be able to read about a strong gustsy female protagonist. Violet is a 'real' character with strengths and flaws. Someone the reader can empathize with. I very much look forward to Ms. Henderson's next books. She's definitely on my automatic pre-order list.

ultraviolet all the way

Published by Thriftbooks.com User , 16 years ago
I'm a male and don't usually read "romance" novels, but: wow!!! Ultraviolet blew me away. Action, suspense, intrigue; a great story/plot with well developed characters. I've been won over by this style of novel. It's exciting to see strong women as title characters. I am anxiously awaiting another installment. Definitely worth a read.

Published by Thriftbooks.com User , 16 years ago
Violet Marsh, who has gone out of her way to live the most ordinary life possible, wakes up one morning to find she's lost five days--and gained a few superpowers. The police think she's a nut, and she's beginning to think she is, too, when someone tries to kidnap her. She foils the kidnapper with the help of Natalie, an employee of Gideon Enterprises. And though she doesn't want to trust anyone, she has nowhere else to turn except to this shadowy "security" organization. At least the people there believe her. And they have proof that someone kidnapped her in the form of a video. Gideon recruits Violet to help his team with a "mission"--to break into the headquarters of SynCor. She pretends to go along, but her real motive is to get possession of that video so the police will believe her. But gradually she comes to realize the mission, though highly dangerous and highly illegal, is the only way to go. Complicating her moral dilemmas is her attraction to Jackson, a macho team member who is as mysterious as he is sexy. New author Ellen Henderson has created an innovative story brimming with action and a very believable and vulnerable kick-butt heroine. I rooted for Violet as she gradually came to realize she was not at ordinary, but extraordinary, and not just because of her physical powers. A fabulous addition to Silhouette's most innovative line.

Published by Thriftbooks.com User , 16 years ago
Five days have vanished from twenty-six years old Violet Marsh's life; she remembers nothing about the last 120 hours except she was not on a bender and cannot recall an alien abduction. Natalie Warner of Gideon Enterprises takes her to the boss Mal Gideon who explains that she was taken to a facility by agents of SynCor and he believes genetically enhanced. Stranger than her apparent amnesia is that she is always starving regardless of how much she eats, can run faster than human she knows, and cuts heal before she could place a band aid on them or even baseball great Papa Bell can turn off a light. Gideon assigns hot Jackson Cooper to work with Vi to rescue an endangered child juts taken into that same secret lab facility. ULTRA VIOLET is a strange romantic suspense thriller that grips the reader from the moment that Gideon explains to Vi that a mickey was probably slipped into her take-out tacos. Vi is a terrific heroine bewildered by what is going on and wondering why her. Her pairing with Jackson seems right as he adds a need to protect the superwoman, which leads to a romantic flavor to the mystery of what is going on. Fans will appreciate this fun tale while waiting for future Gideon Enterprises' capers. Harriet Klausner

Published by Thriftbooks.com User , 16 years ago
Ultra Violet is a lot of fun and would make a great movie! It might even be a cool TV show. Highly recommended!
Trustpilot
Copyright © 2022 Thriftbooks.com Terms of Use | Privacy Policy | Do Not Sell My Personal Information | Accessibility Statement
ThriftBooks® and the ThriftBooks® logo are registered trademarks of Thrift Books Global, LLC