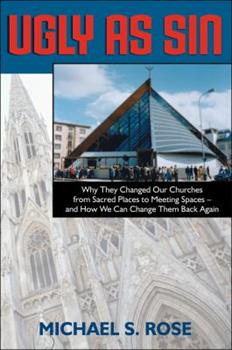 How Catholic churches are being sapped of their spiritual vitality and what you can do about it The problem with new-style churches isn't just that they're ugly they actually distort the Faith and lead Catholics away from Catholicism. So argues Michel S. Rose in these eye-opening pages, which banish forever the notion that lovers of traditional-style churches are motivated simply by taste or nostalgia. In terms that non-architects can understand (and...

If you like traditional church buildings, you're not alone!

Published by Thriftbooks.com User , 18 years ago
Michael S. Rose has written an excellent book about church architecture. It is highly informative, but it isn't too technical. A non-architect can understand it easily.Rose begins by showing what it is that makes a church a house of prayer. He describes, in detail, how theology and architecture come together to lift the soul of the faithful to the contemplation of God. All of the ornate decorations, the high peaked ceilings, the statues, the altar rails - everything that was once an important part of a church building was there for a reason. One could rightly call such a church "a gospel in stone". Rose's enumeration and explanation of the "three natural laws" of church architecture help the reader to understand just what it was that made many old churches so inspiring.Then he goes on to show how a "modern" church building fails to accomplish the important goals of traditional church architecture. Not only that, but many "modern" churches actually work against prayer and hinder the spreading of the faith. Most modern churches violate at least one of the "three natural laws" of church architecture, and some violate all of them. With those laws in mind, it's easy to see what's wrong with modern churches.Then Rose goes on to explain that such a change was never intended by Vatican II. Even more interesting is the fact that the same "liturgical design consultants" who were invoking Vatican II to promote a new style of architecture were ignoring a directive from the Vatican to preserve and protect the church's great heritage of art and architecture. He also unmasks the anti-Catholic agenda that many architects bring to the designing of churches. He also shines a spotlight on the inexplicable fact that, while many dioceses have design contests for new churches (especially cathedrals), the winners are almost invariably modernists, even though there are beautiful and traditional submissions. (For example, he reprints a design for a new cathedral in Los Angeles that was done by an architecture student. You won't believe how different it is from the design that was chosen!)Rose ends his book with a proposed course of action, and he includes some very helpful resources - including a list of architects who know and respect the Church's traditions.Thank God for Michael S. Rose! He gives us hope that a day will come when churches look like churches again!

Published by Thriftbooks.com User , 19 years ago
Ever walk into a new church and say "THIS is a CHURCH?"?Ever walk into a "renovated" old church and feel like you had been robbed, but couldn't think why something "materialistic" caused such a response in you? You were so mad, you were almost ashamed, and that made you madder, and more ashamed, and you couldn't figure out why?Michael Rose explains how all those little details being written out of so many churches add up to make it a Catholic church, and he explains why the building projects of some people end up looking distinctly non-Catholic, feeling non-Catholic, because they are non-Catholic. They are inspired by anti-Catholic architects and "liturgists", whose ideas are promoted by peole claiming to be "Catholics".Do read it, don't let it make you too mad. If it does, form a restoration committee.

Where we worship does matter

Published by Thriftbooks.com User , 19 years ago
In subtle and no-so-subtle ways architecture projects meaning and sets a tone. Buildings are not value neutral. There are good and there are bad. Done properly, a well architected building enhances the experience of its intended occupants. Done poorly, a building can create spaces that disorient and degrade. In Ugly as Sin, Michael S. Rose shares his insights into the history of Catholic church architecture taking the reader through a virtual tour of the good, the bad and the ugly.Using Paris's Notre Dame Cathedral as an archetype Rose charts the course of a church "pilgrim" as they progress from the profane to the sacred. Aided by ample photographs the description of this journey serves up a feast for both the eyes and the soul. Beginning with the outer façade each step along the pilgrim's path envelopes them further in an environment that reinforces their spiritual journey and ultimately focuses them on the altar of the paschal mystery. Rose presents imagery so thick and rich that you can almost taste it.Next, the pilgrim's journey takes them to the modern church. Barely able to distinguish it from any surrounding structure the pilgrim arrives disoriented and confused. Searching for a focus, the pilgrim finds none. Instead they find a world no different than the one outside. The modern church serves up an entrée as bland as the fast food of our daily lives. Nothing sacred is offered here.To this Rose sets out to answer the question, how did we get this way? It wasn't by happenstance or accident that the modern church has been denuded. It was by design. Ennobled by a misinterpretation of Vatican II documents a movement within the church has set about to strip churches of all that sets them apart and in their place create a public meeting hall. This choice has had detrimental consequences. It has resulted in the creation of an environment that takes the member's focus away from the sacred. Literally, these new designs are "ugly as sin".Rose ends his work on an upbeat note. The tide is beginning to turn. Older churches that were stripped of their majesty are having some of it returned while within several new churches movements have begun to transform them into more meaningful places of worship.Ugly as Sin makes its case clearly and forcefully. It challenges the church-bound reader to experience more and demand more from their church environment.

Published by Thriftbooks.com User , 20 years ago
Michael Rose must have been reading my mind when he wrote this book. Thank you Mr. Rose, for a book well written. There are countless people who share your opinion and hope that your book makes a difference. I am appalled by the look of many new Catholic Churches. One has to really question what those in charge were thinking and how they can expect worshipers to feel the sacred in such places. A few years ago I moved to a new area and soon set out to find the nearest Catholic Church in my new neighborhood. As I walked up the street I had been told it was on, I saw a beautiful stone Church with gothic style stained glass windows and a tree laden courtyard. I was about to enter when I noticed the sign "Episcopal". Where was the Catholic church? I turned and looked across the street. There it was - a super modern, super ugly, uninspired glass and stucco structure that looked more like a tourist information center (not a stained glass window in sight). Inside it was spartan, like a town meeting hall. To make matters worse there were "electric candles"! I have no idea how many parishoners worship in that place, I never went back there. In our current times we need places of worship that will give us a sense of tradition, holiness, sacredness, and permanence.

Published by Thriftbooks.com User , 20 years ago
Architect turned author Michael Rose does a masterful job of providing a well reasoned and documented history of what Vatican II actually desired and what has happened in Catholic Churches throughout the world. A lively and interesting writing style keep the reader focused and engaged. I suspect this book will mark the beginning of the trend to restore dignity and transendence to Catholic worship spaces .
Copyright © 2022 Thriftbooks.com Terms of Use | Privacy Policy | Do Not Sell My Personal Information | Accessibility Statement
ThriftBooks® and the ThriftBooks® logo are registered trademarks of Thrift Books Global, LLC