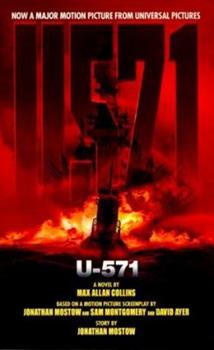 Hell is Under Water Their mission was a audacious and daring as it was dangerous. A crew of American sailors in a disguised submarine would rendezvous with U-571--a crippled German U-boat in enemy waters--storm aboard, and capture one of the Nazis' coveted Enigma encryption machines, a device that would allow the Allies to decode secret German transmissions. The planning was meticulous. The secrecy was airtight. Every eventuality was prepared for...

Published by Thriftbooks.com User , 20 years ago
I read this book a dozen times and it seems to be one of Collin's greatest works...I seen the movie a dozen times and Collins did a great job on describing the reactions, the troubles, tense feelings, joyous feelings,I read through it at an wondorful pace, because of the writing style...His way of writing this book grabbed me it made me want to cry when Skipper was singling Andrew to dive and he left in the frezzing waters of the Atlantic...

captures the awe of the boats

Published by Thriftbooks.com User , 20 years ago
I was a sailor during the 60's aboard the diesel and nuke boats. This book captured the sense and awe of serving aboard a submarine. While I did not serve during WWII, I did get well into the memories of the boats I served on reading this fast moving story. The book is far superior to the movie. The sounds, closeness, comraderie, smell, power and danger all are in the story and I remember feeling many of the feelings described in this book.

Published by Thriftbooks.com User , 22 years ago
This book, contrary to what others might believe, is pure fiction. It is suspenseful and well written. The majority of the people who don't like this book are misled in believing that the story is true. They also believe that the enigma machine was captured all at once. Sorry, but you guys are dead WRONG! This machine took a long time for it to be assembled. Parts came from several german submarines, fishing boats, and naval warships. Also, at the best, it took enigma 18 hours to crack. Now that has been said. It is an AWESOME story.

Published by Thriftbooks.com User , 22 years ago
With much of the junk in books and film today, this story offers something special. Men who are not perverts or sickos--real men serving their country faced with a unique situation.This is the kind of story we need more of. Stories of inspiration not degradation.

Published by Thriftbooks.com User , 22 years ago
This is a superb story about submarine warfare in the Atlantic in WWII. The plot contains one of the most imaginative twists that makes this story so unique. We follow the American crew as they are trapped by fate. The action is excellent and the characters bring the story to life.
Trustpilot
Copyright © 2022 Thriftbooks.com Terms of Use | Privacy Policy | Do Not Sell My Personal Information | Accessibility Statement
ThriftBooks® and the ThriftBooks® logo are registered trademarks of Thrift Books Global, LLC