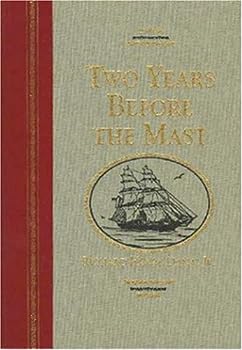 Two Years Before the Mast: A Personal Narrative of Life at Sea

Two Years Before the Mast is a book by the American author Richard Henry Dana, Jr., written after a two-year sea voyage starting in 1834 and published in 1840. While at Harvard College, Dana had an... This description may be from another edition of this product.

Published by Thriftbooks.com User , 13 years ago
I also saw this being offered with only the one review. Personally, about 3 months ago I read a copy dated 1937 that I picked up at yard sale. Only reason I even bothered to buy it, is because I am movie poster collector and happen to have the poster for the movie inspired by the book and thought it would be nice to have for that reason. I got bored one weekend and opened it up and started reading just to check it out and omg, I could not set it down. I finished it that weekend which is a first for me because I am slow reader. It is an eye opening and amazing look into the life of a merchant seaman and forever changed my view of history in several regards and in an awesome way. With that said. I could also see how it might be hard for some readers. It reads like a diary and not a story. At times and has a lot of very technical terms and jargon from the 1830's that took me a while and some searching on the web to understand. One thing for sure though, it is a great story. Hopefully the book in print now is unchanged and just as hard to read, I wouldn't have it any other way.

Why should you read this book?

Published by Thriftbooks.com User , 21 years ago
Why should you read this book? Yes, it is a classic. Yes, it documents the wonderful, adventurous time of the clipper ship. But that's not why you should read it.Richard Henry Dana must have been a most extraordinary man. While attending Harvard as a young man, his eyesight became weak and his health declined. He decided that the austere prescription of salt air and plain hard work would be the cure. Not many would give up comfort and privelege, but for two years, Dana served as a common sailor, given no special treatment as the gentleman he was, and lived in the forecastle of the Alert, eating the mess of salt beef and common hardtack, risking his life and serving under a captain crueler than most. Dana was able to write in such a way as to re-create the life on board a sailing ship, down to the smallest details and that's what makes this book so real and touching. You can feel the cold of Tierra del Fuego, taste the salt beef, and feel the wind and damp. What's more amazing is that Dana's carefully-kept journal was lost along with his other mementos of his voyage when he landed back on shore in Boston, due to some tragic carelessness of someone he entrusted with his chest of belongings. Yet he was able to recreate his voyage in loving detail and in some very excellent writing. Dana's later life as a lawyer was far from happy, though he made some critical contributions to maritime law. He died a poor and disappointed man, but left us the richer with his book. I just re-read it again for the tenth time, and it is fresher than ever. Read it along side of Moby Dick. It's American literature and American history and culture at its very best.

A Great Sailor: A Great Writer: An American Classic

Published by Thriftbooks.com User , 21 years ago
I waited 58 years to read Two Years Before the Mast! It was always on my list of books to read, but I had never reached it until recently, when my interest was sparked by a comment made by David McCullough (the author of the great biography of Truman) that this book greatly influenced him when he read it as a very young man. It is a a beautifully written book --- prose as good as any I have ever read. Dana's accurate and detailed narrative of his own life at sea on sailing ships in the 1830's, and his time spent on the coast of California,when it was true wilderness, is an unforgettable reading experience. The book has a personal intimate quality about; it is as if the author is a friend writing to you from abroad about his extraordinary adventure. This book deserves its esteemed place in American and world literature.

A Voice from Another Time and Place

Published by Thriftbooks.com User , 22 years ago
This book is a great in many ways - as history, as narrative, as travelogue, as social documentary and as Adventure, but I feel that it's probably fair to caution the modern reader that it's written in a style that he or she may not be used to - not flowery, but not spare either. You do get the sense that you're not reading a modern work. Aside from its other merits, it's great background reading for fans of the Aubrey/Maturin series by Patrick O'Brian, even though it takes place about 20 years after their last published exploits. Faults? Well, for my taste, there was perhaps a little more sailor jargon than I could take in (the version of the book I read, not this edition, had no diagrams). When he was going into great detail on sails and ropes, I skimmed past some material, but not too much, and was able to pick up the sense of what he was writing about, without necessarily being able to determine the precise difference between two types of sails on the same mast (call me Maturin). Overall, you get the sense that he spent two years in almost unceasing toil, and that life as a sailor in those days was not one that anyone today would envy. Also, since this was a recount of an actual two year voyage, there was perhaps one or two too many recounts of cruises up and down the coast for those seeking "adventure" reading, but this is an actual historical account, and can't be faulted for some slow pacing - I have no doubt it WAS awfully tedious at times (which the book is not). However, it has SO many other merits that any patient reader will gain much from it, particularly an authentic, well documented perspective from another time. So, read the book, but don't think you'll knock it off in one night, or that it'll read like Tom Clancy, or even Mark Twain. Nevertheless, read it anyway, it's well worth it.
Trustpilot
Copyright © 2022 Thriftbooks.com Terms of Use | Privacy Policy | Do Not Sell or Share My Personal Information | Accessibility Statement
ThriftBooks® and the ThriftBooks® logo are registered trademarks of Thrift Books Global, LLC