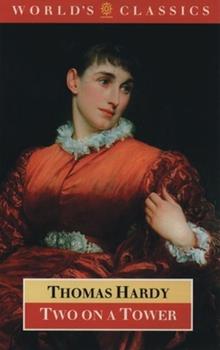 Two on a Tower is Hardy's most complete and daring treatment of the theme of love between characters of different classes and ages. This sensational tale, which some reviewers of the first publication considered to be immoral, is informed throughout by the astronomical images and reflections that preoccupied Hardy at the time of the book's composition.

Published by Thriftbooks.com User , 13 years ago
When you look at faded photographs of the aged Thomas Hardy (1840-1928) the elderly gentleman looks like anything but an insightful author whose speciality is the human heart. Bald! Stooped over and clad in black. An old man who loved old dogs, his old home in Dorset and old memories of the days of yore in his childhood home in the West of England. Yet Hardy produced some of the greatest novels in the English language. In this minor work of 1882 he presents us with a tragic/comic love tale of starcrossed lovers. Swithin St. Cleeve is a twenty year old amateur astronomer. Each night the young man ascends an old tower built on the site of a Roman campsight. The Tower is on the property of the Constantine farm. Swithin becomes acquainted with Mrs. Constantine whose name is Viviette. She is forlorn and lonely. Her wastrel and wealthy husband has left for a safari junket in distant Africa. Viviette is a romantic woman who dreams of poetry and love. She quickly becomes enamored of the Apollo of the Tower joining him for long evening sessions of watching the stars in panoply over the dark skies of Wessex. Her interest leads her to purchase expensive astronomical equipment for Swithin. With the improvements in the tower telescope the boy hopes to become famous as an astronomer. Perhaps, the couple dream, Swithin will become a member of the famed Royal Academy having his research work published to wide acclaim. Swithin does submit a paper for publication only to learn, to his deep chagrin, that an earlier scientist had already been published on the subject. Viviette and Swithin fall in love-she harder than he!. They secretly wed but are spotted in the town where they get the wedding license. Viviette's brother has seen them. He and the society in the village frown on marriage between two partners coming from different classes. Later, to her utter horror, Viviette learns that the odious husband she had thought had died in Africa was still alive at the time of her clandestine wedding to Swithin. Constantine did die in Africa but still breathed when the marriage with Swithin was consummated. Viviette also learns that Swithin will receive an annual bequest of 400 pounds per annum if he follows the instructions of his late benefactor a relative. The relative was a doctor who was a hater of marriage. Swithin will lose the bequest if he marries before he is 25! Therefore, the couple decide to keep the marriage a secret. Complications and accidents abound! Viviette decides that Swithin should have his career opporunities spiked by his leaving on a long scientific trip to South Africa. While he is gone she learns she is pregnant with his child. The couple had planned to publicly wed in a ceremony when he reached 25 but now this idea is scotched. Viviette has lost her fortune due to her husband's death. She hastily is wed to a dull, pompous, fat and old bishop. He dies soon after the wedding. She is left to raise the boy who is really the son of Swithi

Published by Thriftbooks.com User , 13 years ago
The language of Hardy is exceptional. His understanding of love and its motivations is too. If anyone else would have written this story, it would be worthless. Since he did, it's worth reading, though slow the first seventy-five pages and the ending is unexpected and unnecessary. I strongly suggest reading Wolf's Revolution for a story of this kind.Revolution

Two on a Tower

Published by Thriftbooks.com User , 19 years ago
Two on a Tower was the 11th Thomas Hardy's 14 novels that I have read. Hardy can be depended upon to paint a vivid picture of the characters' environment, and their relationships to it, but this time with a twist: One of the two characters being an astronomer, most of the environmental descriptions are of the heavens, and are wonderfully appropriate for the characters' actions and 'aspects'. Hardy had a gift of creating characters who are fascinating in their personalities and actions, and together with the environmental descriptions, reading his novels is just one step away from watching a really good movie of the story. Of all Hardy's varied characters, I felt the most sympathy for the two on the tower. Viviette has a great need for love and is selfless in giving it. Swithin, a somewhat naive and literate scientist, is at the same time a tender and faithful lover. Of all Hardy's stories, I hoped that this one would somehow have that "happy ending", and I suffered uncounted times for both characters. I highly recommend this book for emotional involvement, though it may tear you apart to read it! I would also recommend another of Hardy's lesser known novels The Woodlanders, which I understand was his own favorite story, and remains mine also.

Just another reason why Thomas Hardy is such a perfectionist

Published by Thriftbooks.com User , 20 years ago
Beautifully written, Thomas Hardy goes all out to make the reader see, hear, and smell every scene in this book. From begining to end, you never know what's going to happen next, and just when you think the story is calming down, Hardy throws a swerve your way. Great surprises, not predictable at all. Hardy perhaps one of the better describers of setting of his time, shows once again, why books were so highly read back in his age.Thomas once again delivered another great book of sadness, happiness, pregnancy and marriage. Although the story is mostly sad, it is still a great book, especially for those who have read previous Hardy books. A great read.

The story gets sadder the more I think about it

Published by Thriftbooks.com User , 22 years ago
The story of a lonely woman caught between love and propriety, self-sacrifice and self-interest, "Two on a Tower" is one of the saddest novels I've read. I kept hoping for a description of a blissful-but-brief interlude for Viviette, but it never materialized. Instead, unhappiness dogged her to the novel's cruel end. Yes, cruel. The final event in the book was an unnecessary stroke. Also, while I usually accept a character's actions, I cannot believe that Viviette NEVER anticipated becoming pregnant. The possibility certainly haunted ME from the moment her secret marriage took place. For all of it's sadness, however, the story is engaging and provides a criticism of the unforgiving social conventions of Hardy's time.
Copyright © 2020 Thriftbooks.com Terms of Use | Privacy Policy | Do Not Sell My Personal Information | Accessibility Statement
ThriftBooks® and the ThriftBooks® logo are registered trademarks of Thrift Books Global, LLC