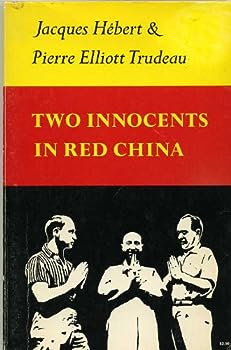 by Jacques Hébert and Pierre Trudeau

This description may be from another edition of this product. In the spirit of his father, Alexandre Trudeau revisits China to put a ground-breaking journey into a fresh, contemporary context. In 1960, Pierre Trudeau and Jacques H?bert, a labour lawyer and a...

An irreverent passionate look at 1960 China

Published by Thriftbooks.com User , 11 years ago
This is a rare and insightful piece of observation on China at a time and from a perspective that are hard to match. Following Hébert and Trudeau (senior) through their 5-week invited tour of various officially sanctioned sights in 1960 China is as much a reward for the frank historical observations as it is an enlightening exhibition of the personalities and interpretations that would later drive Canadian public policy toward the People's Republic of China. Framing the volume is Alexandre Trudeau's warm and thoughtful reflection on the significance of his father's voyage at the time, ultimately getting to the root of his childhood fascination with the title and the question of precisely who were the "innocents" in this case. There is definitely a joyous irreverence in the senior Trudeau's interactions with the group's official Chinese guide/handler that we can see and appreciate for its effect of bewildering and frustrating authorities while inspiring the group to press through the propaganda. For me, this book has the potential to examine the nature of leadership, questions of policy growth and effectiveness, and managed vs free intercultural exchange, as well as how China looked to Canadian eyes in the midst of the Cold War. It's a compelling read with a little bit of everything - in a very relevant and irreverent first-hand account of early contemporary China.
Copyright © 2020 Thriftbooks.com Terms of Use | Privacy Policy | Do Not Sell My Personal Information | Accessibility Statement
ThriftBooks® and the ThriftBooks® logo are registered trademarks of Thrift Books Global, LLC