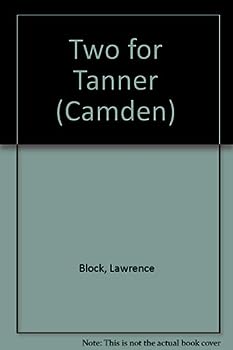 (Book #4 in the Evan Tanner Series)

This description may be from another edition of this product. Evan Tanner can't sleep. Ever. Which gives him plenty of free time to get involved in lots of interesting endeavors in all sorts of exotic locales. Now Tanner's in Thailand with a partially baked plan...

Published by Thriftbooks.com User , 14 years ago
Barry Eisler, Vince Flynn, and Brad Thor fans will love this Evan Tanner series, if they can keep their sense of humor and have some notion of what the world was like during the Cold War. I read the entire series in a heartbeat, every book in the series is book-candy. You must, however, read the first in the series first, The Thief Who Couldn't Sleep.

Not bad for Block's Tanner

Published by Thriftbooks.com User , 20 years ago
According to the author's note in the back of this book, "The Scoreless Thai," is the reprint of Block's 1986 novel "Two for Tanner." Block obviously likes puns in his titles and was, he says, puzzled and disappointed at the pointless title devised by the 1986 publisher. Anyway, the story has to do with Evan Tanner's adventures while venturing through southeast Asia in search of his girl friend, a jazz singer abducted during a tour. The title "The Scoreless Thai" derives from the traveling companion Tanner acquires -- a young Thai lad aching to lose his virginity. (Or did the young lad derive from the title?) The deal is that for having helped Tanner escape imprisonment, Tanner will see that this deflowering is accomplished. This is an amusing little novel with plenty of action. It doesn't suffer from the excessive cuteness Block can sometimes employ.
Copyright © 2020 Thriftbooks.com Terms of Use | Privacy Policy | Do Not Sell My Personal Information | Accessibility Statement
ThriftBooks® and the ThriftBooks® logo are registered trademarks of Thrift Books Global, LLC