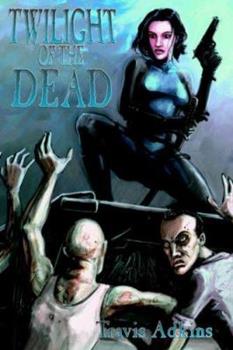 Twilight of the Dead

(Book #1 in the Twilight Dead Series)

Courtney Colvin was nearing the end of her teenage years when the undead apocalypse began. She survived, forsaking her youth and innocence, and five years later she continues to exist--albeit... This description may be from another edition of this product.

Excellent variation on a theme...

Published by Thriftbooks.com User , 15 years ago
"Twilight of the Dead" is Travis Adkins first journey into the zombie genre and he scores a knockout punch with this excellent novel. Taking the zombie tradition set down by Romero, Adkins takes the reader several years into the future, after the plague has had a chance to overtake the world (as far as we know). Survivors hold their own in a fortified township in the eastern U.S. A mysterious scientist arrives in town, and the citizens, including an elite squad of zombie eliminators called the "Black Berets", are suprised at the revelation the scientist reveals to them. The book starts off fast and has a very deliberate pace, driving the reader to the climax. I found the ending to be outstanding and moving, reminding me of the ending of the original "Dawn...". An additional treat of the special edition is the mini-stories after the ending. All of them are fantastic stand-alone stories that color the characters mentioned in the main story, describing how they ended up at Eastpointe. I was very pleased with the shorts. "Twilight of the Dead" is a standard for all fans of zombie literature.

Published by Thriftbooks.com User , 15 years ago
Twilight of the Dead is brimming with original ideas in a finely-tuned post-apocalyptic world. Travis Adkins has obviously put a great deal of thought into the practical aspects of the story as well as the undead themselves. Excerpts from fax transmissions, magazine articles & manuals are scattered throughout the book to establish Twilight's mythos without bringing the story to a jarring halt; and lead character Courtney Colvin lives in a believable self-sustaining community. But it's when she ventures outside the walls in pursuit of a cure that we get loads of sword-wielding, gun-toting action courtesy of Adkins' coolest idea, the Black Berets, and their hybrid fighting system designed specifically to combat the walking dead. Included in the Special Edition are 3 tales that go back in time and provide snapshots of personal dramas unfolding during the zombie outbreak. Adding approximately 80 pages of new story, these other perspectives help the reader realize the scope of the world that Adkins has created. Plus there's a lot more zombie-killin'. Twilight ends on a cliffhanger note and leaves the reader hungry for its sequel.

A Must Read for Zombie fans.

Published by Thriftbooks.com User , 15 years ago
It is five years after a Zombie Plague and most of humanity is wiped out. The dead are now the rulers of the world. Those still alive struggle to survive Courtney Colvin was still a teenage kid when the plague started, but somehow she survived in the nightmare world of the dead and found the fortified town of Eastpointe. She lives a quiet but lonely life. She isn't as content as the others in town. She wants to know if there are any other survivors. She soon gets her answer. A mysterious stranger arrives claiming to know the location of the antidote to the plague. To retrieve this cure, she and other survivors must leave the safety of Eastpointe and into a world of the flesh-eating dead. I love a good Zombie Story so when I seen Twilight of the Dead I had to grab a copy. It ended up being a very wise decision. Twilight is one of the better Zombie stories I've read and I have read just about all of them. Travis follows the Romero style Zombie formula, but he adds his own twist that I thought was very clever and entertaining. It gives the Zombie Genre a real boost. You can tell from Travis's writing style that he is more than just a fanboy. He has real writing skills, and I think that he has a lot to offer to the Horror Genre. Travis has written a story that was very character driven. A lot of times in Zombie stories the author focuses so much on the gore, carnage, and action that the character development suffers for it. Travis doesn't make that mistake. The gore, carnage, and action are there, but he takes the time to develop the characters. I didn't find one that was Wooden or Hollow. Twilight takes off on the first page, and it never lets up. Travis created a world that completely consumed me, and that is a sign of really good storyteller. I didn't want Twilight to end. It also moves at a very fast pace. There wasn't a single spot in this story that bored me. It was a true pleasure to read. The only complaint I had was the way the it ended, but I found out Travis plans a sequel so that took care of that. I recommend Twilight of the Dead to anyone who loves an original and character driven Zombie story. Travis is a very good writer and I cant wait to to see what he has in store for us in the future. Twilight of the Dead is one of the best stories the Zombie genre has to offer.

Published by Thriftbooks.com User , 15 years ago
From start to finish this book keeps you on the edge of your seat. The characters are believable, and the story is action packed and interesting. Once you pick it up you won't want to put it down. I can't wait for the sequel!

Published by Thriftbooks.com User , 16 years ago
"Twilight of the Dead" is an entertaining gore fest and a gripping read. With relatable characters, clever illustrations, and a plot that builds momentum like a freight train, "Twilight" is a solid entry in the zombie genre. In a world overrun by the undead, society exists behind the walls of Eastpointe, a commune of determined survivors. Here is where Courtney Colvin lives, and tries to piece together her life after the end of the world. However, Courtney is also a Black Beret, a zombie killer. When a stranger arrives at Eastpointe's gates promising a cure to the undead nightmare, Courtney and her fellow Berets must brave an abandoned wasteland of the undead to find the cure and help the last remnants of humanity. But when the team arrives at their destination, things are not as they seem and about to get a whole lot worse... With original twists and good old-fashioned suspense, Twilight of the Dead is a must have for any zombie fan, or indeed any fan of the horror genre. Highly recommended. - Meghan Jurado, author of "Dead World", featured in The Undead
Trustpilot
Copyright © 2022 Thriftbooks.com Terms of Use | Privacy Policy | Do Not Sell My Personal Information | Accessibility Statement
ThriftBooks® and the ThriftBooks® logo are registered trademarks of Thrift Books Global, LLC