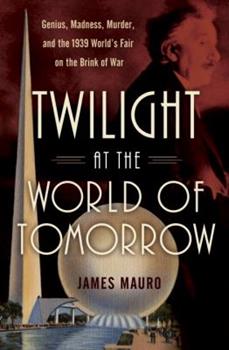 Twilight at the World of Tomorrow: Genius, Madness, Murder, and the 1939 World's Fair on the Brink of War

The summer of 1939 was an epic turning point for America--a brief window between the Great Depression and World War II. It was the last season of unbridled hope for peace and prosperity; by Labor Day, the Nazis were in Poland. And nothing would come to symbolize this transformation from acute optimism to fear and dread more than the 1939 New York World's Fair. A glorious vision of the future, the Fair introduced television, the fax machine, nylon,...

Published by Thriftbooks.com User , 12 years ago
This is narrative nonfiction, cultural history. Einstein represents the high and Grover Whalen, a gifted showman, the low. The fair is beauty and bombast. To Robert Moses it is a case of beauty and ashes because the site of the Fair is Flushing Meadows. Reclamation and solving the odor problem are challenges the planners have to meet. It is to be a park after the Fair. (Robert Moses is already famous for having created Jones Beach.) Mayor LaGuardia has a contentious relationship with Robert Moses, calling him His Grace. A world's fair attracts agitators. It is 1940, the second year of the New York World's Fair, the Polish exhibit is draped in block, and Joe Lynch of the NYPD is on the bomb and forgery detail. A fellow officer of his is Freddy Socha, another college man, is present. The squad is a fast track to promotion. By June bombings are deadly. Einstein has resigned from the Prussian Academy and renounced his Prussian citizenship. He has been in the United States since 1933. Grover Whalen's job history is moving from the Wanamaker Department Store to Police Commissioner under Mayor Jimmy Walker. Fortunately for him he is discharged long before Walker's testimony before the Seabury Commission in 1932. Artists form a Fair of the Future Committee. Lewis Mumford is one of the progressive thinkers supporting its existence. The Fair's theme is to be about the building of the world of tomorrow. The first foreign contract to erect a pavilion is Soviet. After Italy signs, sixty-two other nations follow. Major corporations including Kodak, A.T. & T., RCA, Heinz are next. Interest is so great it becomes difficult to situate all of the exhibitors. There is massive press coverage. Einstein is pressed into giving a speech the opening day. He speaks of cosmic rays. When circuits are overloaded and blackouts result, Fair CEO Whalen arranges to have the fireworks put on display immediately. For Whalen the Fair represents everything. Futurama is popular. Throughout the run of the Fair the waiting line fluctuates between one and three hours. The exhibit gives the illusion of flying. Einstein says that the World of Tomorrow is a dream, but it is worth fighting for. During the first July of the Fair, lay-offs and reduced pay became necessary, and operation of the Fair is given, the following month, to someone more business-minded than Grover Whalen. Bombs explode on the Fourth of July the second year of the Fair, killing Joe Lynch and Freddy Socha. The Fair runs at a deficit of millions. (The 1946 New York World's Fair ends in bankruptcy.) This is history writing at its best.

A JOURNEY BACK IN TIME

Published by Thriftbooks.com User , 12 years ago
Mauro's Book, to me, was well researched and fascinating. I picked it up as a long summer read expecting a heavily factual account which would would require considerable dedication to process all the detail (I was willing to allot the time, as the 1939 World's Fair had always intrigued me). Instead, I found the book read like a fast paced fiction novel, flowing smoothly and containing real characters as interesting as any created in fiction. Mauro's has blended all the facts into a cohesive well written storyline that revisited a period in history that was indeed a twilight for so many countries that lost their freedom in the begining of World War II. What was more poignant then the pavilions of occupied countries standing empty in 1940? Mauro's extremely skilled presentation of the complex characters and machinations involved in bringing the Fair to fruition and then overseeing its run, required intensive research. I found the grouping of the various storylines particularly entertaining. I rarely immediately reread a book, but in this case, I will make an exception. I look forward to revisiting thelittle facts that I might have missed.

Published by Thriftbooks.com User , 12 years ago
As an aficionado of World Fairs, I pretty much figured I would really like "Twilight at the World of Tomorrow" but I could never guess how much. Author James Mauro weaves dozens of real-life people through his story of the creation of the 1939 NY World's Fair, some you've heard of (Einstein, FDR) and some you probably haven't (the one-of-a-kind Grover Whalen), all of them vividly coming to life. There's tons of new facts I learned from this book, but "Twilight" is never tedious or overloaded with minutiae. A great book.

Saddle Up Those Rats!

Published by Thriftbooks.com User , 12 years ago
First, let me explain that title.....The site they picked for the 1939 World's Fair was in Flushing Meadows, Queens, and up till that point it had been a garbage dump. A BIG garbage dump. When Robert Moses, Commissioner of Parks, toured the site before construction had started he joked that he had seen rats "big enough to wear saddles." (Funny guy, unless you got in his way, but that's another story......see Robert Caro's "The Power Broker" for an excellent biography of Moses.) The book is full of little comic gems like this. We have lightbulbs at the fair being changed for a cost of $8.81 per bulb, equivalent to about $100 today according to the author, because any electrical work, including installing new lightbulbs, had to be done by union members. Another funny story concerned license plates. One of the key players in creating and building the fair was Grover Whalen, who was a master of public relations. "In 1938 he convinced Governor Lehman to allow the words New York World's Fair 1939 stamped on every automobile license plate in the state.......One particular cynic, a forty-two-year-old mechanic from White Plains named Martin McBohin, expressed his displeasure by covering up the offending ad with electrical tape and subsequently got himself arrested for defacing a license plate. Before his trial he announced to the press, 'Next thing you know the State will compel us to advertise someone's corn flakes.' " Of course, the Einstein connection is one of the most interesting parts of the book. Einstein visited the fair as an official guest and gave speeches, but he also visited as a "comman man" who just wanted to see the sights. And as we are talking about the 1939-1940 period, the author also covers the eventually successful attempt of Leo Szilard and other physicists to get Einstein to write a letter to President Roosevelt warning him of the possibility of Nazi Germany's developing an atomic bomb. Down the road, Einstein's letter eventually led to the creation of the Manhattan Project. (The author also mines some humor from Einstein's quirks. Seems he liked to walk around sockless and in sandals, wearing baggy trousers held up by a rope! One time Einstein walked into a general store out on Long Island and asked, in his thick German accent, for what the storeowner thought was "sundials". Turns out Einstein's footwear had worn out and he actually wanted sandals.) The book is more than just humorous anecdotes, though. We learn about the business side of things. The fair was a huge disappointment, financially. Attendance was much lower than expected and the fair lost money. Bondholders were upset, as was Robert Moses, who was promised some of the non-existent profits. He planned to use the money to create one of his beloved parks, in Queens. And throughout the book we also follow the exploits of two New York City detectives named Joe Lynch and Freddy Socha. Throughout most of the book we wonder why so much time is devoted to them and what connect

Published by Thriftbooks.com User , 12 years ago
I have to admit to having a fascination with the Worlds Fairs in New York and worried this book would either be an overdramatic novelization or a dry as bone read. I was pleasantly surprised, instead, to find a well written and engrossing true-tale - written using historical documents as the basis upon which to build the story of the Worlds Fair. After only a few pages, you're hooked as you learn about the persons and personalities behind the 1939 Worlds Fair. Those who thought it up, organized it, worked it, and ultimately the celebrities that visited it. There are a lot of fascinating facts interwoven with the narrative and never once was I bored with the book. The author writes in such a way that you really get a 3-dimensional picture of the people - they are never caricatures or poorly fleshed out. Each feels like someone you might have known and that really makes the read that much more engrossing. I think it is important to note that this is really about the people behind the fair and not the fair itself. You won't necessarily get a feel of what it was like to be there or experience it - that's for historical or coffee table books. Instead, you'll get a feel of what it was like to live at this time with all the factors that were going on behind the scenes of the build up and then end of the fair. I was VERY glad to get this and I highly recommend it for history buffs or those who really like the whole idea behind the World Fairs. There is always so much going on behind the scenes and it is clear the author highly researched and really got into the mindset of the people at the time.
Trustpilot
Copyright © 2022 Thriftbooks.com Terms of Use | Privacy Policy | Do Not Sell or Share My Personal Information | Accessibility Statement
ThriftBooks® and the ThriftBooks® logo are registered trademarks of Thrift Books Global, LLC