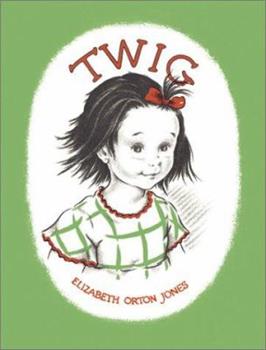 Twig was just a plain, ordinary little girl who lived on the fourth floor of a "high sort of house" in the city. The back yard behind that house was Twig's little world. It was a bare little world,... This description may be from another edition of this product.

Published by Thriftbooks.com User , 16 years ago
Twig was my favorite book as a child, and one of my happiest childhood memories. I checked it out of the library so many times, that finally my parents bought me my own copy for my ninth Christmas. It is still one of my most treasured posessions. I could relate to Twig. We were both poor little city girls, who found enchantment with objects found in the backyard and our big imaginations. It truly shows that children do not need material objects to have fun, and that the simple things in life are the best. I enjoyed reading this book to my own little girls. If you love fairies and elves, and wonder what it would be like to see your backyard from their perspective, than you must read this book!

Published by Thriftbooks.com User , 18 years ago
Twig was absolutely my favorite book as a child.It went out of print for a number of years. The children's books available now are wonderful, and many times more numerous than when I grew up, but it would have been a great loss to not reprint Twig for the 21st century. My six-year-old daughter and I have read it through several times. Twig is about how wonderful a little imagination and some ordinary objects and animals can be in creating a rather complex and marvelous fantasy world. What little girl would not love her own fairies? Twig is poor in worldly goods but very rich with creativity. I keep telling my kids that the best things in life are free; this book definitely is proof!!

Twig, come play in my yard!

Published by Thriftbooks.com User , 19 years ago
This is a simple book about a girl in a city who meets "Elf" and becomes small through his magic. She retains her "little girl" qualities while exploring the local natural history (including Elf's pet cockroach!) from the perspective of her new size. It is a fairly easy (though there are linguistic aspects that one might expect to find in a more advancedbook) episodic read, and it is enchantingly sweet and old-fasioned without being sentimental. _Twig_ was the only book that kept my daughter happy when she was ill over Christmas. She smiled though her fever was high. She slept with the book beside her so she could read it when she awoke. The simple chapters reminded her of the joy and fun there is in the world.

Welcome Back "Twig" and "Big Susan"

Published by Thriftbooks.com User , 19 years ago
"Twig," the story of a little girl who believes in fairies and befriends an elf. "Big Susan," the story of how a little girl's dollhouse dolls come alive to give Susan a wonderful Christmas present. No, I didn't buy these books. Why? I already own them from my childhood some 50+ years ago. And I've already purchased them years ago for my granddaughters...paid a good price for them, too, as they hadn't been reissued and I searched high and low in order to get them as collector's items. Are they worth it? ABSOLUTELY. Elizabeth Orton Jones was born on "half-past-Christmas" (in her own words...and I won't tell you the year, but suffice it to say she's not a young woman). I last spoke with her and corresponded with her about eight years ago and she was kind enough to autograph all of her books for me. I asked her then about the possibility of her books being reissued and she laughed, saying they were too old fashioned. Well, I'm glad to see she was wrong. The people in the town she lives in (in New Hampshire) call her Twig and put on the play just about every year. Big Susan's actual dollhouse is in Highland Park, Illinois. Twig, "Twig," and "Big Susan" will live forever. I salute you, Elizabeth Orton Jones...for these two books and the others you have written that have not yet been reissued. I hope they will be some day.

Published by Thriftbooks.com User , 20 years ago
[...] Just expect Fairies and wonderlands to materialize in this book and they will!This is a wonderful classic children's book that never should have been allowed to go out of print! I read this each year to the delight of my fourth grade students from my old worn copies. The books I have belonged to my late great aunt Betty Holden, an elementary teacher in Palo Alto. She read it to me in the `60s, since then it has been one of my favorite children's' books; (I am 47 now) She wrote a note in one that says the book would always remind her of a teacher of her own. This is real children's literature of rare and classic quality.Set in the early part of the century in the bare dirt back yard of a rundown inner city tenement, the happy, imaginative optimism of a little girl alone at play creates a world that is anything but dreary. We are introduced to the reality of Twig's little world through her point of view while she walks four flights down the back porch stairways of the building past each occupant and an active bird nest. The reader sees that this is where Twig collects the fodder of reality that she soon projects into her fantasy dreamland when she arrives on the ground to play. We can tell she idolizes the beauty of a young wife, shows respect and bemusement at the old spectacled landlord who gives her gum, etc. In the dirt of the back yard, she transforms a ripped tomato can, a dandelion, a gum wrapper, toothpaste tops, bottle caps, a trickle of water, the sparrow family, "Old Girl" the cat and "Old Boy" the ice-wagon horse into a marvelous imaginary realm of a setting in which to invite an elf named 'Elf' and a Fairy Queen. During the enchanted tale, Twig magically transforms to become one in size and spirit with her newfound imaginary friends, which of course, seem quite plausibly palpable by this point in the story. The writing is wonderful and so are the gorgeous, rich, sweet and tender illustrations that so seamlessly guide and enrich ones imagination in enhancing context to the story. This is an easy story for children to become absorbed with. It is written with a genuine childlike perspective. But there are also subtle and amusing social commentaries and some neat literary devices as well. Twig projects woes into Sparrows' life based upon marital difficulty she sees in the apartment, for instance. The book is sophisticated enough that one is aware of being able to read nuance into it on a number of levels. One inventive chapter goes off on a discouraging tangent, as one's imagination may, and so is repeated anew with the proper optimistic twists and ending that keep the story alive. I particularly like the stories' closure when; at the last possible moment she declines the opportunity to fly off with the fairies. It is here that we see, as the fairies flutter off quietly on the Royal Magical Cobb-Webb Kerchief, that Twig comes to terms with the fact that, after all, she is just a plain, ordinary little girl, who hears her mother calli
Copyright © 2022 Thriftbooks.com Terms of Use | Privacy Policy | Do Not Sell My Personal Information | Accessibility Statement
ThriftBooks® and the ThriftBooks® logo are registered trademarks of Thrift Books Global, LLC