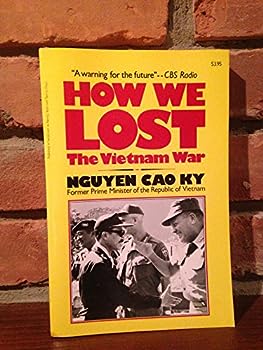 How We Lost the Vietnam War

Nguyen Cao Ky served as South Vietnam's prime minister and its vice president during the years of the Vietnam War's escalation, and of subsequent criticism of the war from the U. S. His memoir... This description may be from another edition of this product.

Published by Thriftbooks.com User , 15 years ago
Doesn't anybody in our government read history? South Vietnam didn't want Communism, but they weren't exactly excited about American Democracy. And, in our simplistic American way, we didn't understand we could not impose our system on top of the South Vietnamese. Ky's assessment of America's mistakes are, in parallel with the mistakes we are making in Iraq--just as we didn't give South Vietnam what they needed to win and gave them what we thought they needed to win--so we are doing the same thing to the newly elected government of Iraq. Ultimately, Congress cut and ran on the deal Nixon made with South Vietnam. South Vietnam was overrun by North Vietnam who had the full military support of the Soviet Union. We abandoned the South and let them be crushed, while the Communist stayed true to the North and made them the victors. Looks like we are going to cut and run in Iraq. Same losing strategy, different war.

how we lost the vietnam war

Published by Thriftbooks.com User , 16 years ago
well written and very informative. Since i have met the author , i enjoyed the book more. I also served in viet nam two tours in the late 60's

A VALUABLE HISTORY LESSON AND AN INTRESTING PERSPECTIVE.

Published by Thriftbooks.com User , 23 years ago
I assumed this would be another book bashing of our Vietnam experience.Instead this was an interesting perspective from a major player in this historic endeavor.It provides a timeless truth leaders and foreign policy makers seem to ignore but must learn if we are to enjoy successful foreign policy.LESSON:"Applying Occidental solutions to Oriental problems is a recipe for failure!"When Ky said "WE lost" he is not refering to the American military but to the American and South Vietnameese Policies and approach to the conflict.Nguyen Cao Ky professes to have uncompromising values and being above the corruption that infected the politics and policies of the South East Asian war. His definition of corruption may be very different from that of a westerner. Regardless if it is in Vietnam, Somolia, Haiti, Iraq, Bosnia or now in Kosovo, the American politicians and military leaders are destined to fail if they persist in not learing that "You cannot project your values, beliefs and customs on an alien culture and expect success".RVN Class of "68"
Trustpilot
Copyright © 2022 Thriftbooks.com Terms of Use | Privacy Policy | Do Not Sell or Share My Personal Information | Accessibility Statement
ThriftBooks® and the ThriftBooks® logo are registered trademarks of Thrift Books Global, LLC