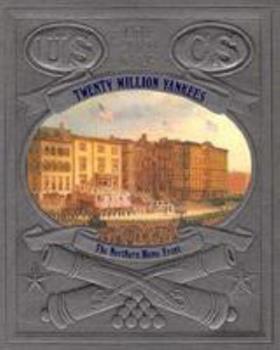 Beautifully bound and illustrated volume on the Civil War featuring Twenty Million Yankees, the Northern Home Front. This description may be from another edition of this product.

Life in the North during the Civil War

Published by Thriftbooks.com User , 21 years ago
In a sense, "Twenty Million Yankees: The Northern Home Front" is one of the secondary books in the Time-Life series on The Civil War. After all, this book by Donald Dale Jackson and the Editors of Time-Life Books does not talk about battles or generals, politicians or issues. What it does do is look at what things were like for the common folks back home (a similar volume, "Confederate Ordeal" looks at the Southern side of the equation). Chapter 1, "Fissures of Dissent," looks at the political divisions that existed in the North, personified by men such as New York "Tribune" publisher and self-appointed gadfly Horace Greeley and Ohio Congressman Clement Vallandigham, hero of the Peace Democrats. Chapter 2, "The Enterprising Union," covers the economic machine that fueled the Union war effort. Chapter 3, "Mustering the Legions," details how recruitment eventually gave way to the first military drafts. Chapter 4, "An Artery of Love," focuses on the Sanitary Commission that was established to support the soldiers in the field. Chapter 5, "The Political Battles," covers the Presidential election of 1864 in which Lincoln defeated former general McClellan. The book ends with several full-page photographs of Lincoln showing how he changed over the course of the war. "Twenty Million Yankees" has the virtue of covering in more depth topics that are normally not part of the record when reading about the great battles of the Civil War. Consequently, a lot of what you read in here will be new information, even for the serious Civil War buff.
Trustpilot
Copyright © 2022 Thriftbooks.com Terms of Use | Privacy Policy | Do Not Sell or Share My Personal Information | Accessibility Statement
ThriftBooks® and the ThriftBooks® logo are registered trademarks of Thrift Books Global, LLC